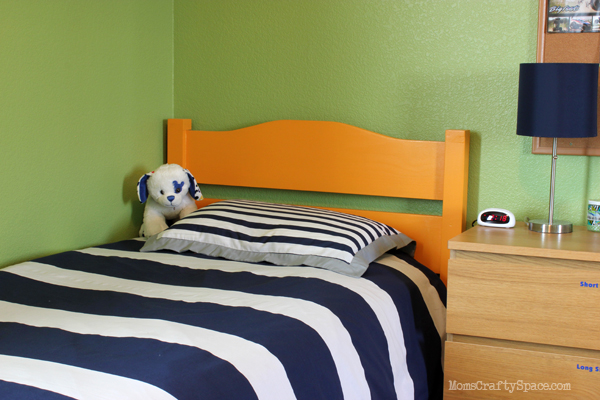 Ever since we switched the boys rooms around awhile ago, we’ve been working to give each of the new bedrooms a facelift. Our first project was one of necessity – Sawyer needed a new bed since he inherited a room from Simon who had been sleeping on a floor mattress due to his recent transition out of his crib. I had envisioned a lovely Kentwood bed to compliment his freshly painted Apple Green walls and new navy rugby striped duvet set, but Sawyer and Mitch had other plans.They both agreed that their favorite bed was the Pioneer bed, and Sawyer had only one request…it HAD to be painted orange. 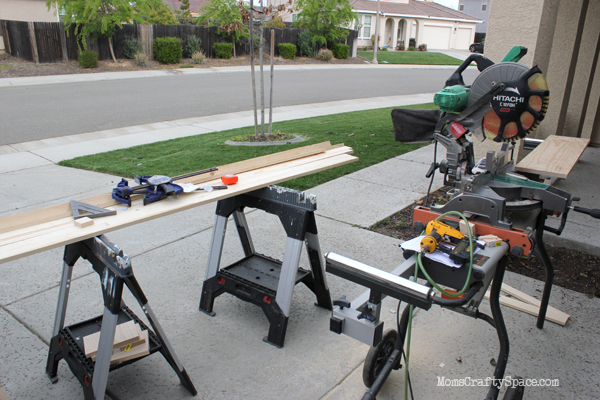 We printed out the plans from Ana White, and set up all of the tools and wood. 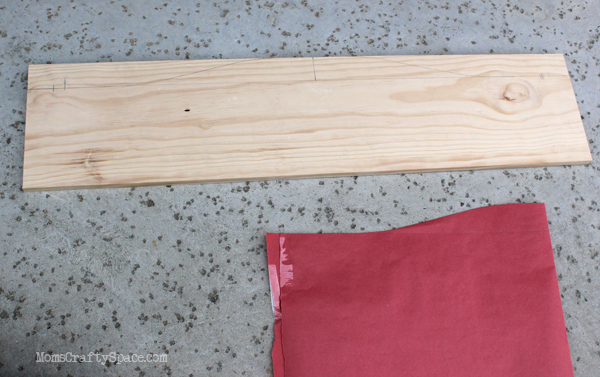 To create the curve of the headboard I folded a large piece of paper in half and marked a line 2″ down from the top edge. I freehanded a curve from the top center of the paper to the outside edge and cut through both layers of paper to ensure that it was symmetrical. I traced the curve on to the headboard piece and used the jigsaw to cut it out. 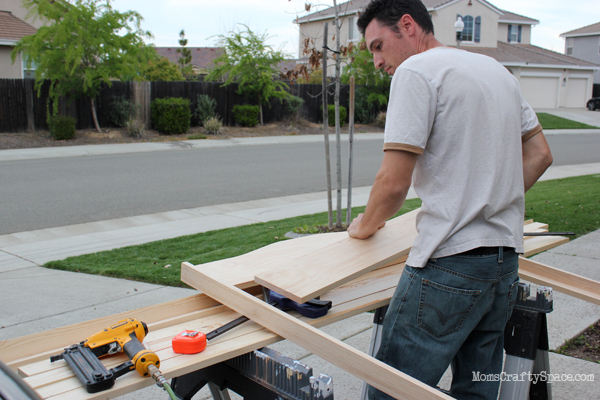 Honestly, bed building isn’t really my thing. Using power tools is super fun and all, but for some reason I never really got too excited about the building phase of this project. I passed off the construction work to Mitch and went inside to keep Simon busy and away from the pile of tools in the driveway. 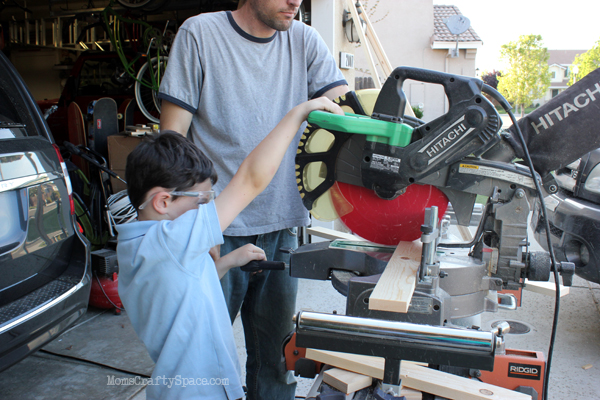 It’s a good thing that I was in the house because I’m sure that I would have had a heart attack if I had seen how much “help” the big boys had contributed. That’s my six-year-old and a miter saw. (I know that I’m going to get horrified emails about this photo…) 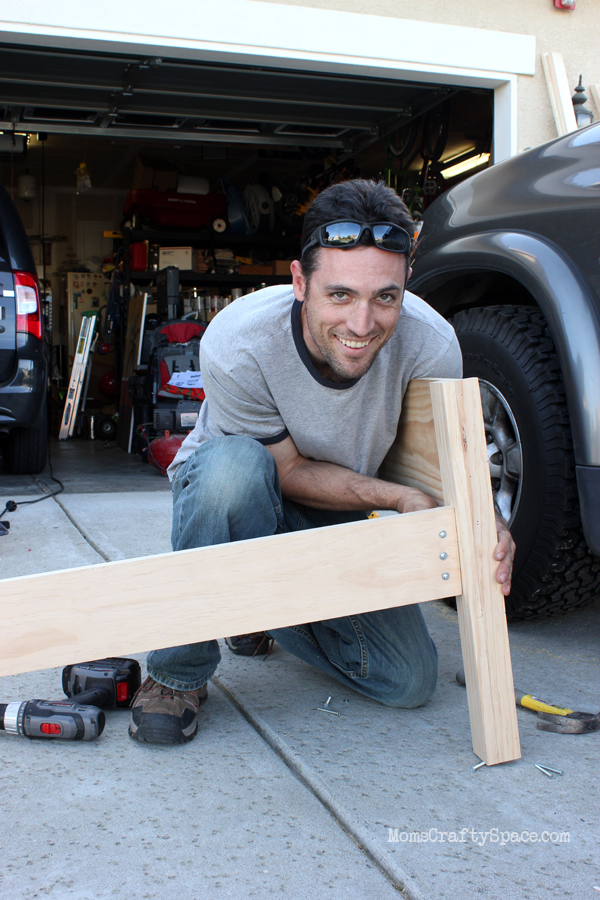 Seriously though…look at how happy these guys are when they’re building things. They didn’t really need my help with this part anyway, right? 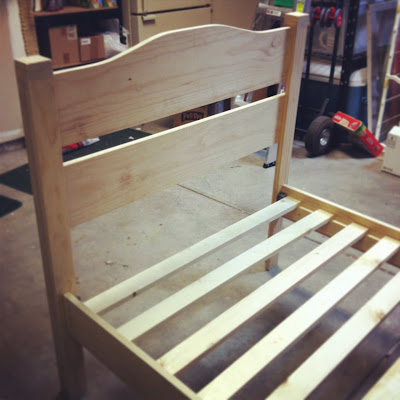 Mitch altered the original plans just a little bit so that our bed has brackets that make the parts easy to assemble and disassemble. We took it apart again to paint it, but we just wanted to make sure it all worked first! 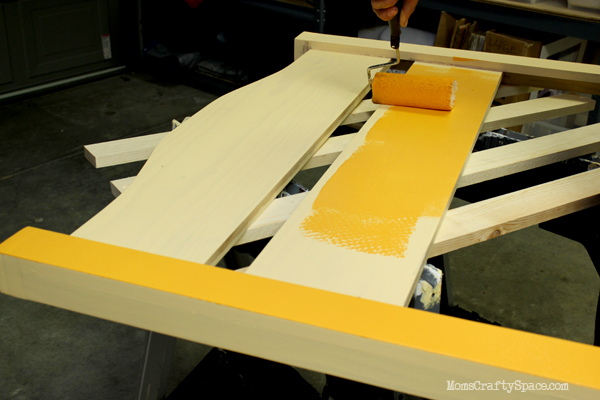 The bed got one coat of tinted primer and two coats of paint. 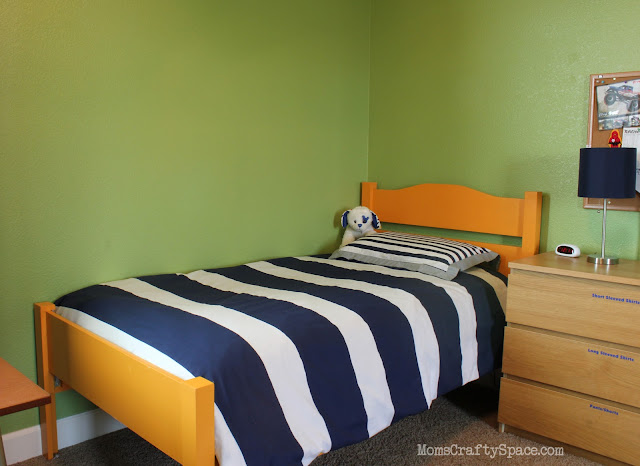 Finding an orange paint that didn’t look completely hideous against the apple green walls was a bit of a chore, but we finally went with Toasted Pumpkin. I think it works pretty well as an unexpected pop of color that doesn’t totally overwhelm the space. I’m working on some LEGO-inspired wall art that will help to tie all of the colors in the room together. 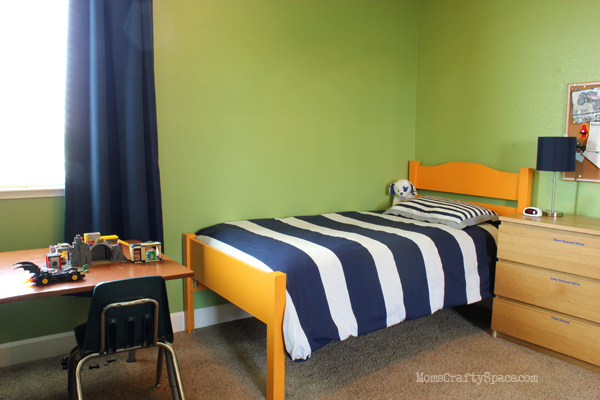 Mitch opted to use a flat foot board instead of repeating the curve of the headboard – this way the foot of the bed doubles as an extra seating area for the LEGO desk. Sawyer loves his orange bed, and says that it’s exactly what he wanted. Yay! 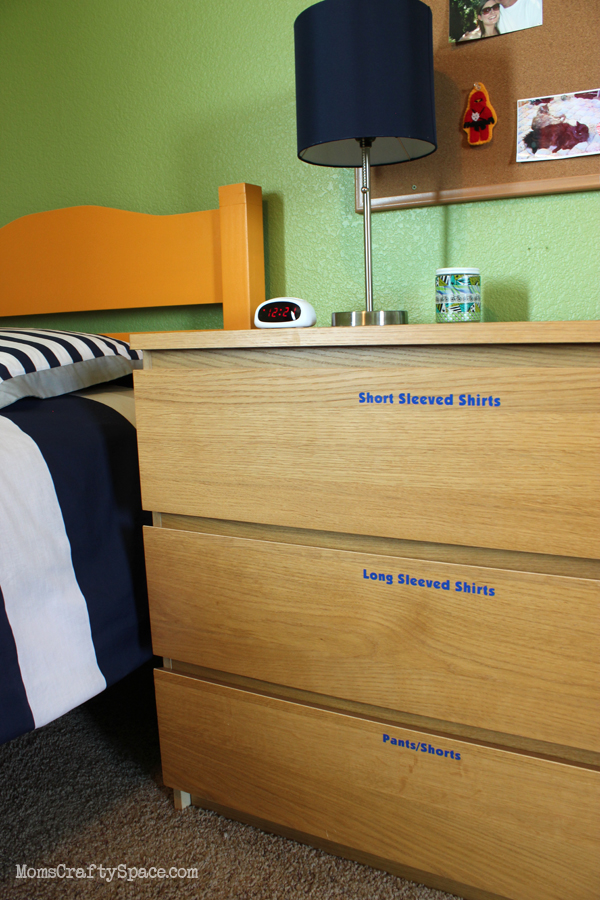 This Ikea dresser will be getting a paint treatment at some point as well, but in the meantime I labeled each of the drawers so that nobody (ahem, kids and grown-ups!) can tell me that they don’t know where the clothes go! Works like a charm!