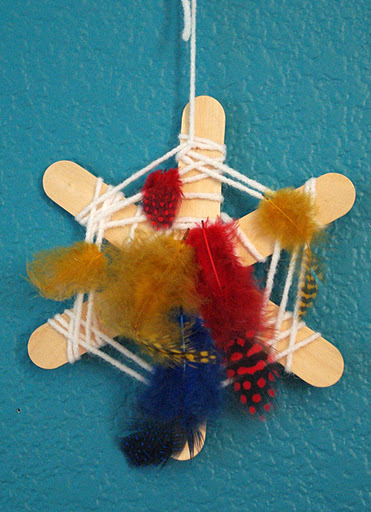 A couple of months ago my boys started having some bad dreams (usually about spiders or rattlesnakes), so we whipped up these little dreamcatchers with some yarn, feathers and craft sticks. They worked like a charm until last week when Sutton started having nightmares about big black widow spiders again. He told me that his dreamcatcher must be so full of his old bad dreams that it couldn’t hold any more. We took his dreamcatcher over to the garbage can and shook out all the bad dreams to empty it, but since he was still a little hesitant to go to sleep we decided to make one more big dreamcatcher to go in the middle of both boys’ beds. This time we meant serious business. 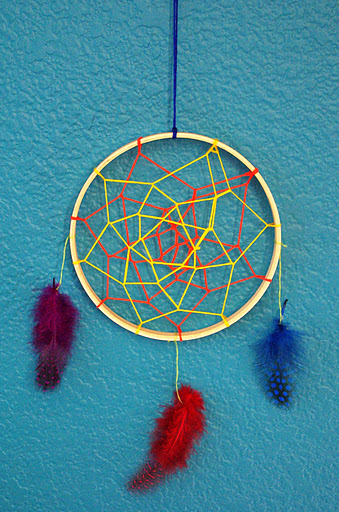 I used the center ring from a 4″ embroidery hoop and embroidery floss to create the web. The boys requested a rainbow dreamcatcher, so I made sure that each color was represented in some small way. It’s hard to see the green, but it is used to tie the feathers to the dreamcatcher. So far this new dreamcatcher is working its magic very well! Sutton seems to think that his old dreamcatcher works by catching bad dreams and letting only the good dreams come through, but that this new one has magical powers that allow it to catch bad dreams and then actually turn the bad dreams into good dreams. That way it won’t get filled up and stop working like the old one did. He has even come up with his own little routine of talking to his new dreamcatcher at bedtime and reminding it to catch all of his bad dreams and turn them into beautiful ones. ♥
For a great tutorial on how to easily create your own dreamcatcher, check out this post over at Natural Kids.