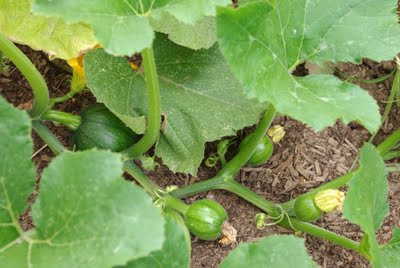 We weren’t sure if our garden was going to get planted this year. The weather was cold and wet, money was tight, the baby (and consequentally the Mommy as well) had been sick for months without a break, and by mid-May we didn’t have a single plant in the ground (other than our perennial strawberry patch). I was disappointed because gardening is a big part of what we do around here, but I honestly didn’t have the energy to worry about it. I figured it was just another one of those things (like putting Christmas lights on the house) that tends to get pushed aside on years when we’ve been exhausted from having an infant in the house. Next year’s garden will be bigger and better, I told myself.
Eventually Mitch emptied out our compost bin that had been filling up with rich soil since last Summer, filling up the empty garden boxes and turning the bare soil. A week later, we started to notice sprouts of green appearing from the fresh compost. The culprit? A pumpkin that hasn’t gotten hacked up enough before being thrown into the compost pile. It was a relentless little guy too…spewing forth sprout after sprout from its numerous seeds until one of the garden boxes was completely overflowing with pumpkin vines. Seeing all that fresh green was all the motivation I needed to put my garden plans back into action. 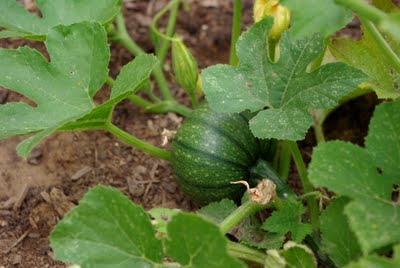 We transplanted a few pumpkin vines back to our usual pumpkin patch area since they had sprouted in a too-small raised bed usually dedicated to zucchini and yellow squash. I truly had enough pumpkin seedlings to start my own pumpkin farm, but in the end I transplanted just six of the strongest plants. Today there are already six little pumpkins beginning to grow, and I {LOVE} that they came from nothing other than the hard work we put into them last Fall. True, they’ll probably be ready far earlier than I want for the Halloween season, but I didn’t choose when they were planted and sprouted, so I’ll take what I get 🙂 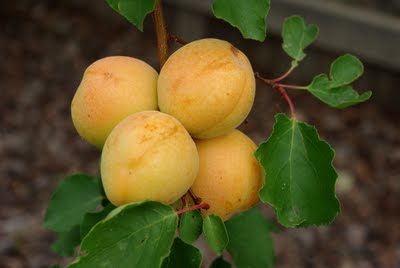 Our apricot tree’s limbs are drooping down with the weight of its first bounty of fruit. We only planted the tree last year, so I am surprised that there are so many apricots on it in its first year of producing. I’m terrified that the birds are going to eat them, so we’ll be busy this weekend netting the tree or tying mylar strips on it or something to keep the birds away (anyone know what works best?). They already stripped my poor blueberry bushes of all their lovely fruit, so I’m really hoping that we’ll get to enjoy our first crop of apricots without the birds spoiling the fun. 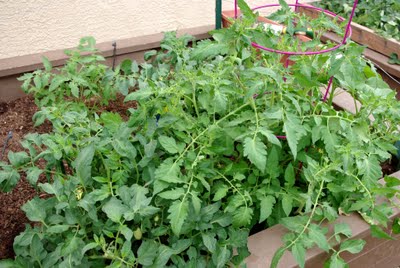 In my rush of motivation I ended up buying two Roma tomato plants from the nursery, but as soon as I planted them I began noticing teeny tiny baby tomato plants popping up around the rest of the bed. In the same form as the pumpkins, a few of the tomatoes that had fallen last year had gone to seed, and I now have four large tomatoes that are starting to grow like crazy along with who-knows-how-many-more seedlings hiding underneath those plants! I have been harvesting the seedlings and re-planting elsewhere in the garden since we don’t really want more than 4 plants in this bed. It looks like they are Roma and Amish Paste (and possibly one Better Boy), which is perfect since we don’t actually eat many fresh tomatoes, but I can and preserve a TON of homemade pasta sauce, stewed tomatoes and salsa each year. This year Sawyer has expressed an interest in making his own ketchup, so we might attempt that too if I feel ambitious enough.
Our strawberries came back with a vengance, overlowing their bed and also starting new plants among the rocks outside the bed. We ate juicy red berries most every day in May as well as putting up some strawberry jam. The boys planted carrots and lettuce, which was beautiful until our friend Mr. Jackrabbit found the salad bar and wiped it out. I managed to save the carrots, and we’ve already replanted the lettuce up on a ledge, so hopefully it won’t be disturbed this time (sorry, bunny.). I ended up buying one single zucchini plant and some basil. It’s only been a few weeks since all the plants went into the ground, but they are already providing us with some yummy fresh additions to our dinner menu. I’m incredibly grateful that I’m able to step out my back door and choose fresh produce for my family, and I’m glad that I managed to get back a bit of my gardening mojo this year.
In the end, the garden is an abbreviated version of its usual self with far fewer plants and varieties, but I truly couldn’t be happier with the way it turned out. Not to mention that the boys have been having a blast digging and driving their toy trucks and tractors through the dirt in the one garden bed that will remain empty for this year. I love the fact that I only bought four new plants, yet my garden is overflowing with life brought forth from last year’s harvest. It has definitely inspired me to preserve and put up seeds for next year as well! We still have dreams of a bean teepee/sunflower hideout area, but I think this weekend will be our last chance at getting it in the ground so that it will still have time to grow before the season is over. It’s supposed to be 102 degrees on Saturday, so we’ll see what happens 😉 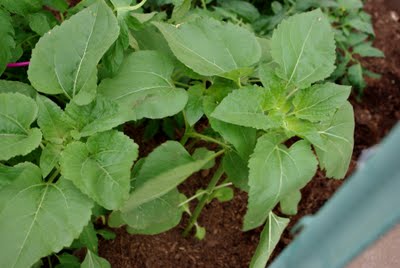 Oh, and one last thing…can anyone identify these mystery plants that have also emerged? They’re hiding out with my tomatoes, but I didn’t want to move them until I know what the heck they are. Guess I have some research to do! 🙂

They’re sunflowers, thanks! Looks like I’m already further along on that bean teepee/sunflower hideaway than I thought! Hopefully they’ll transplant well! 🙂