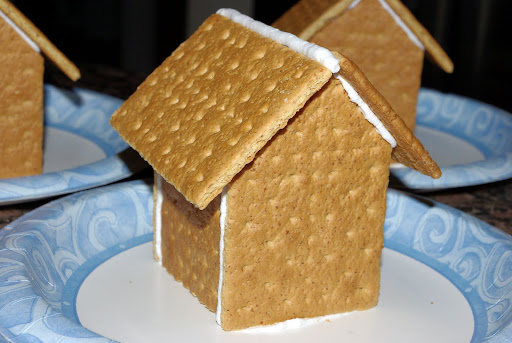 Do you remember when I made a gazillion of these little guys for my boys’ school last year? Well, I’ve received a ton of emails asking me about the construction of them and how I cut the graham crackers, so I decided to do a tutorial for y’all this year (which might also help me out next December since it took me a few tries to get it right again this year!). You’ll need five graham crackers for each house. Honey Maid graham crackers are great – nice, flat, and straight – but if you cheap out and buy the generic kind like I did, you might need to be a bit fiddly to get the edges to line up as nicely. 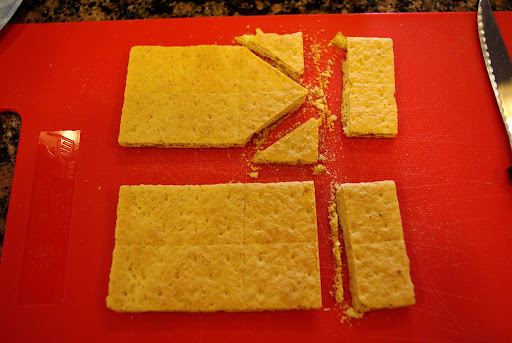 Take two of your crackers and trim off a little less than 1/4 from one of the short edges. Use a serrated knife and light pressure. You might break a few while you’re getting used to the feeling of cutting, but it’s par for the course. After you trim the ends, cut your angles – use the center of the cracker (both horizontally and vertically) as your guidelines. At this point you can also trim about 3/4″ off of the two large crackers that you are going to use for your roof (as show in the first photo), but I skipped it this time and didn’t feel like it made too much of an aesthetic difference.
Now, you’ll want to whip up a batch of royal icing: You’ll need 3 cups of powdered sugar, 2 eggs whites and 1/4 tsp of Cream of Tartar. Whip the egg whites until frothy, then add the other ingredients and whip for about 7-9 minutes until the volume has increased and it holds stiff peaks. Put your icing into a piping bag. 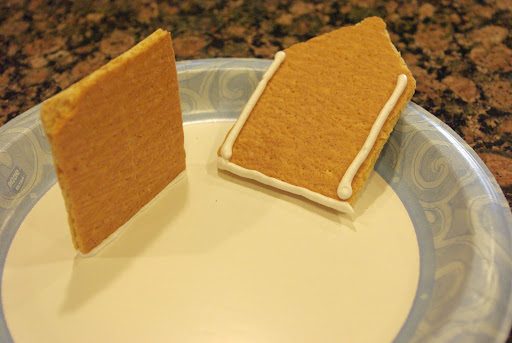 I start by adhering one of the side pieces (a 1/2 sheet of graham cracker) directly onto the plate with royal icing. Next I attach the end piece, the other side piece, and then the remaining end piece. You’ll want to work fast as the royal icing sets up very quickly. 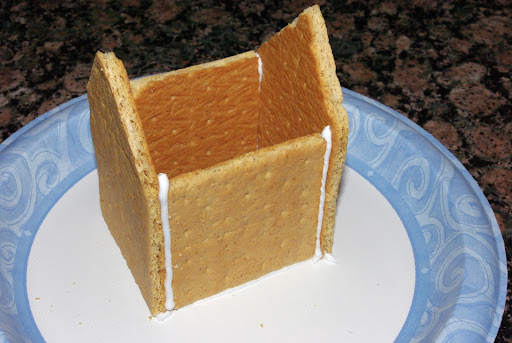 I make sure that each piece is securely “glued” on to the plate, because I find that it makes it a lot easier for the kids to decorate their houses when they can lift up their plates and tip it around without worrying that it will fall apart or knock over. 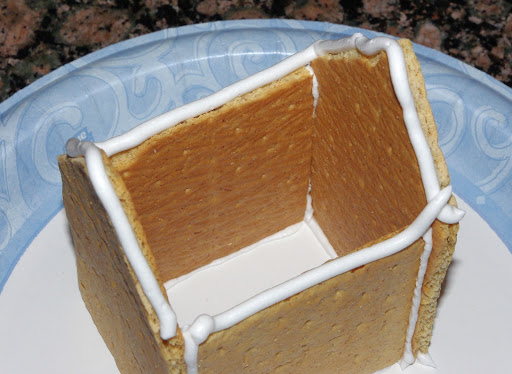 Add a line of icing all around – your roof pieces probably won’t touch all of these places, but it looks nicer when it’s all finished 🙂 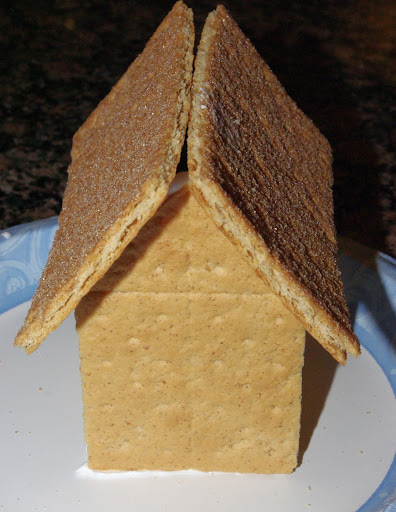 Add your two angled roof pieces – remember when I said that cheap graham crackers don’t look as nice?! My boys wanted cinnamon crackers for the roof, and man, they were extra bowed and curved! 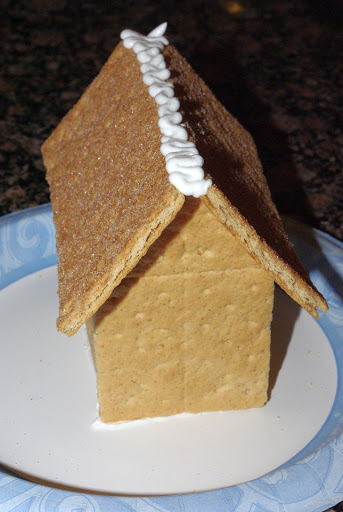 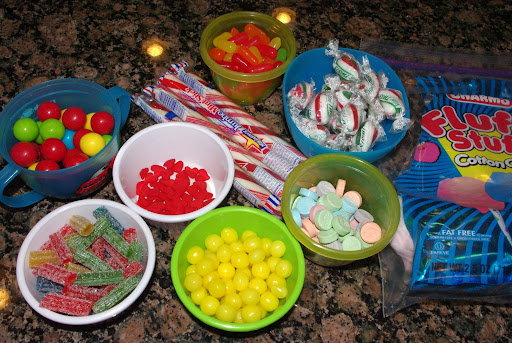 Set out all the candy for decorating. Last year we used healthier options like pretzels, raisins, and yogurt bits, but this year we went all out with the junk food! 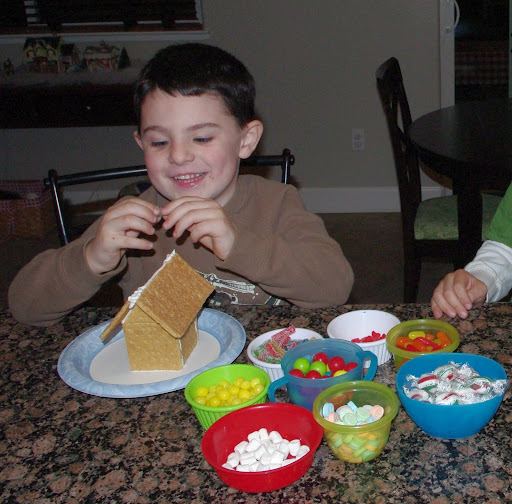 Get to work! Since the icing sets up so quickly I like to pipe a few lines on one side of the house and let my boys decorate one area at a time so that we can ensure that the candy all stays glued down well. 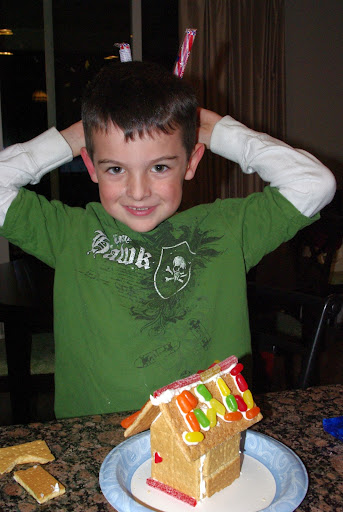 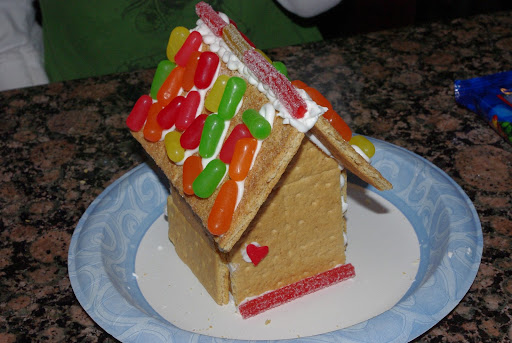 Ready for display…or, to eat. Sawyer was pretty impressed with his decision to use the leftover graham cracker bits on the side of his house. Personally, I’m lovin’ his heart doorknob. 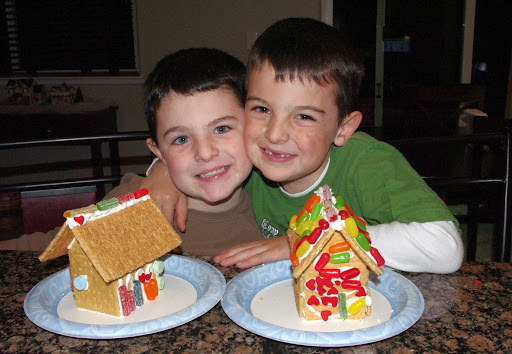