Looking for book suggestions on what to read? These 10 fast-paced fiction novels are perfect for your next binge reading session!

I’ve been reading a lot of novels this year since signing up for the Goodreads 2016 Reading Challenge in January. My goal is to read 30 books this year, and I’m already well ahead of schedule (yay!). I tend to binge read and finish entire books in a single session or two, and since I know that many of you are just like me, I wanted to share some of my favorite binge-worthy books that I’ve read so far this year. 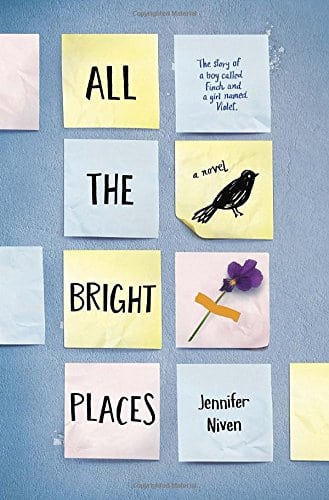 All the Bright Places by Jennifer Niven

From Goodreads.com: “When Finch and Violet meet on the ledge of the bell tower at school, it’s unclear who saves whom. And when they pair up on a project to discover the “natural wonders” of their state, both Finch and Violet make more important discoveries: It’s only with Violet that Finch can be himself—a weird, funny, live-out-loud guy who’s not such a freak after all. And it’s only with Finch that Violet can forget to count away the days and start living them. But as Violet’s world grows, Finch’s begins to shrink.”

My notes: I tend to gravitate towards angst-ridden and depressing young adult fiction quite frequently, and All the Bright Places is one of my favorite YA novels that I’ve read in awhile. I empathized with the characters and their struggles, yet the story felt hopeful despite the heavy topics of depression and suicide.

The Wayward Pines Series by Blake Crouch: Pines, Wayward, and The Last Town

From Goodreads.com: “Secret service agent Ethan Burke arrives in Wayward Pines, Idaho, with a clear mission: locate and recover two federal agents who went missing in the bucolic town one month earlier. But within minutes of his arrival, Ethan is involved in a violent accident. He comes to in a hospital, with no ID, no cell phone, and no briefcase. The medical staff seems friendly enough, but something feels…off. As the days pass, Ethan’s investigation into the disappearance of his colleagues turns up more questions than answers. Why can’t he get any phone calls through to his wife and son in the outside world? Why doesn’t anyone believe he is who he says he is? And what is the purpose of the electrified fences surrounding the town? Are they meant to keep the residents in? Or something else out? Each step closer to the truth takes Ethan further from the world he thought he knew, from the man he thought he was, until he must face a horrifying fact—he may never get out of Wayward Pines alive.” (Pines)

The story only gets better from there as it moves quickly through the fast-paced second and third novels, Wayward and The Last Town!

My Notes: This series managed to suck me in despite the fact that I had already watched the Wayward Pines miniseries on television last summer. Usually if I’ve seen the movie but haven’t read the book, I won’t read it. The Wayward Pines books are profoundly and significantly different from the television series, and I found them to be far superior and more entertaining. 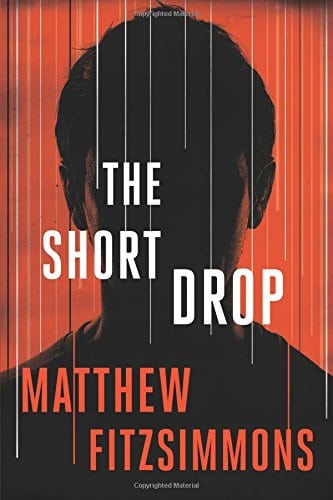 The Short Drop by Matthew Fitzsimmons

From Goodreads.com: “A decade ago, fourteen-year-old Suzanne Lombard, the daughter of Benjamin Lombard—then a senator, now a powerful vice president running for the presidency—disappeared in the most sensational missing-person case in the nation’s history. Still unsolved, the mystery remains a national obsession.

For legendary hacker and marine Gibson Vaughn, the case is personal—Suzanne Lombard had been like a sister to him. On the tenth anniversary of her disappearance, the former head of Benjamin Lombard’s security asks for Gibson’s help in a covert investigation of the case, with new evidence in hand.

Haunted by tragic memories, he jumps at the chance to uncover what happened all those years ago. Using his military and technical prowess, he soon discovers multiple conspiracies surrounding the Lombard family—and he encounters powerful, ruthless political players who will do anything to silence him and his team. With new information surfacing that could threaten Lombard’s bid for the presidency, Gibson must stay one step ahead as he navigates a dangerous web to get to the truth.”

My Notes: This book is fast paced and intriguing with enough twists and turns to keep things interesting. The characters in The Short Drop were well developed, and the attention that Fitzsimmons gave to describing the childhood bond between Gibson and Suzanne was very well done. 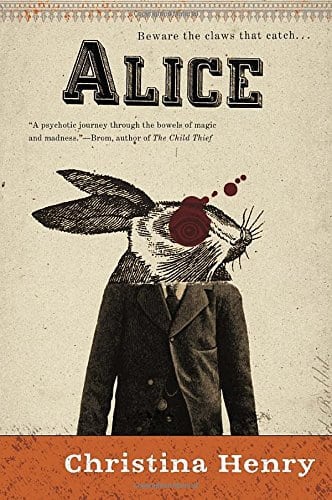 From Goodreads.com: “In a warren of crumbling buildings and desperate people called the Old City, there stands a hospital with cinderblock walls which echo the screams of the poor souls inside. In the hospital, there is a woman. Her hair, once blond, hangs in tangles down her back. She doesn’t remember why she’s in such a terrible place. Just a tea party long ago, and long ears, and blood…

Then, one night, a fire at the hospital gives the woman a chance to escape, tumbling out of the hole that imprisoned her, leaving her free to uncover the truth about what happened to her all those years ago. Only something else has escaped with her. Something dark. Something powerful. And to find the truth, she will have to track this beast to the very heart of the Old City, where the rabbit waits for his Alice.”

My Notes: Fair warning, this book contains a lot of disturbing sexual violence. A LOT. 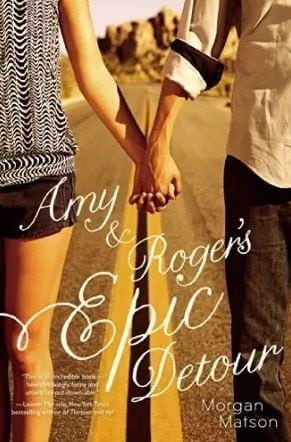 From Goodreads.com: “Amy Curry is not looking forward to her summer. Her mother decided to move across the country and now it’s Amy’s responsibility to get their car from California to Connecticut. The only problem is, since her father died in a car accident, she isn’t ready to get behind the wheel. Enter Roger. An old family friend, he also has to make the cross-country trip – and has plenty of baggage of his own. The road home may be unfamiliar – especially with their friendship venturing into uncharted territory – but together, Amy and Roger will figure out how to map their way.”

My Notes: After reading through all of the heavy violence in the aforementioned Alice, I was ready for something lighthearted, and Amy & Roger’s Epic Detour was just what I needed. It was somewhat predictable, but it was definitely a cute road trip story that’s worth a read. 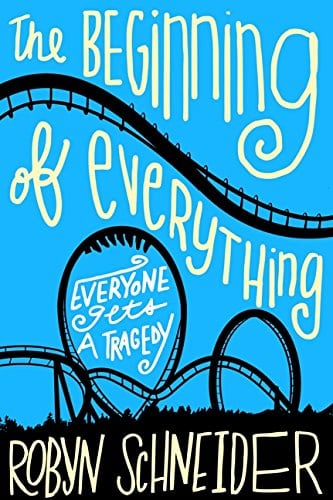 The Beginning of Everything by Robyn Schneider

From Goodreads.com: “Golden boy Ezra Faulkner believes everyone has a tragedy waiting for them—a single encounter after which everything that really matters will happen. His particular tragedy waited until he was primed to lose it all: in one spectacular night, a reckless driver shatters Ezra’s knee, his athletic career, and his social life.

No longer a front-runner for Homecoming King, Ezra finds himself at the table of misfits, where he encounters new girl Cassidy Thorpe. Cassidy is unlike anyone Ezra’s ever met, achingly effortless, fiercely intelligent, and determined to bring Ezra along on her endless adventures. But as Ezra dives into his new studies, new friendships, and new love, he learns that some people, like books, are easy to misread.”

My Notes: A quick and easy YA read, The Beginning of Everything is another coming-of-age story about love and tragedy that was rather predictable and cliche, but still enjoyable. 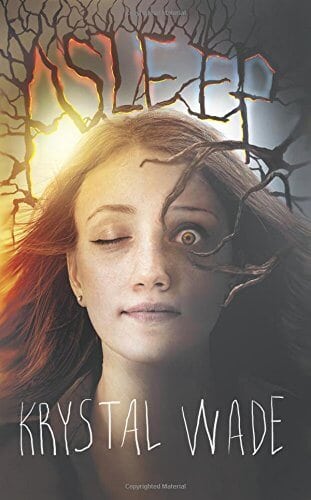 From Goodreads.com: “‘To cure fear, you must use fear.’ Rose Briar claims no responsibility for the act that led to her imprisonment in an asylum. She wants to escape, until terrifying nightmares make her question her sanity and reach out to her doctor. He’s understanding and caring in ways her parents never have been, but as her walls tumble down and Rose admits fault, a fellow patient warns her to stop the medications. Phillip believes the doctor is evil and they’ll never make it out of the facility alive. Trusting him might be just the thing to save her. Or it might prove the asylum is exactly where she needs to be.”

My Notes: I downloaded this book for free on a whim as part of my Kindle Unlimited subscription, and I started reading it not knowing much about what I was getting myself in to. Asleep is a modern retelling of Sleeping Beauty, but aside from the main characters’ names, there’s not much similarity to the classic tale. The story focuses on the uncertainty of Rose’s sanity, which led me to question each character’s motives and the reality of every situation until the very last page. 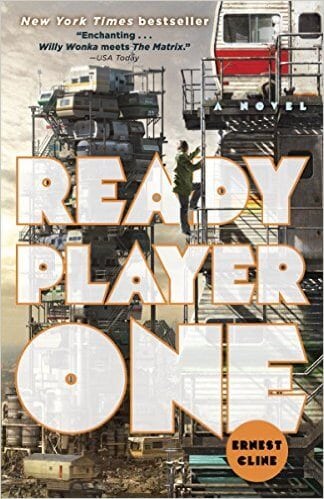 Ready Player One by Ernest Cline

From Goodreads.com: “In the year 2044, reality is an ugly place. The only time teenage Wade Watts really feels alive is when he’s jacked into the virtual utopia known as the OASIS. Wade’s devoted his life to studying the puzzles hidden within this world’s digital confines, puzzles that are based on their creator’s obsession with the pop culture of decades past and that promise massive power and fortune to whoever can unlock them. When Wade stumbles upon the first clue, he finds himself beset by players willing to kill to take this ultimate prize. The race is on, and if Wade’s going to survive, he’ll have to win—and confront the real world he’s always been so desperate to escape.”

My Notes: I’m actually only 1/3 of the way through Ready Player One, but I’ve heard enough glowing reviews from all of my friends to know that I’m going to continue to love this story. It’s packed full of fun 80’s pop culture nostalgia and trivia facts that keep each page entertaining and engaging. I can’t wait to see where the rest of the story takes me!

What I’m Reading Next: Bird Box by Josh Malerman, Red Queen by Victoria Aveyard, and 11/22/63 by Stephen King.

What are your favorite binge worthy books? Tell me in the comments! I’d love to hear your recommendations!