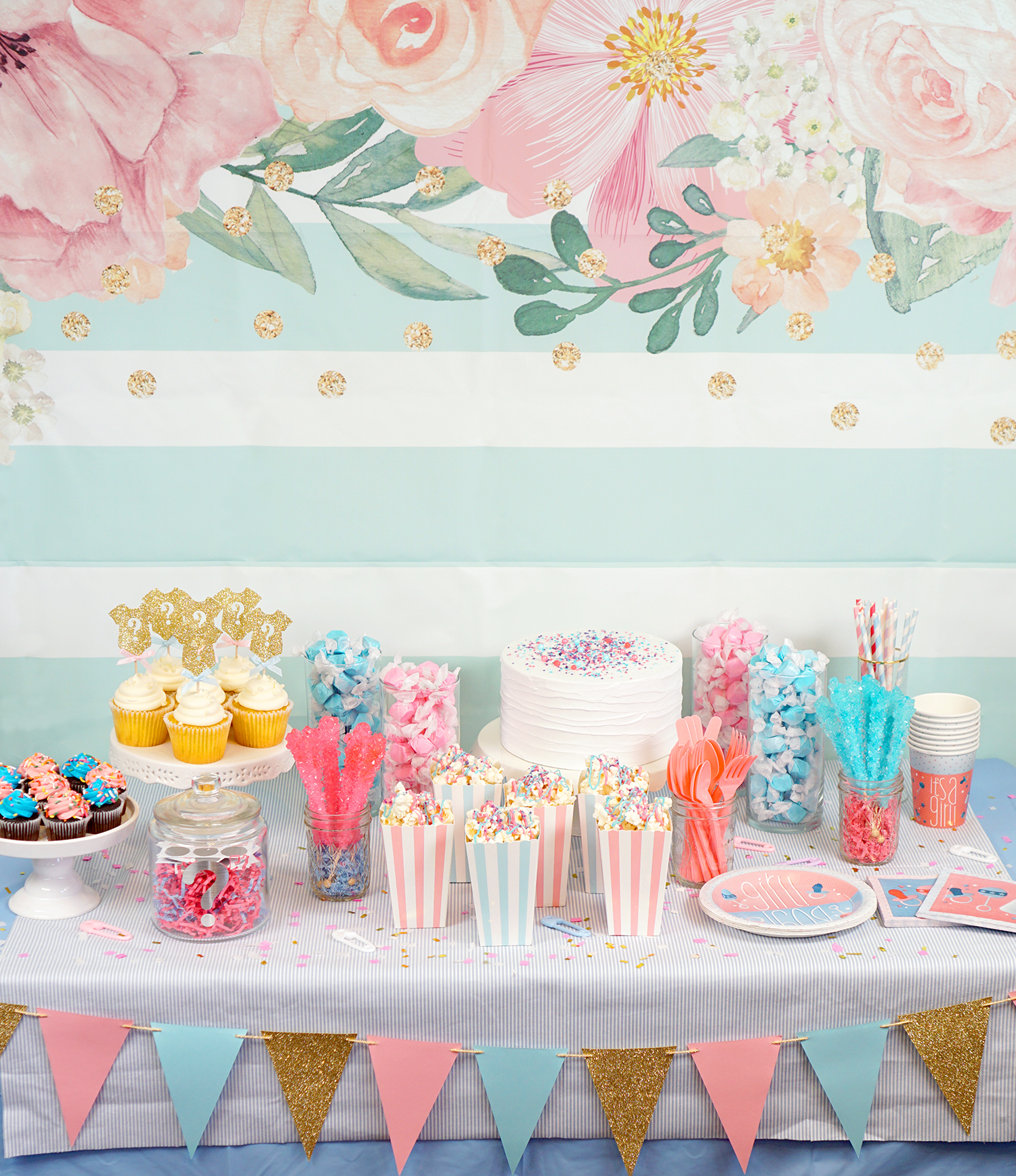 This post is sponsored by Hold the Balloon. All opinions and ideas are my own.

Gender reveal parties are all the rage these days, with parents-to-be gathering their friends and family for a celebration to announce the sex of their unborn baby. Everyone is always dying to know whether you’re having a girl or a boy, so tell them the news in style with a super fun party and a creative gender reveal announcement! 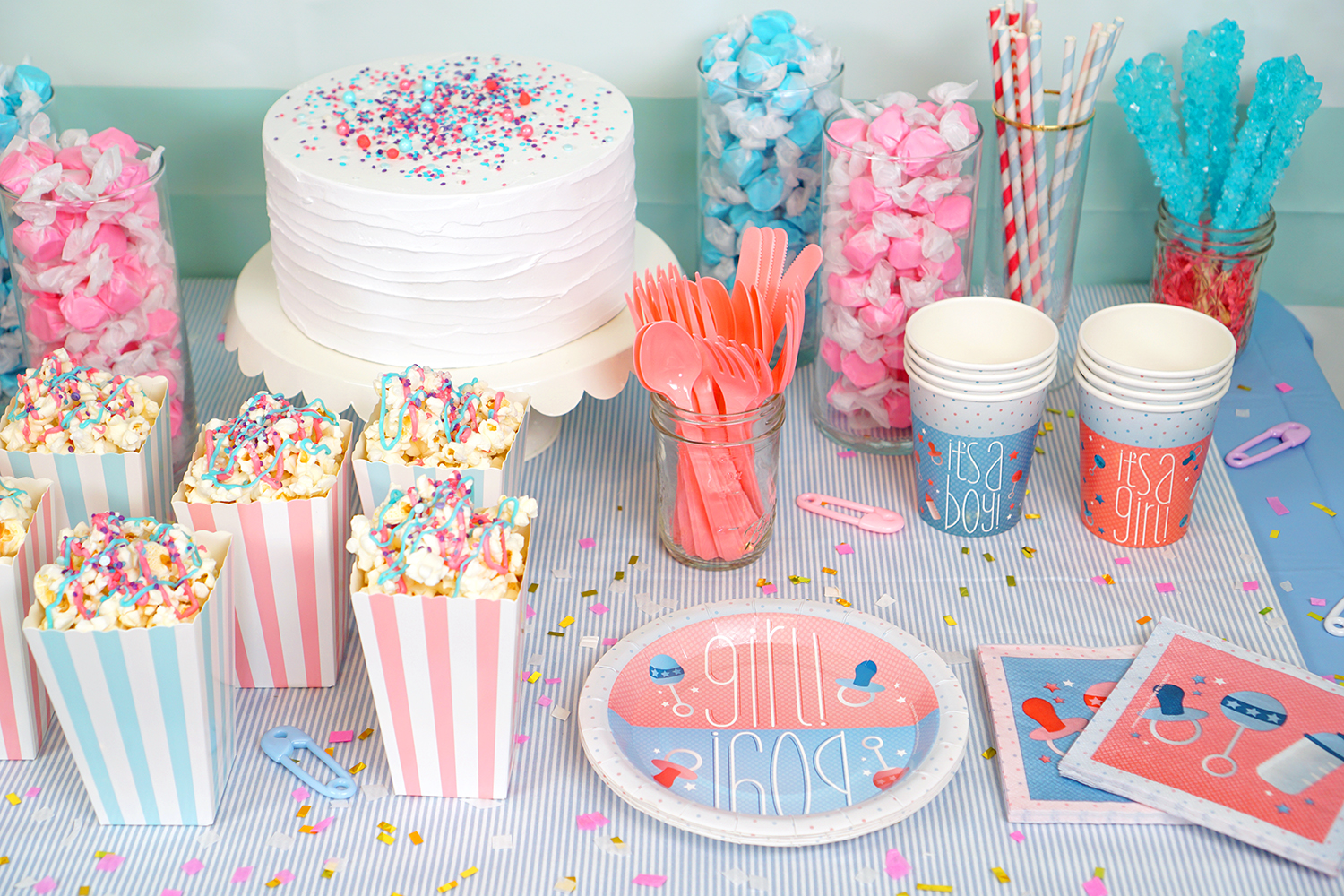 How Does a Gender Reveal Party Work?

Gender reveal parties are a relatively new invention (because everyone needs another excuse for a party, right?!), designed to bring together family and friends to announce the sex of your soon-to-be-born baby. The parents-to-be may already know the gender of the baby or, in most instances, they will discover it for the first time at the party, too. Gender reveal parties are generally a casual affair for close family and friends, however, on occasion, a gender reveal party may be a fancier and more elaborate celebration with a large number of guests. 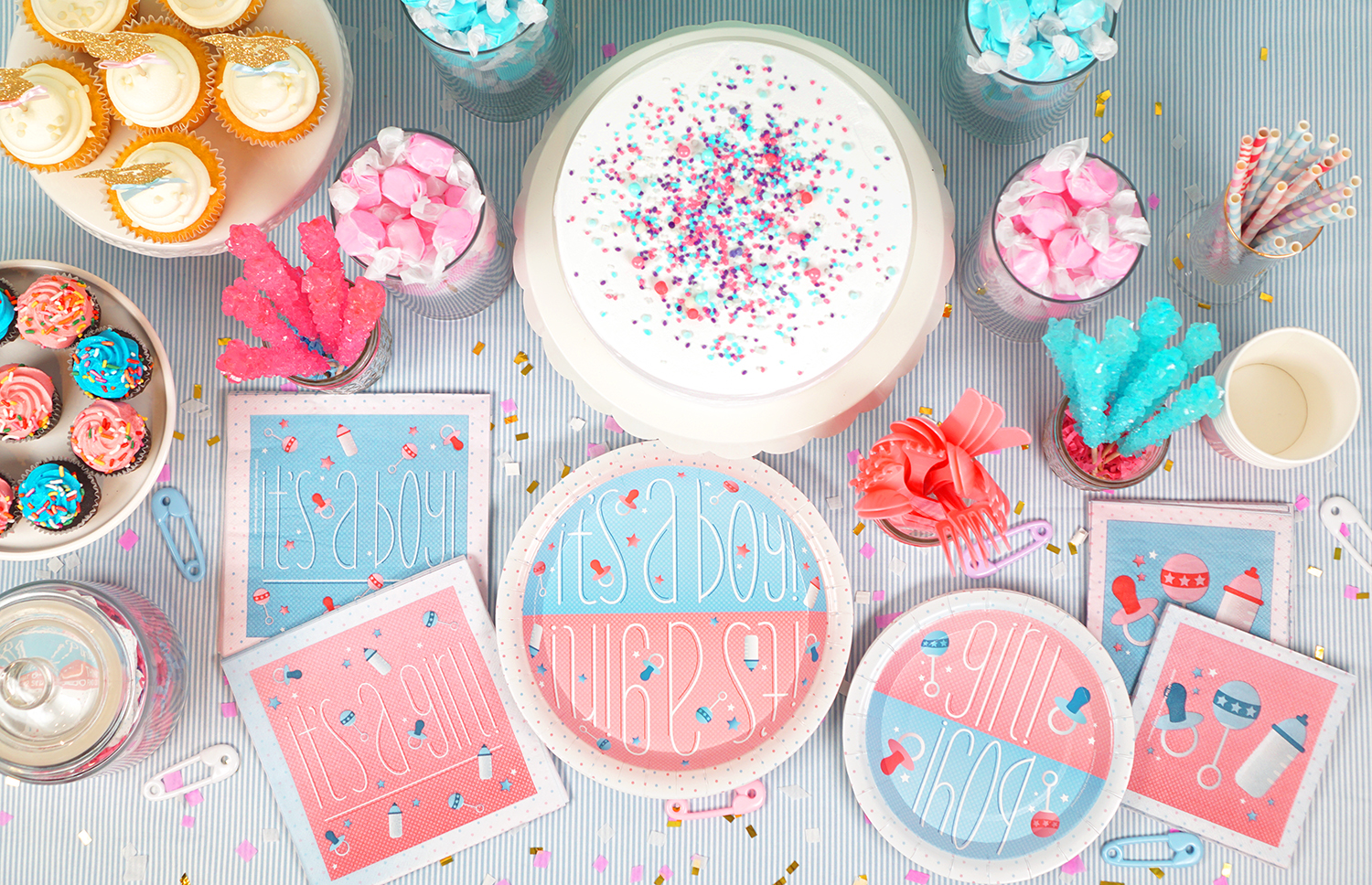 Gender reveal parties are most often decorated in a blue and pink color palette, and these Sweet Surprise party goods from Hold the Balloon fit the bill perfectly! The napkins are double-sided to show off both “It’s a Boy!” and “It’s a Girl!” and I love the half-and-half plates! 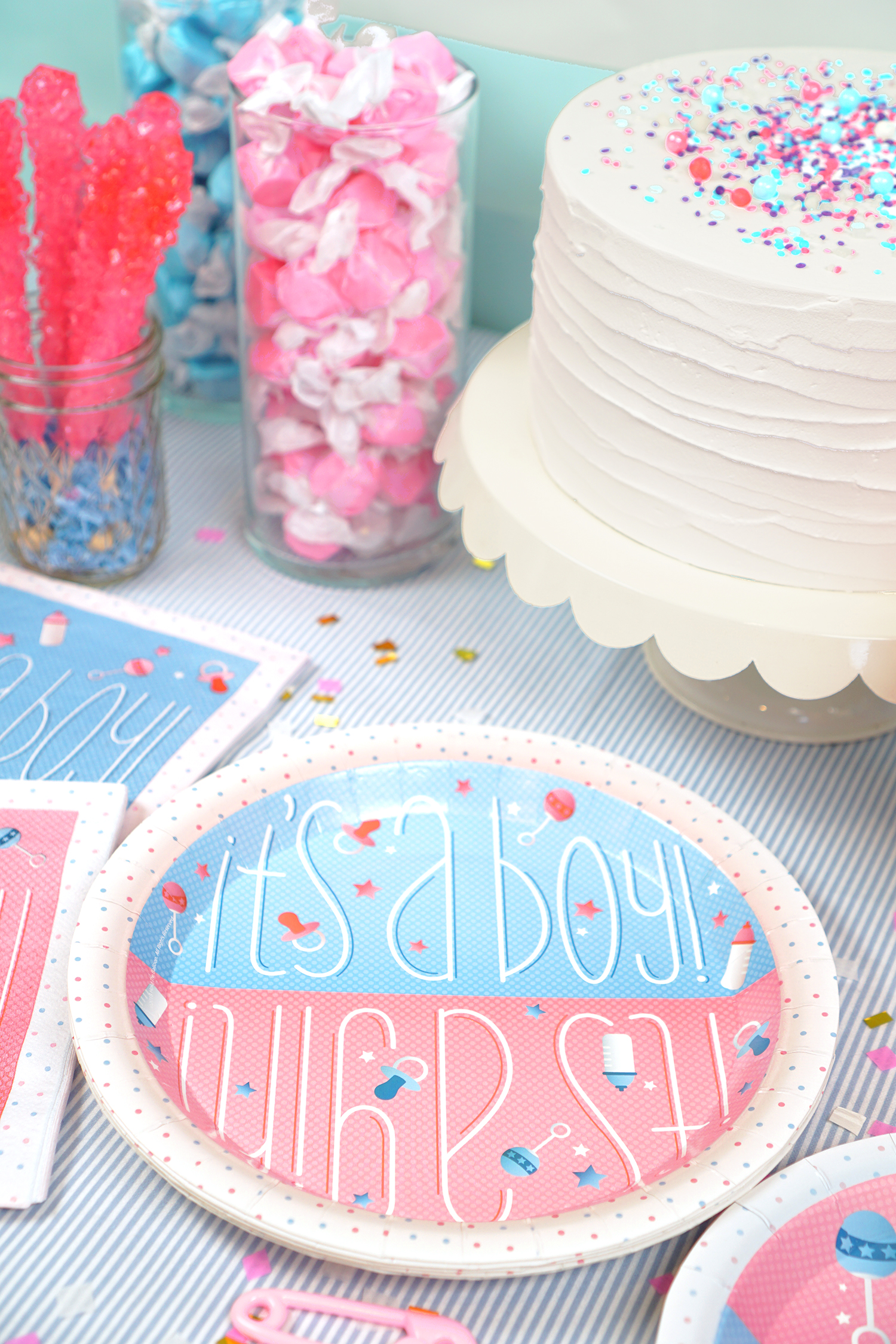 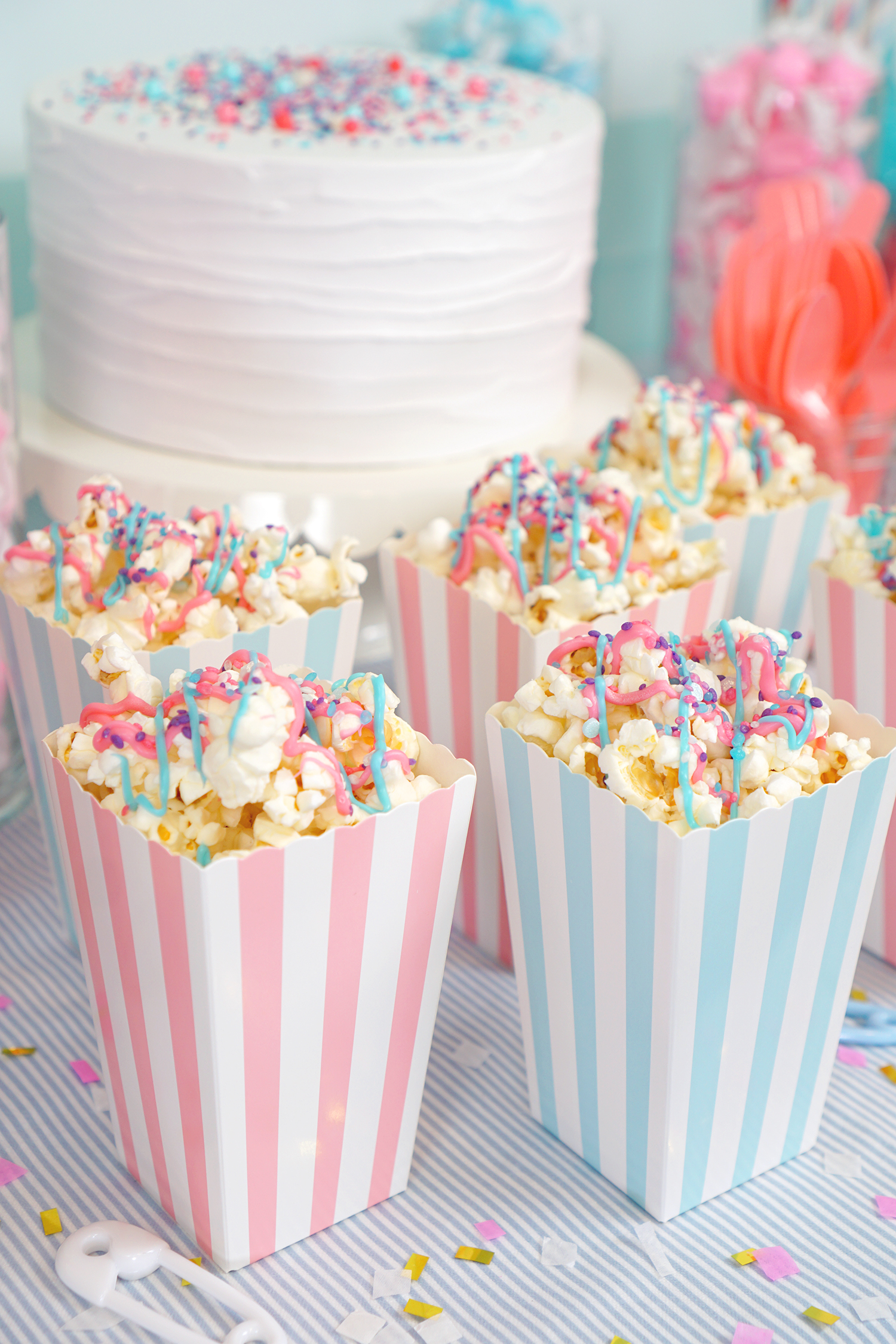 When Should You Have a Gender Reveal Party?

Parents-to-be are usually able to determine the sex of their baby via ultrasound around 17-20 weeks into the pregnancy, and a gender reveal party will often happen soon after, though it’s possible to wait until closer to the baby’s birth to do the reveal if desired. 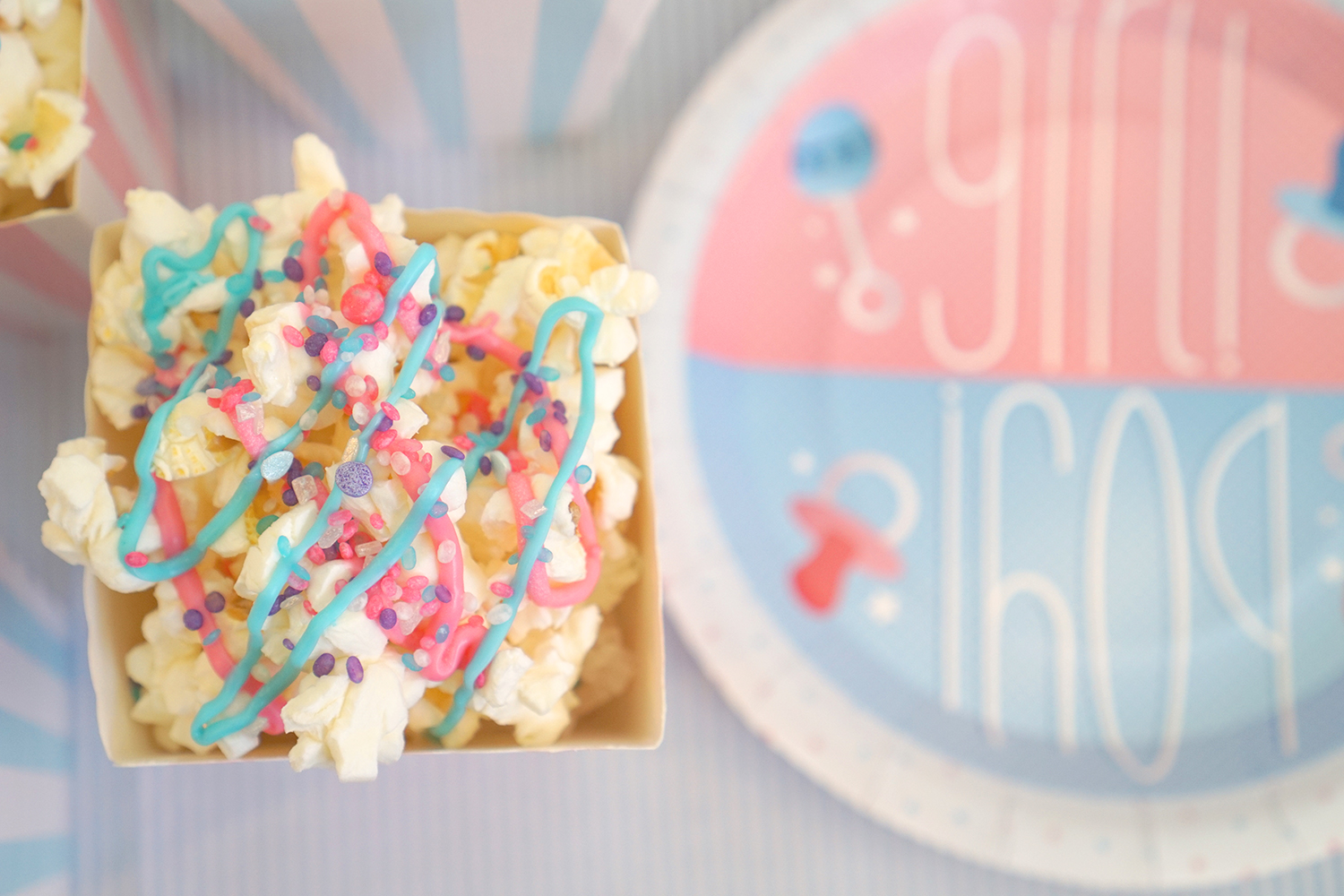 If the parents-to-be want to learn their baby’s gender at the party along with the guests, they might ask the doctor to write the information down and place it in an envelope. The envelope is then passed off to a trusted friend or family member who will help design and orchestrate the big reveal. 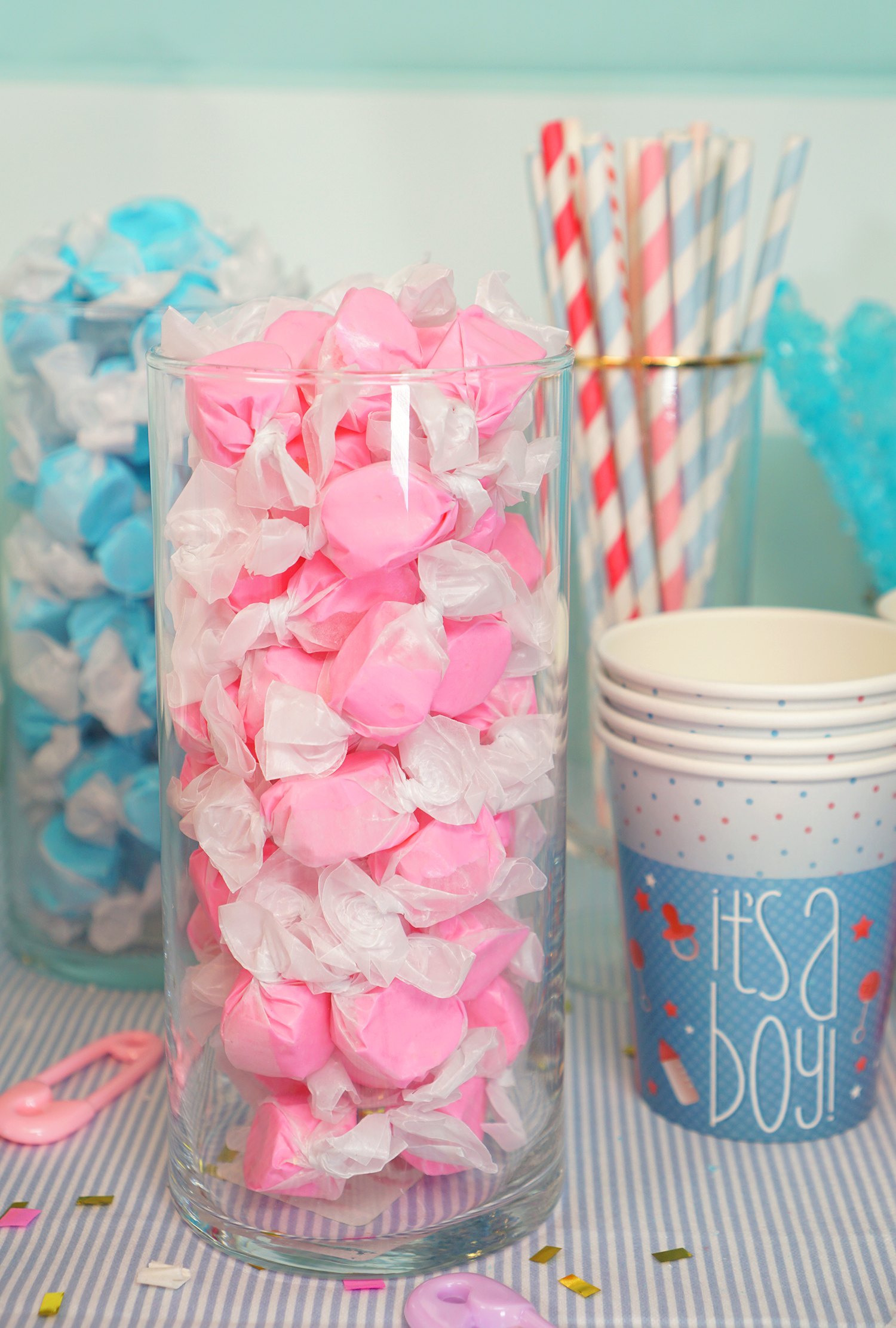 What Kind of Foods are Served at a Gender Reveal Party?

Gender reveal hosts often serve a buffet of desserts and/or snacks, but you can serve a full meal if you desire! It’s totally up to you! Whatever you decide to serve, make the most of the pink and blue theme with colorful candy, snacks, and beverages. 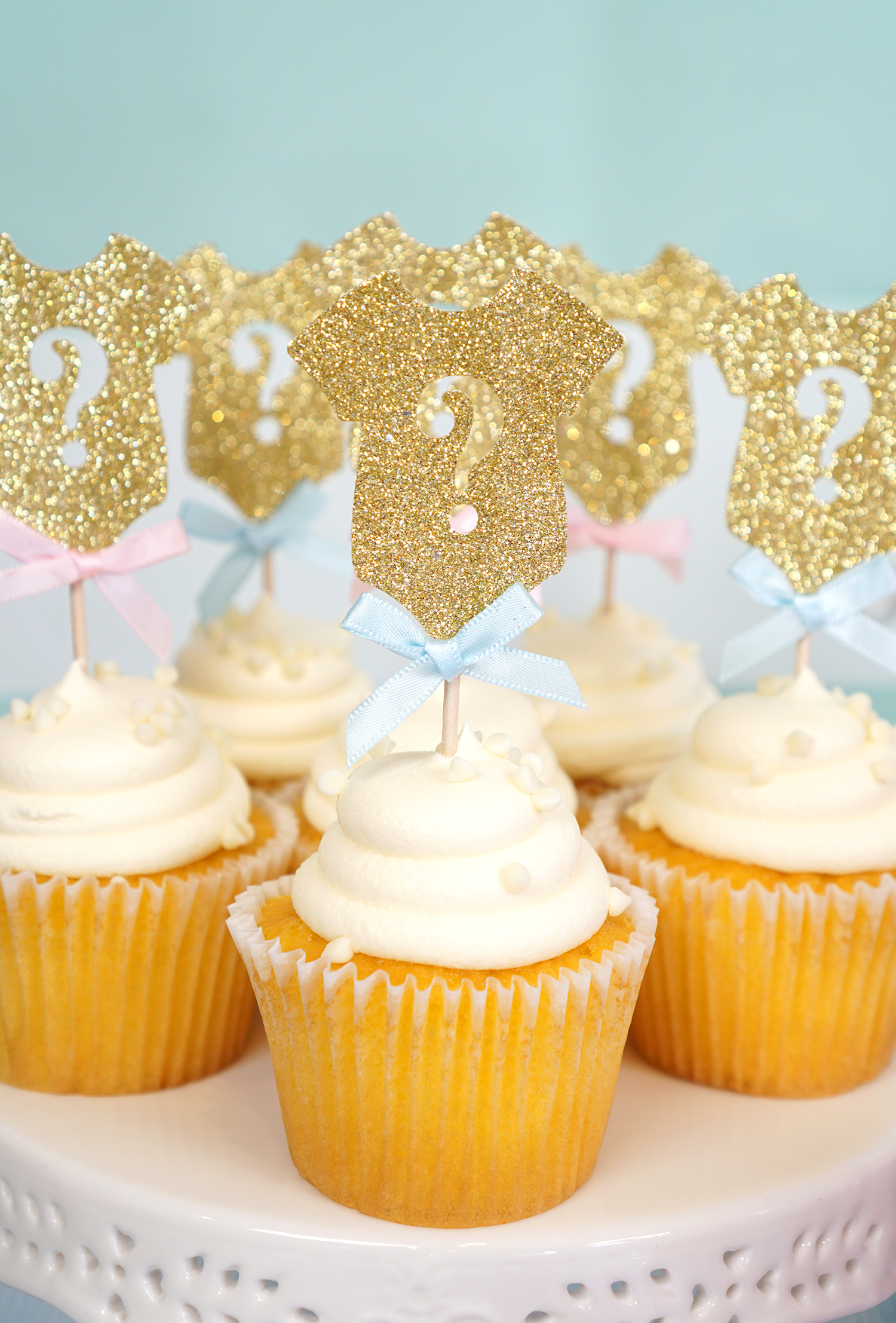 I love simple white cupcakes with sparkly toppers and a touch of pink and blue! 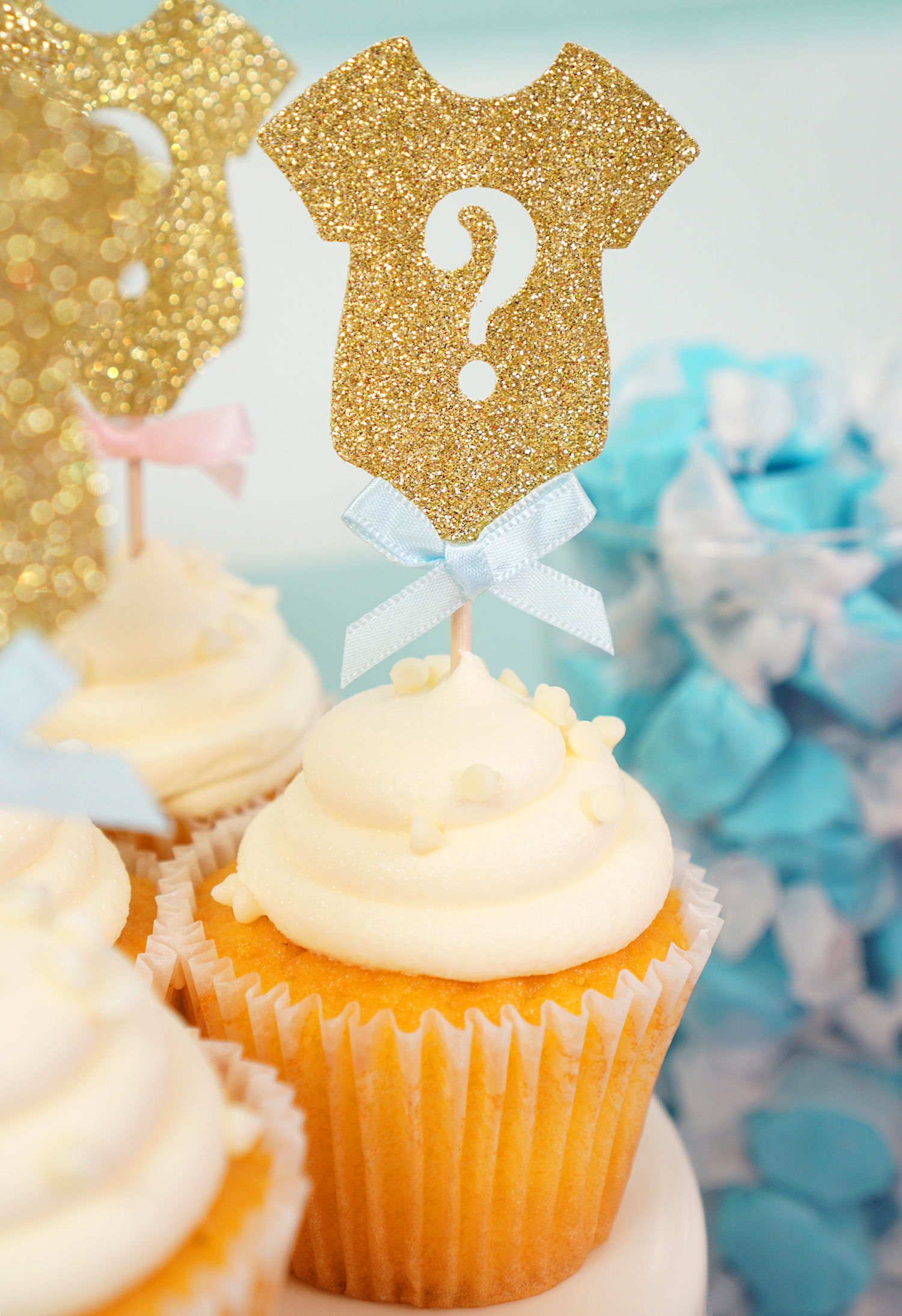 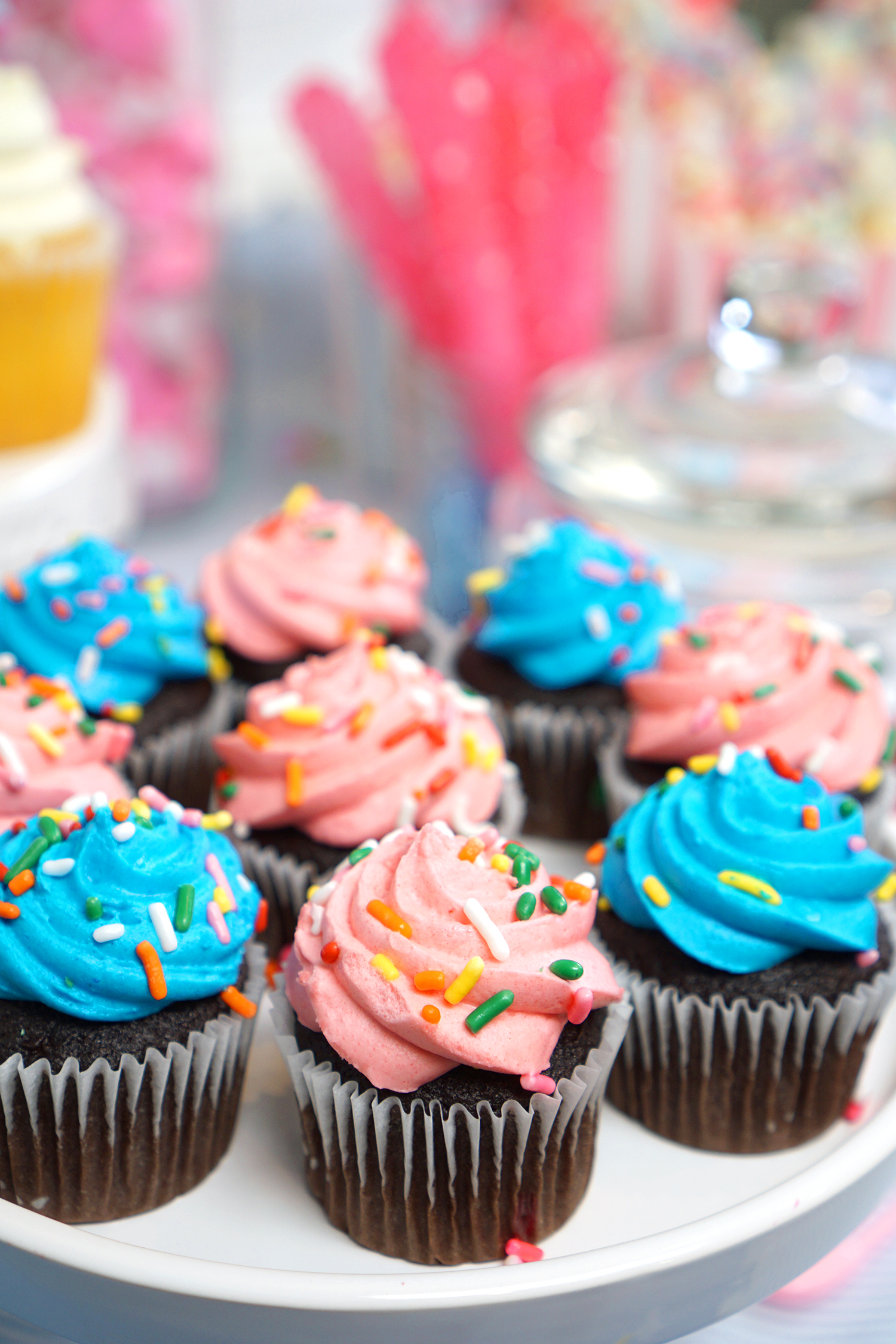 Of course, you could also use pink and blue frosted cupcakes to stick with the colorful theme! 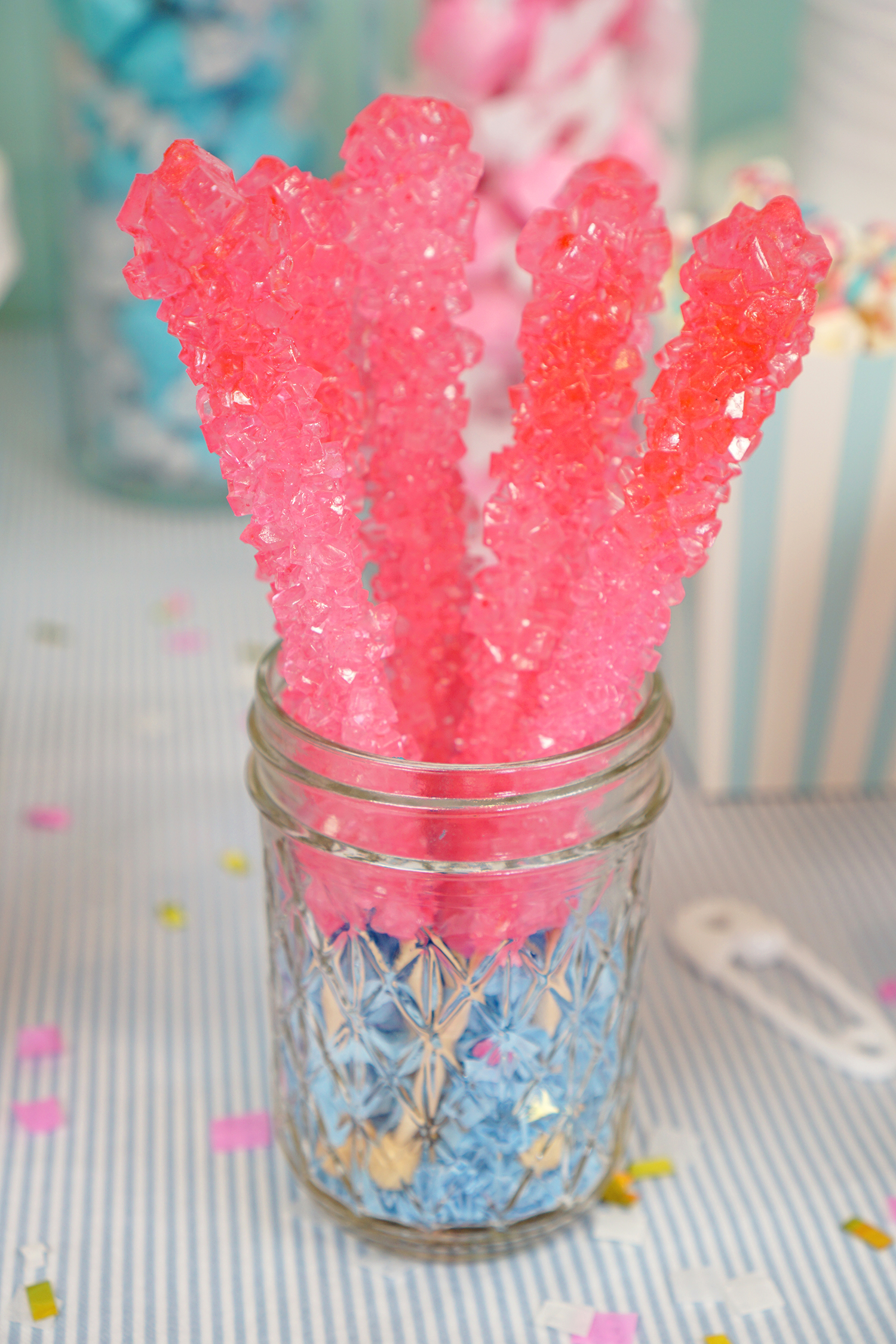 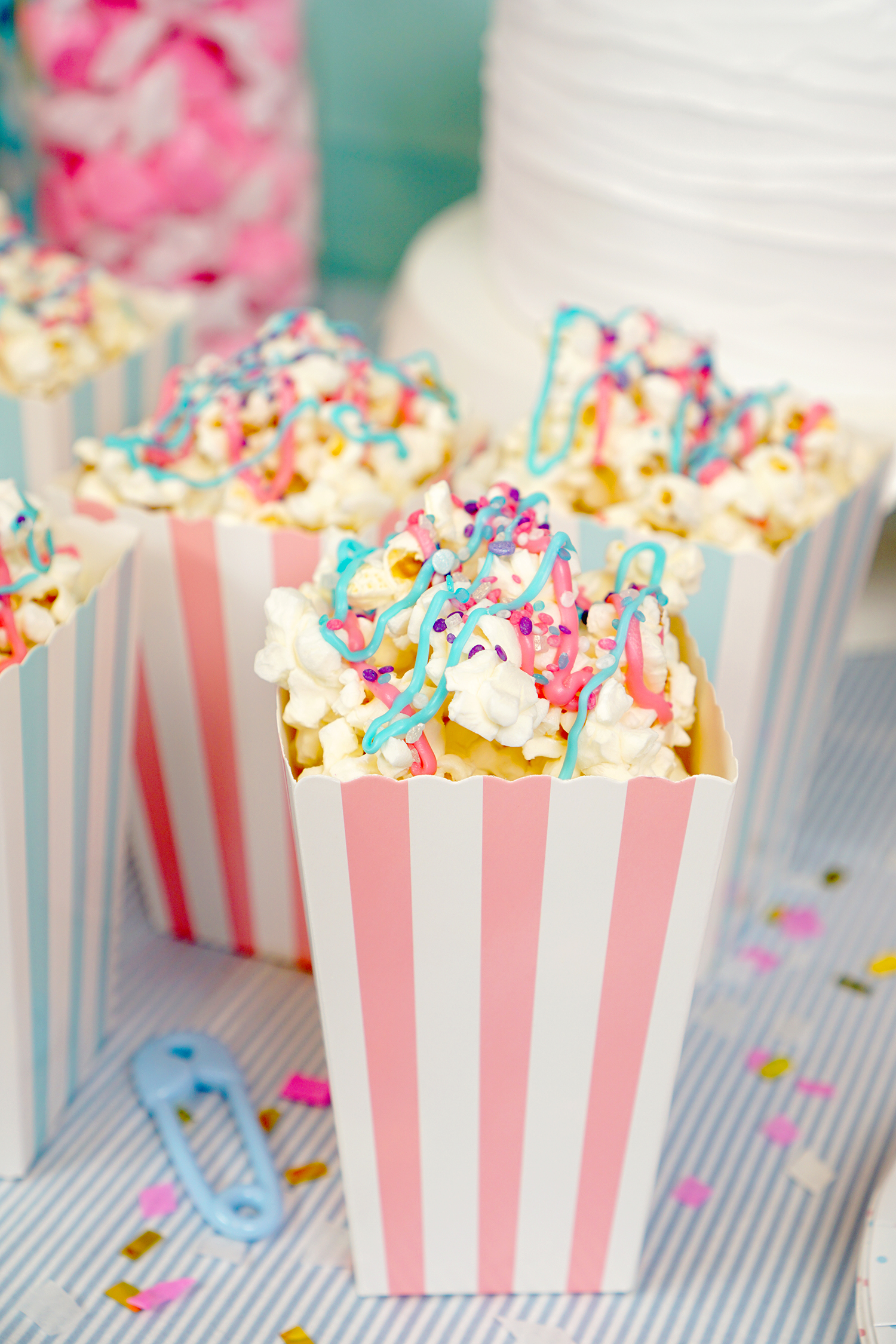 A drizzle of melted candy and a dash of sprinkles adds a fun pop of color to this party snack! 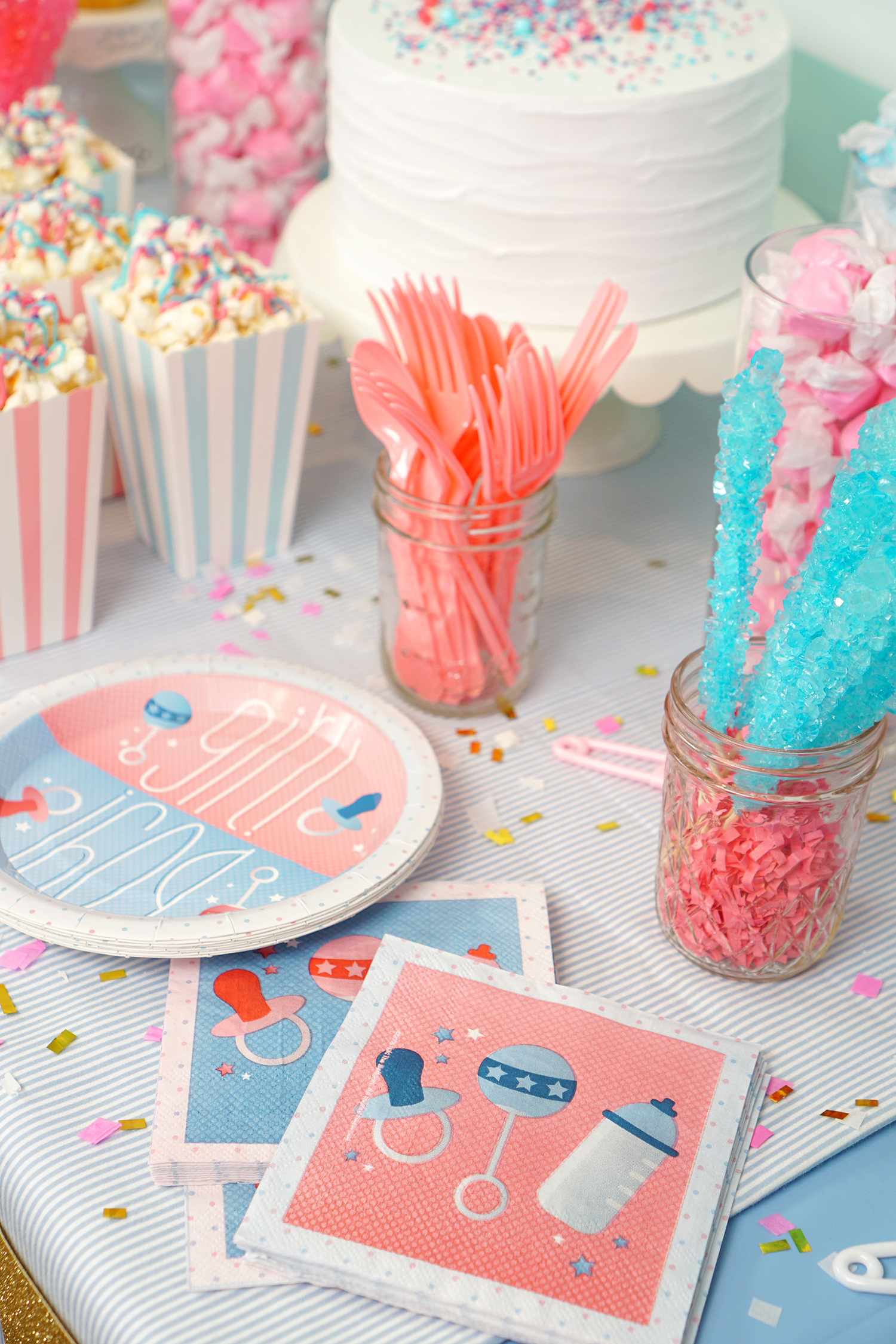 What Party Supplies Do You Need for a Gender Reveal Party?

Depending on the type of foods that are being served, you’ll want to have plates and napkins available in various sizes along with cups, plastic cutlery, and straws. For the table, a simple plain-colored plastic tablecloth works well, and you can top it with a fabric runner to add pattern and dimension if desired. I used the Sweet Surprise line of party goods from Hold the Balloon for this gender reveal party, and they were a huge hit! 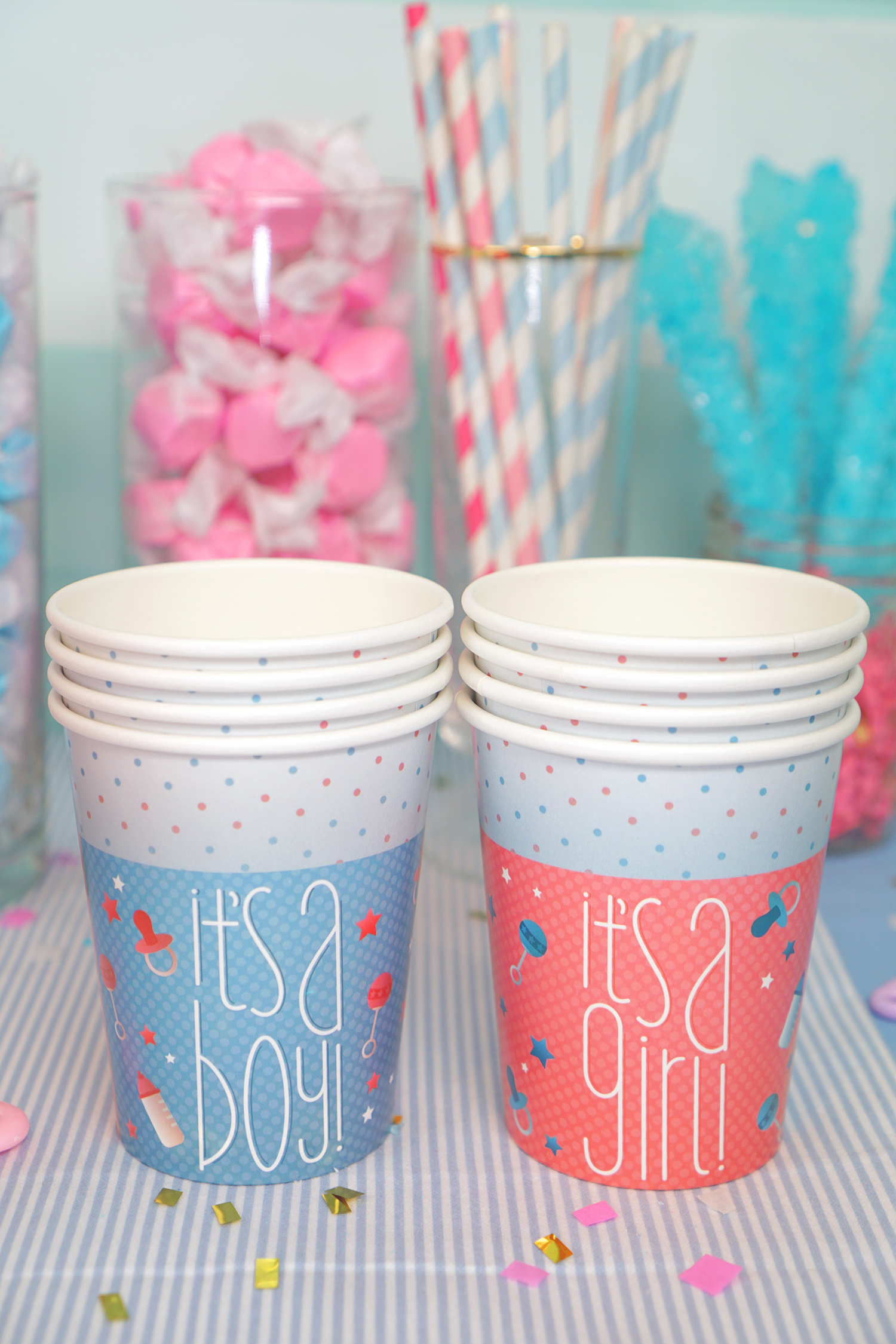 Like the napkins, these fun party cups from Hold the Balloon are also double-sided, and guests can cast their vote as to whether they think the couple is having a girl or a boy by displaying the appropriate side of the cup. 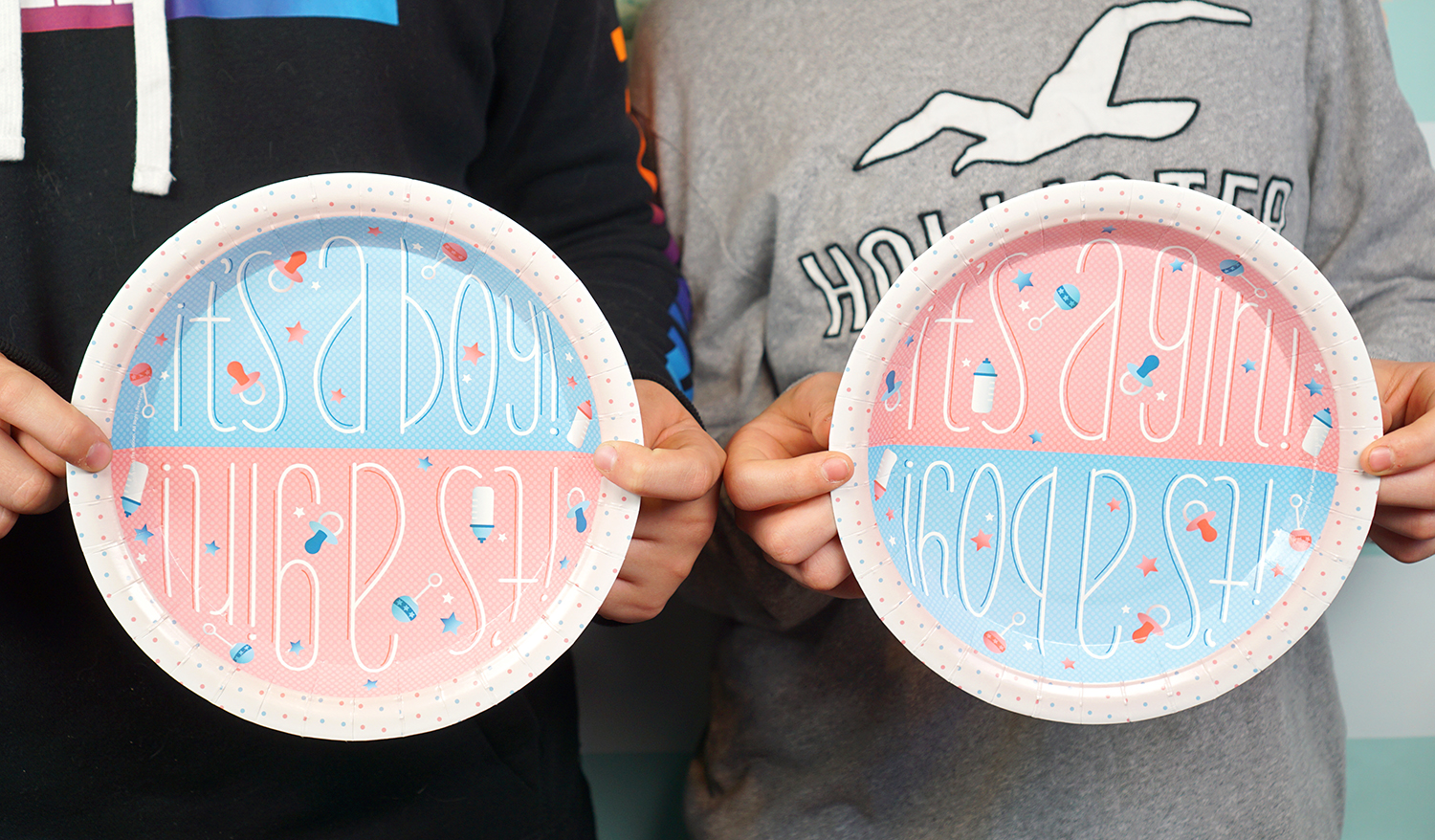 Another fun way to cast your vote is with the plates! Have each party guest hold up their vote before the big reveal! 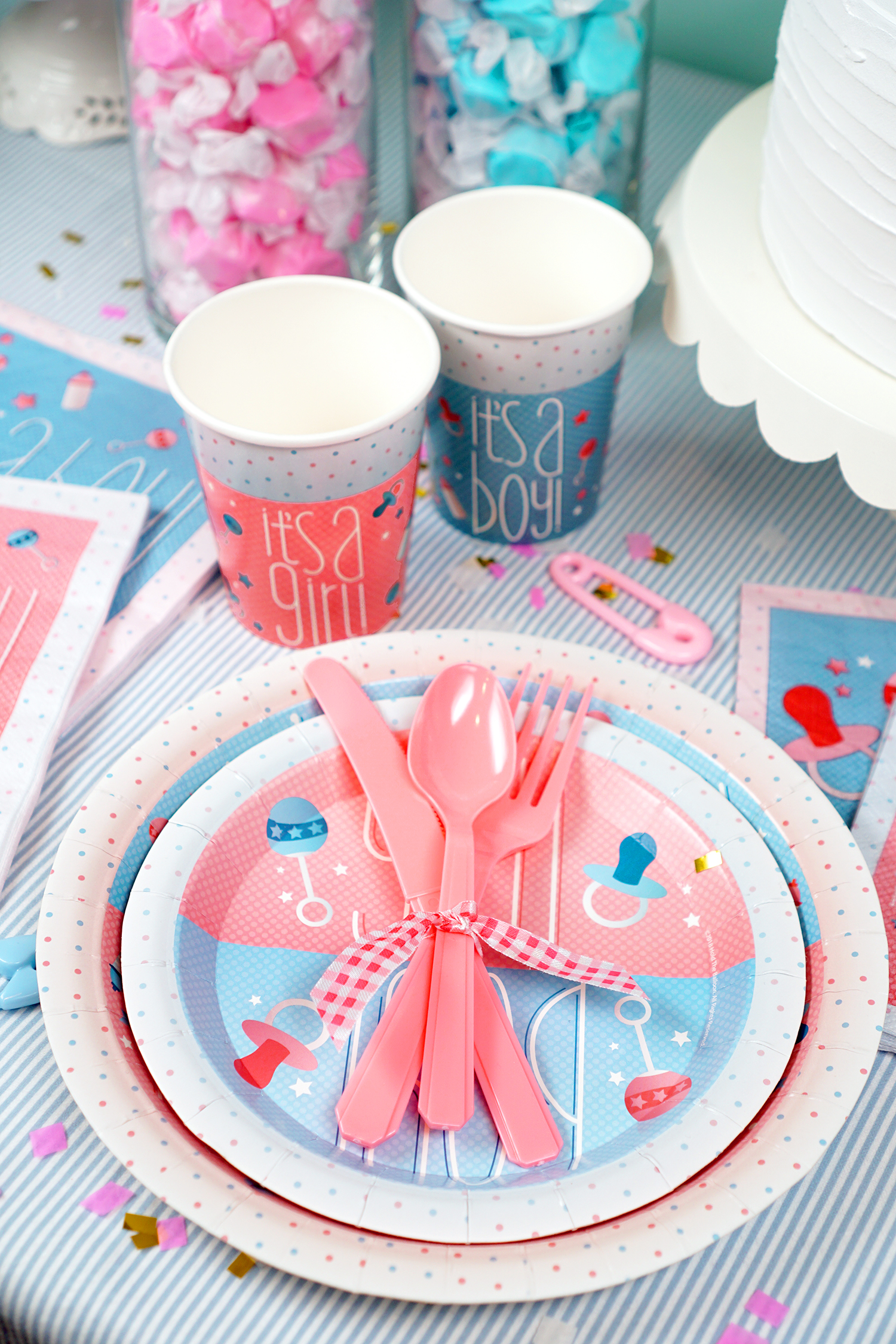 If you’re planning on having a sit down affair, dress up each place setting with layered party supplies topped off with a pretty ribbon. Easy peasy and super cute! 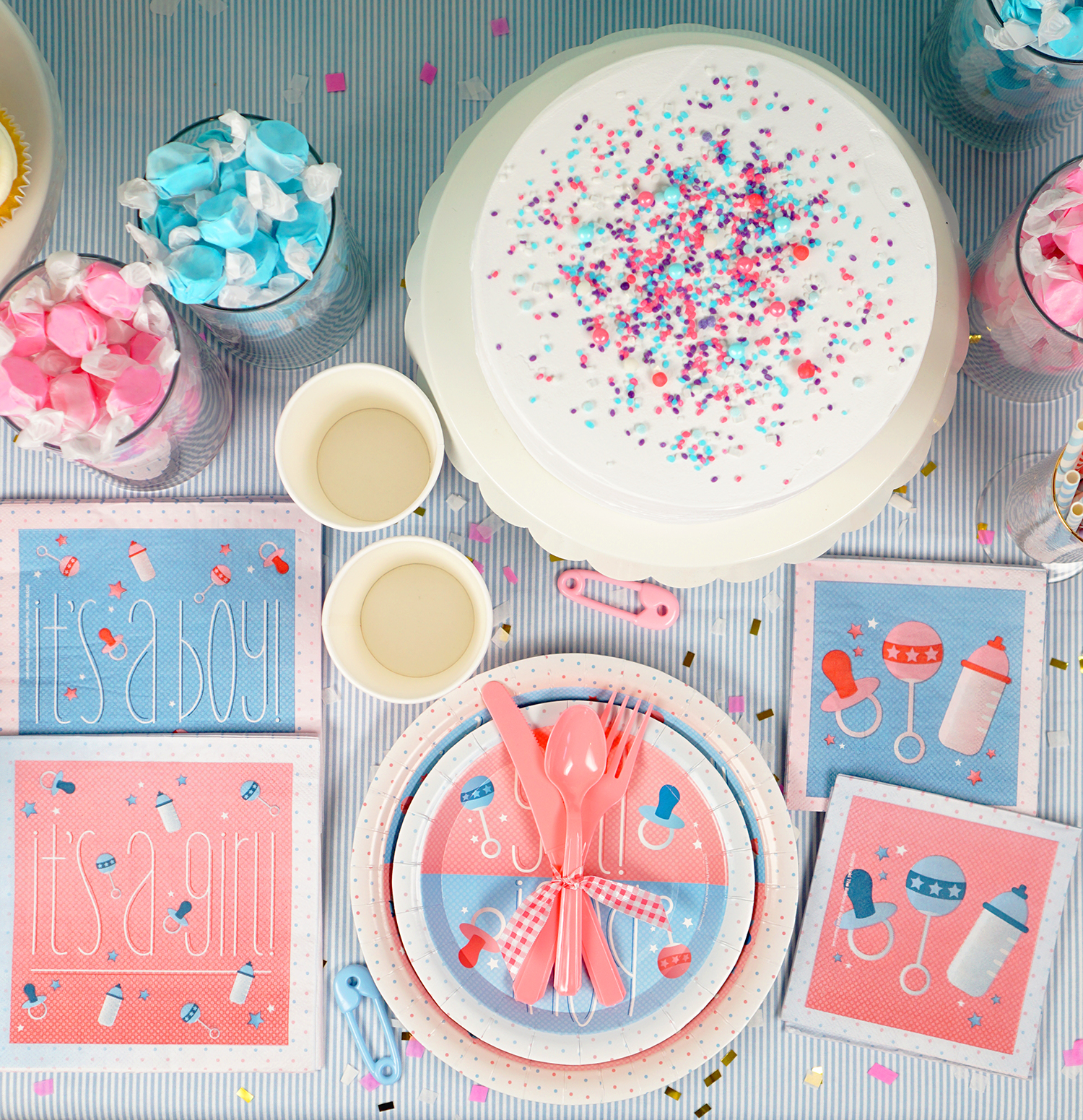 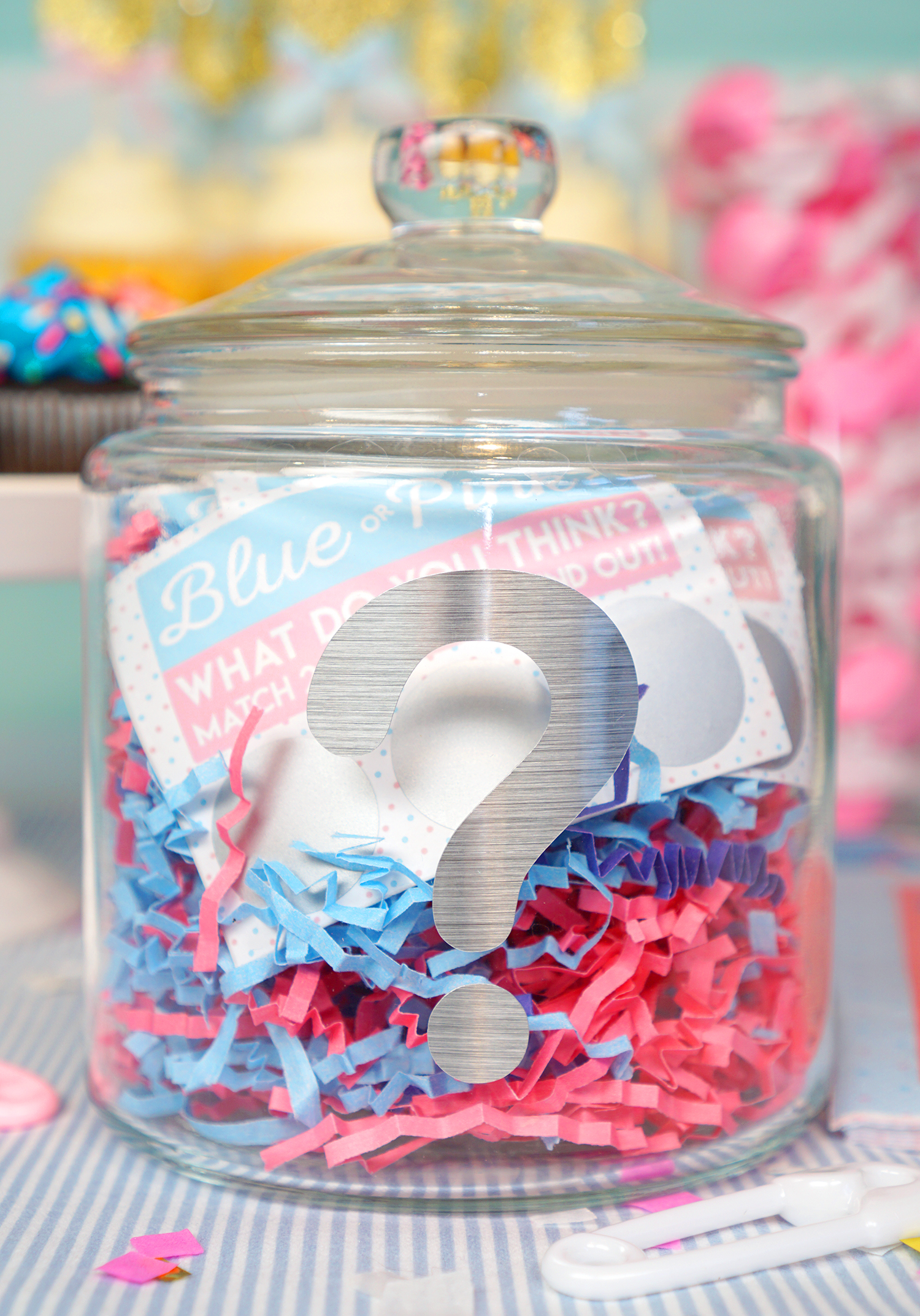 How is the Gender Reveal Done?

This is the part where you get to be creative! There are SO many fun ways in which the parents-to-be can reveal the gender including: 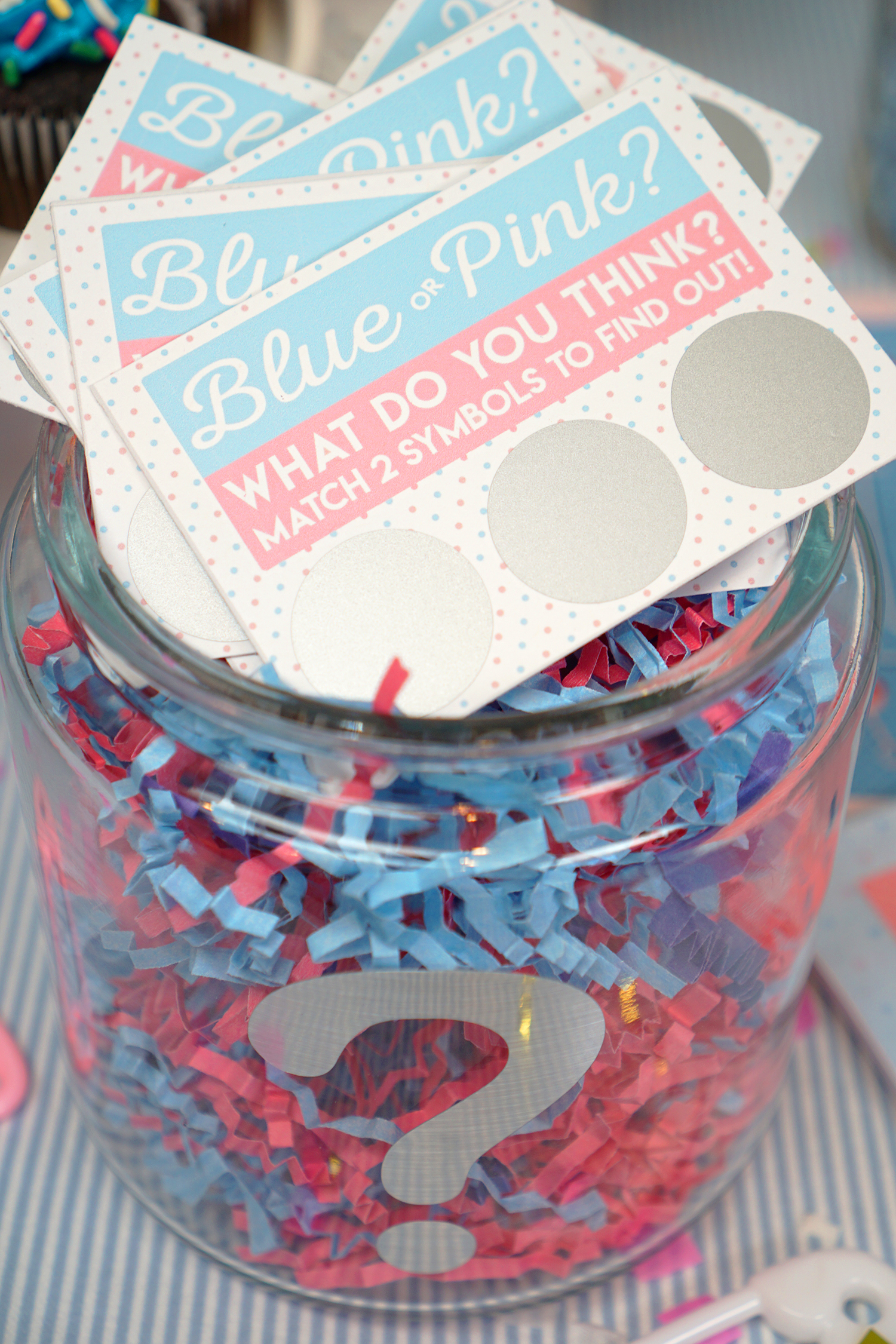 For our gender reveal party, we used these SUPER fun DIY Scratch-Off Cards to reveal the baby’s sex, and they were a HUGE hit! (You can grab the free printable here to make your own!) 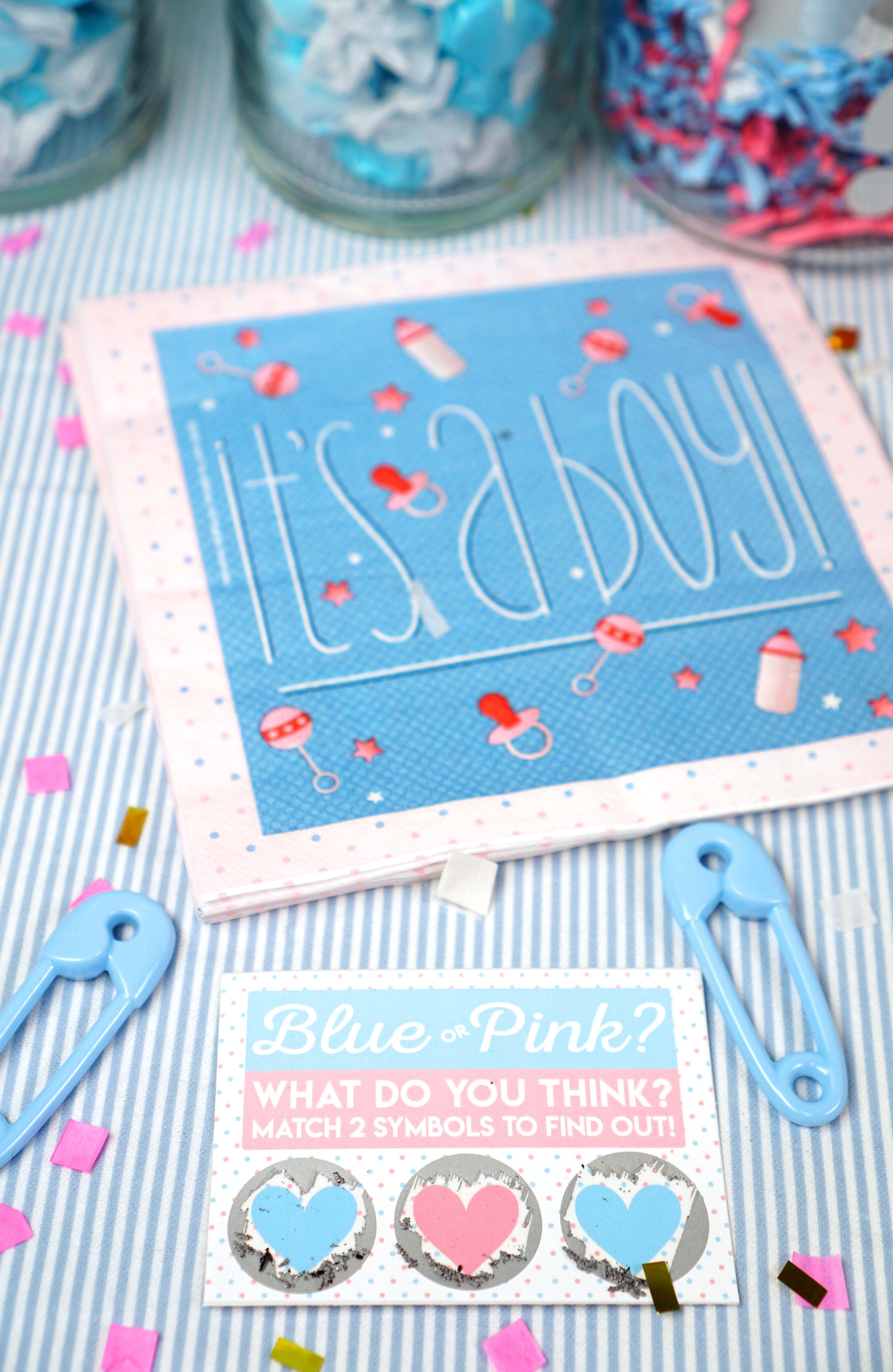 Each of the cards has three colored hearts including one of the opposite color, so guests will have to scratch off at least two of the circles before they find the winning answer – SO. MUCH. FUN! 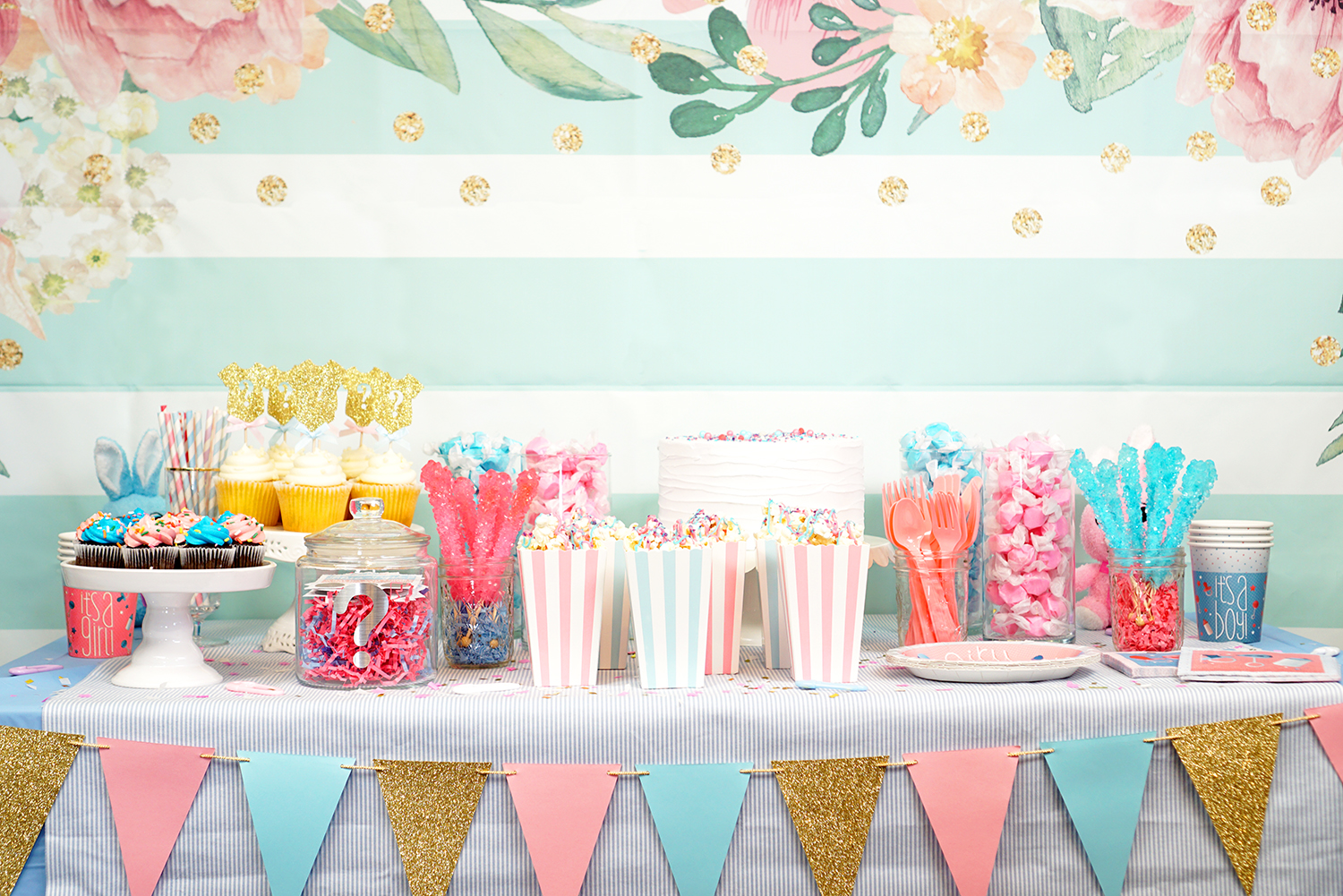 With all of these fun tips and these adorable Sweet Surprise party supplies, your gender reveal party is sure to be a smashing success! 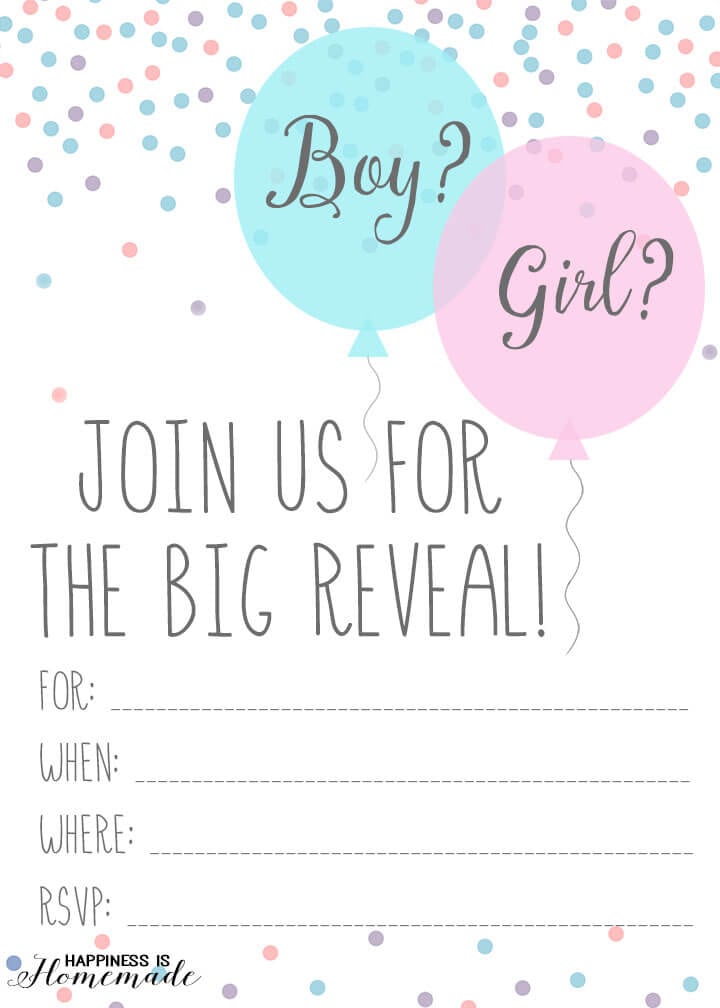 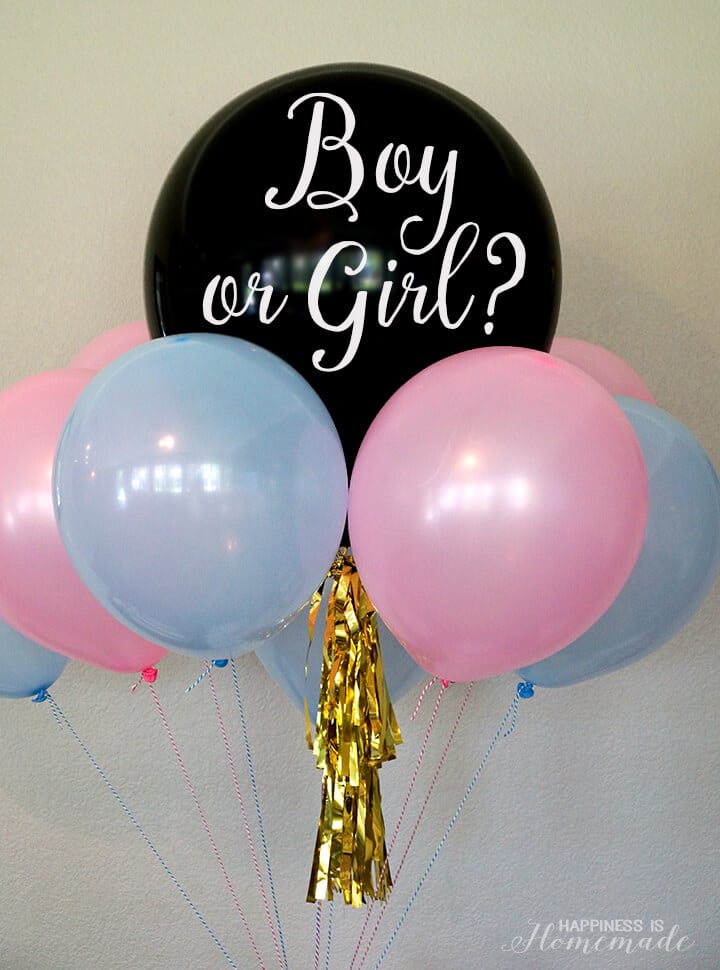 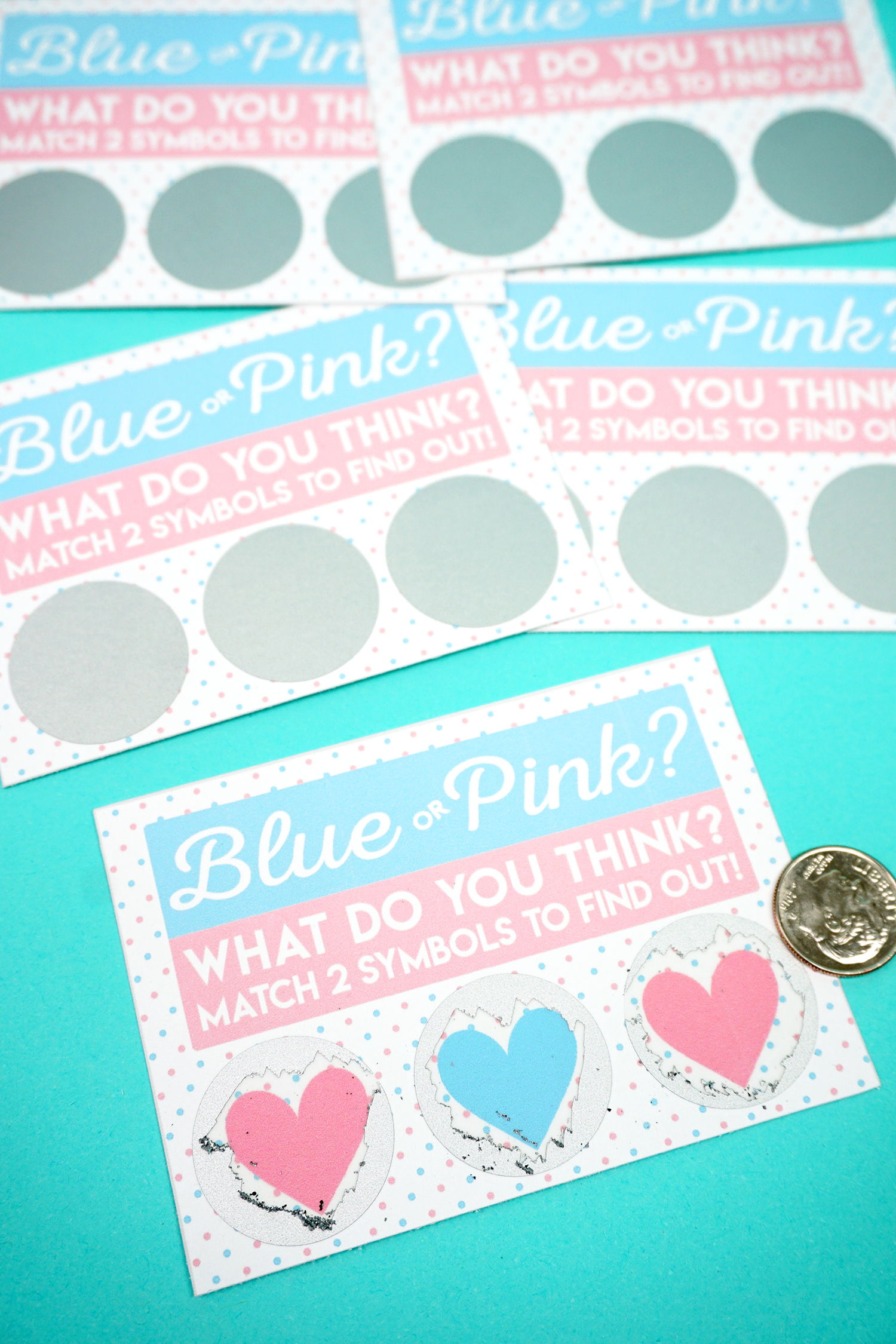 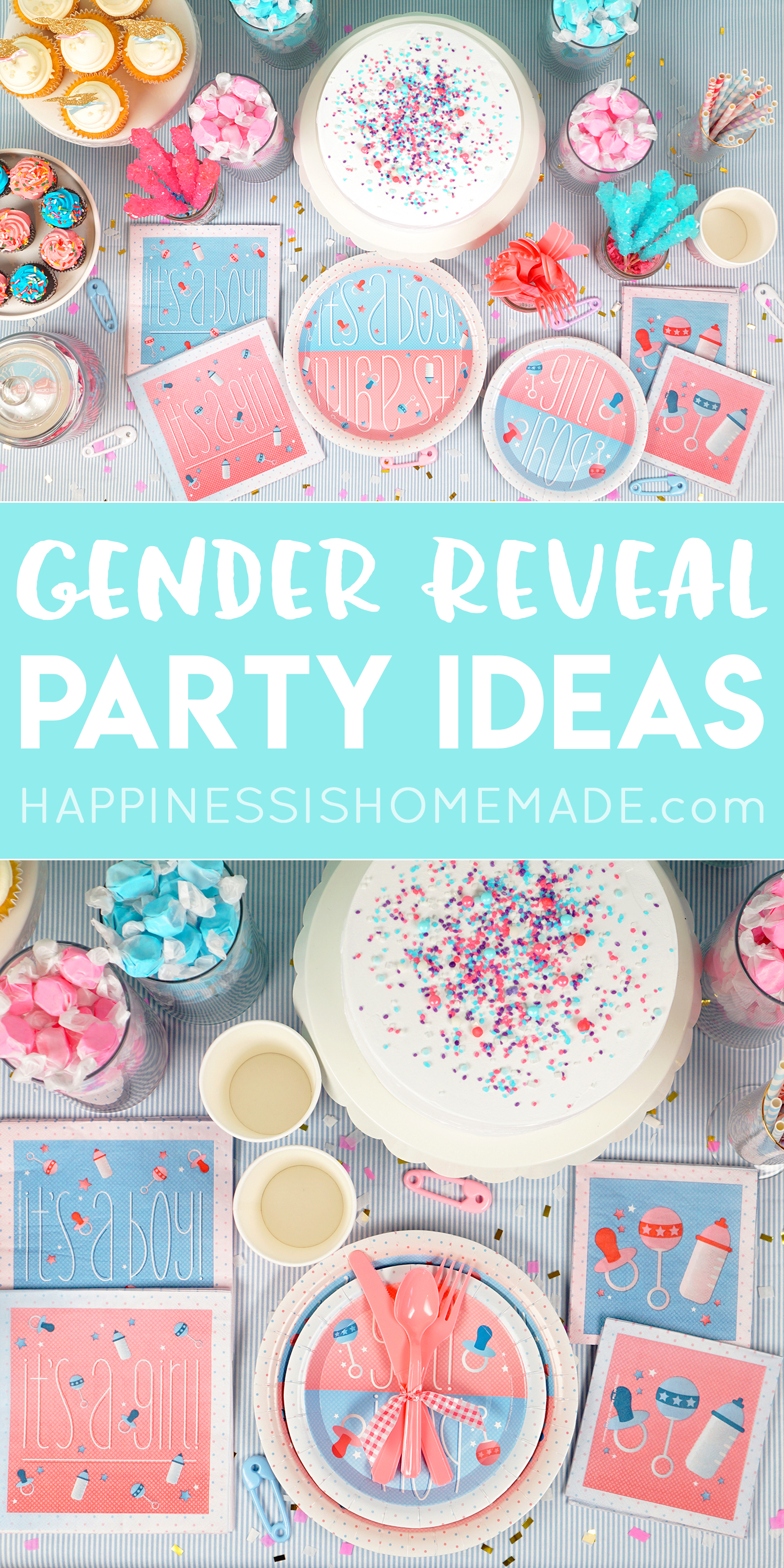