How to make a homemade DIY bacon shaped piñata that’s sure to be the highlight of your next party! SO much fun! 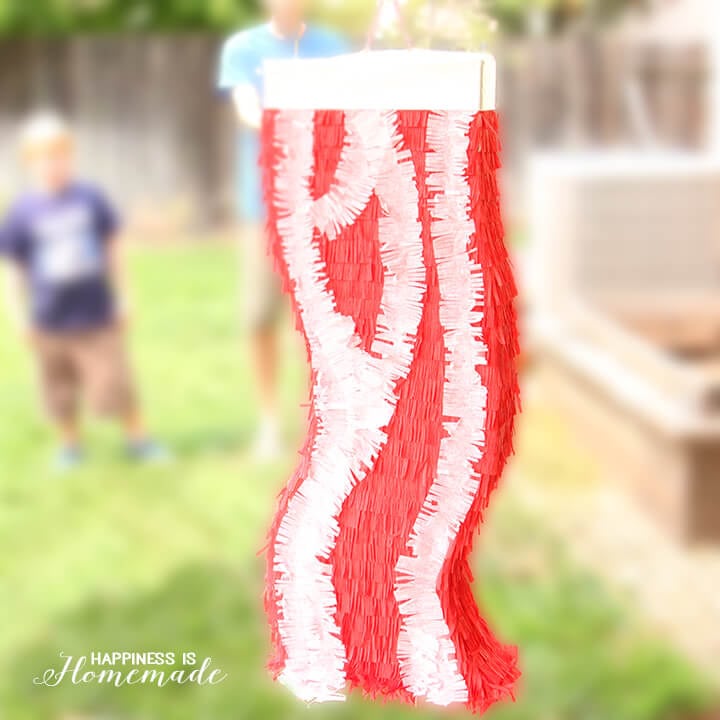 My youngest son, Simon, recently turned five, and his choice of party theme was a bit unconventional. He requested a “Bacon Party” complete with a bacon piñata, and I was excited to take on the challenge! I knew from the beginning that I was going to have to create my own DIY piñata, so I gathered up some basic supplies and got to work. 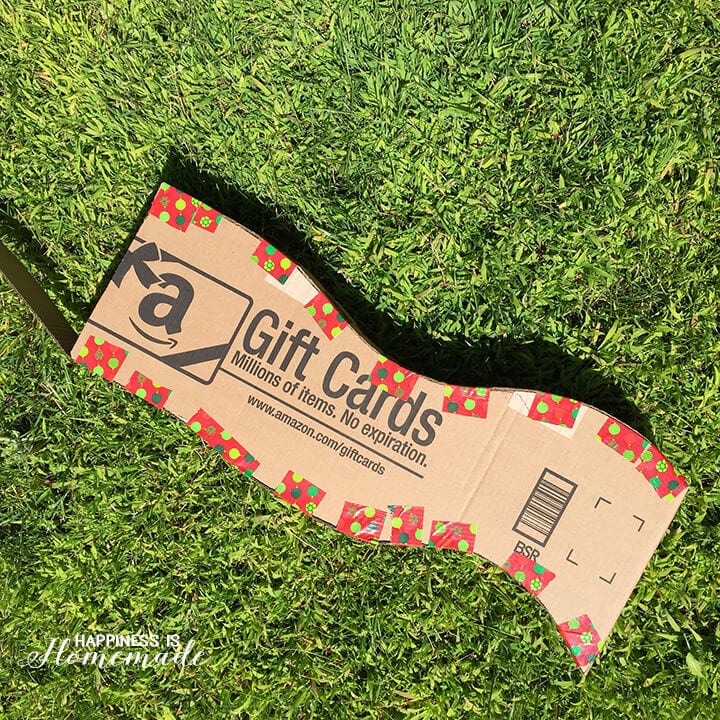 Start by cutting (2) identical bacon shapes from the cardboard box to serve as the front and back of the piñata. Cut one or more long 3″ wide strips to serve as the top, sides, and bottom of the piñata. Use plenty of 4″ long strips of Duck Tape to secure all of the cardboard pieces together. You want the piñata to feel sturdy and hold together, but you don’t want it to be so strong that it becomes unbreakable. I left the top length of 3″ strip open so that we could fill the piñata later. 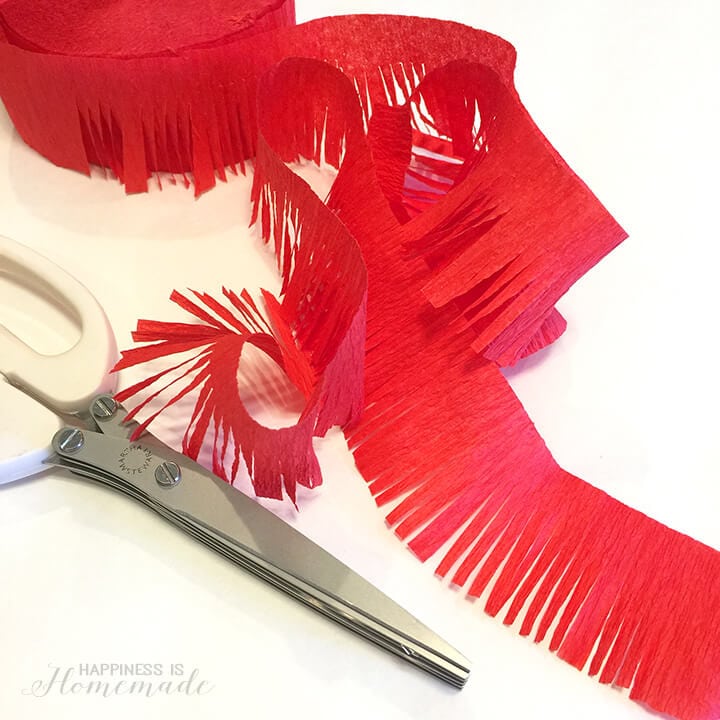 Use the shredding scissors to create fringe out of the red crepe paper streamers. (Note: my piñata was about 14″ x 28″ and I used 2/3 of a roll of red streamers to complete this project.) 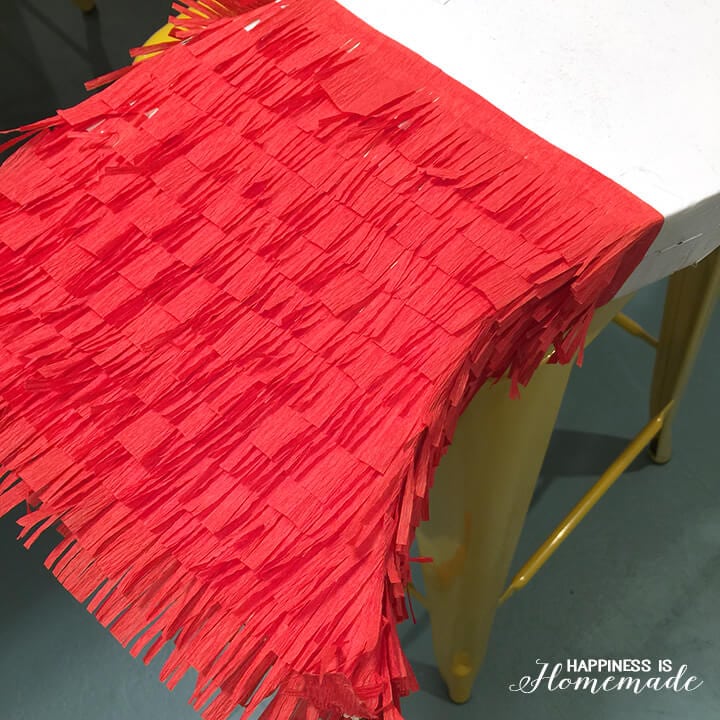 Starting at the bottom, wrap the fringed streamers around the piñata, overlapping each row slightly, and securing in place with the glue stick. 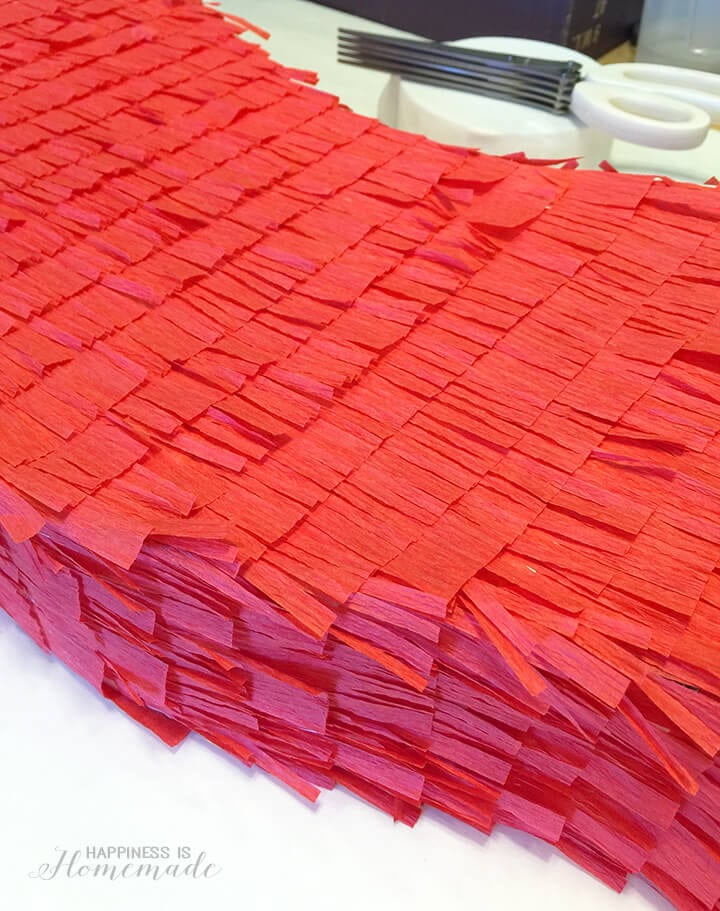 Keep on wrapping and gluing… 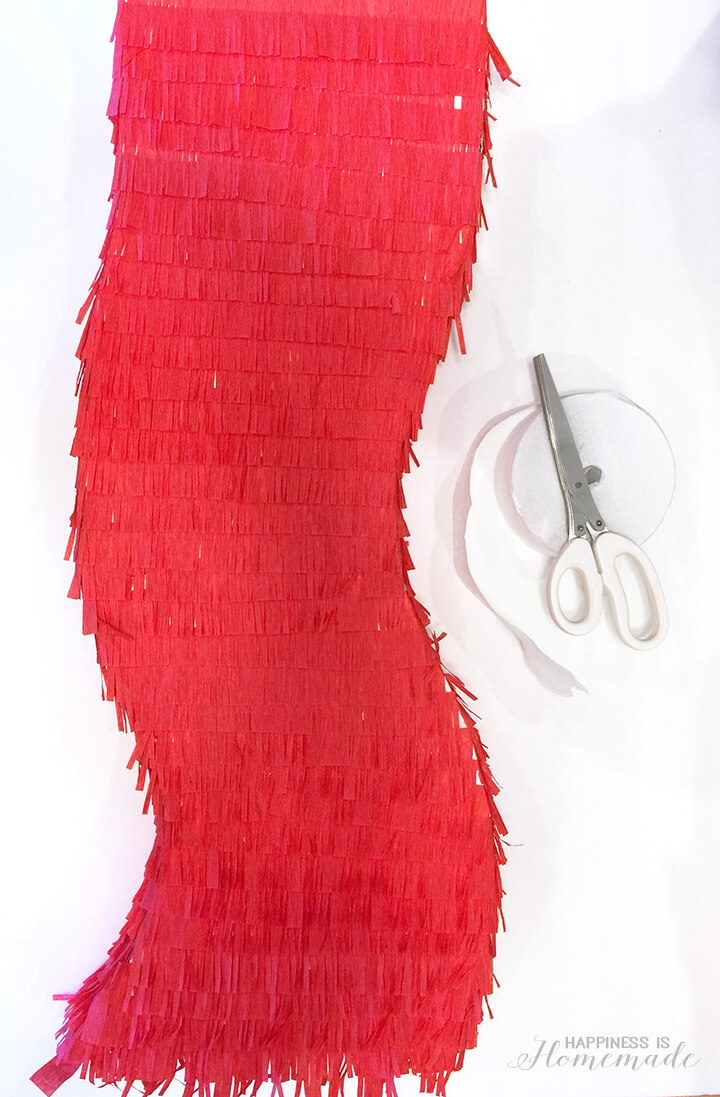 …until the entire bacon form is covered in red streamers. This step took a little bit of time and patience, but don’t get too caught up in making it perfect. The entire purpose of this project is to be smashed to smithereens by a bunch of kiddos, so don’t worry about any imperfections. 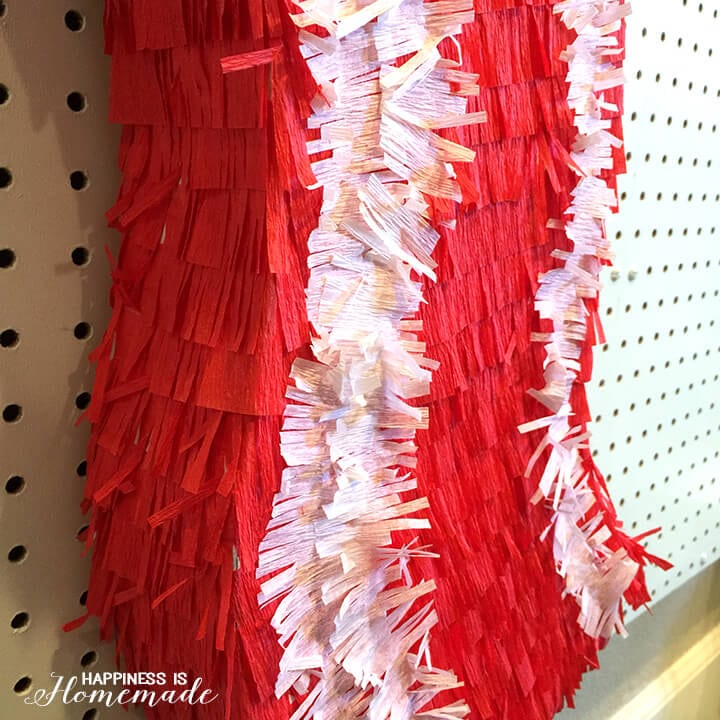 Use the fringe scissors and white streamers to add some details to the bacon shape. 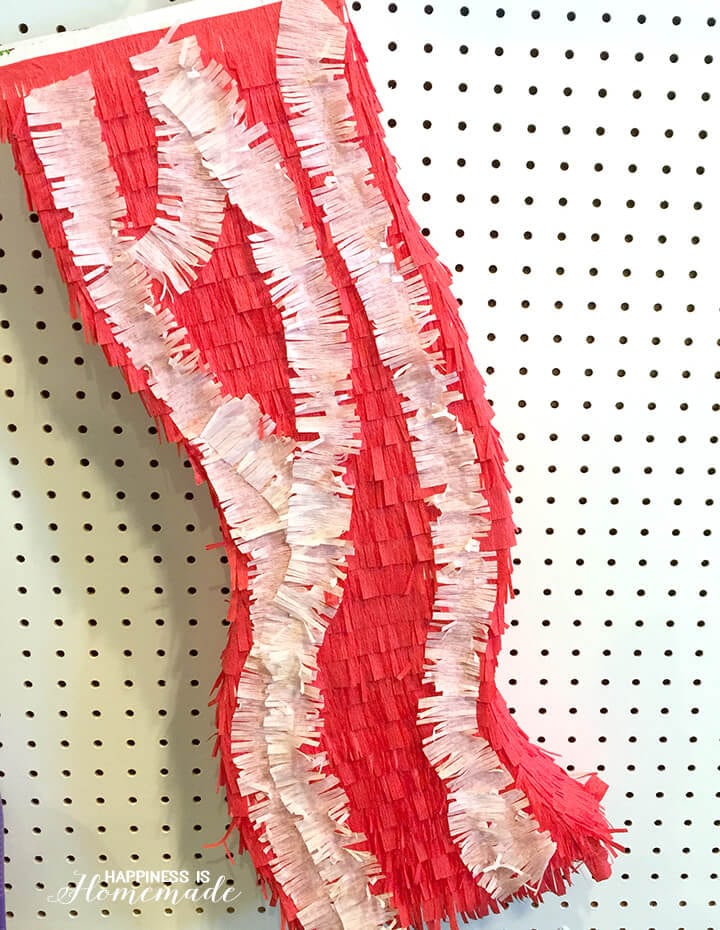 Tada! Now all that’s left to do is fill ‘er up! 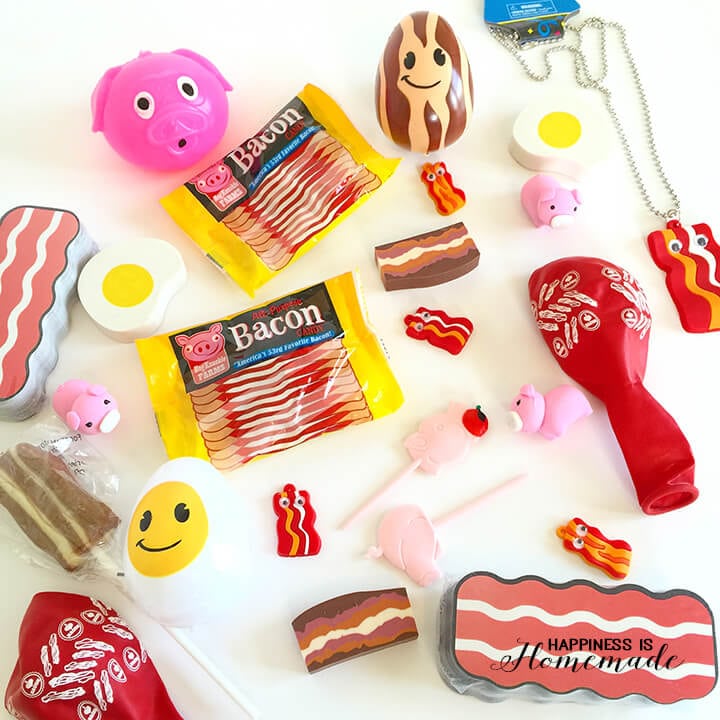 Oriental Trading Company blew my mind when I discovered a TON of bacon themed party supplies on their site! We filled our piñata with bacon lollipops, bacon candy, bacon playing cards, bacon charms, bacon necklaces, bacon & eggs candy-filled eggs, bacon & egg erasers, pig erasers, pig splat balls (which were the HUGEST hit with the kids!) and “I ♥ Bacon” balloons. Don’t worry, those pig appetizer picks weren’t part of the piñata fillers, but they did end up on our food table! 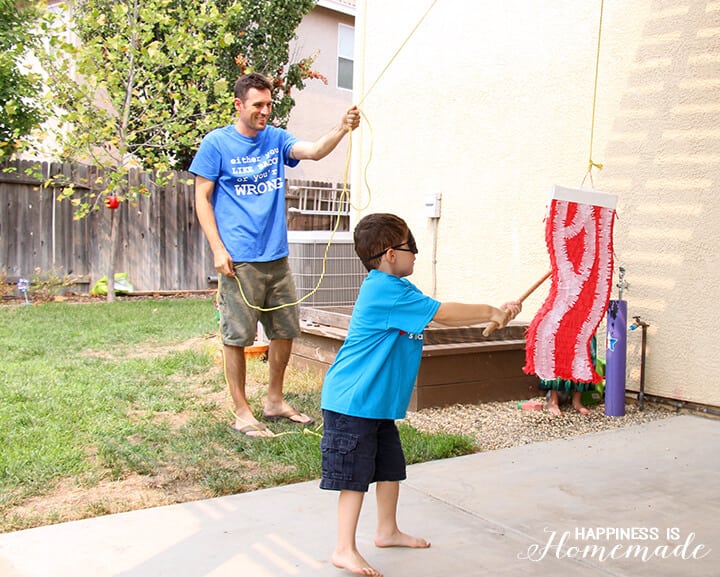 The birthday boy got the first whacks, but he couldn’t crack the piñata open. 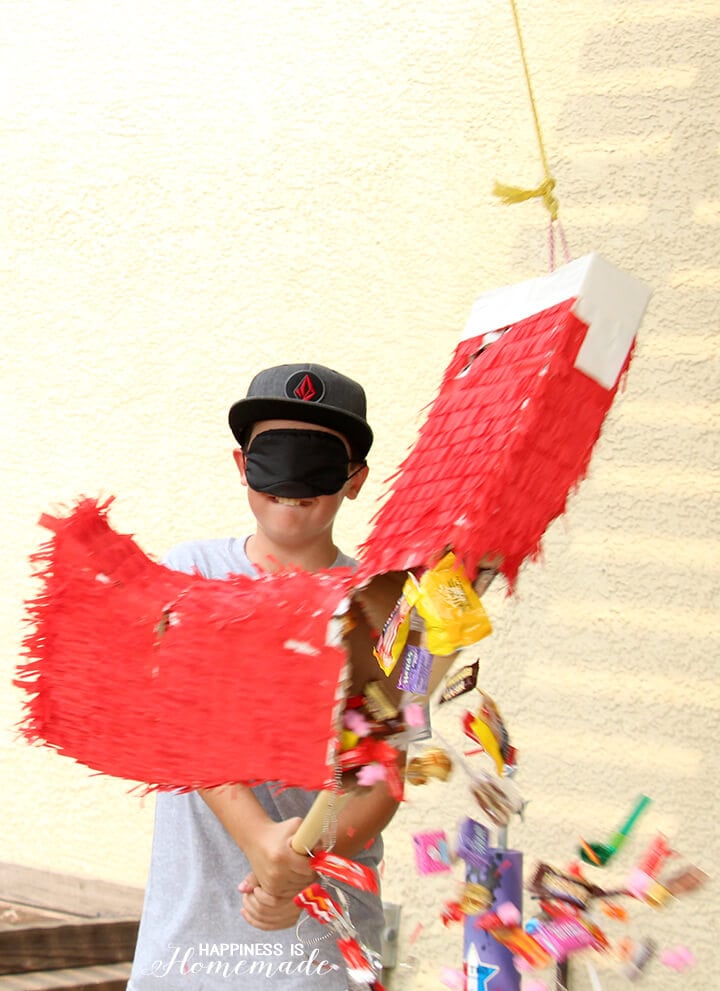 The piñata was strong enough to last through all eleven party guests (ages 2-9) taking turns at it, and then my oldest son broke it wide open! 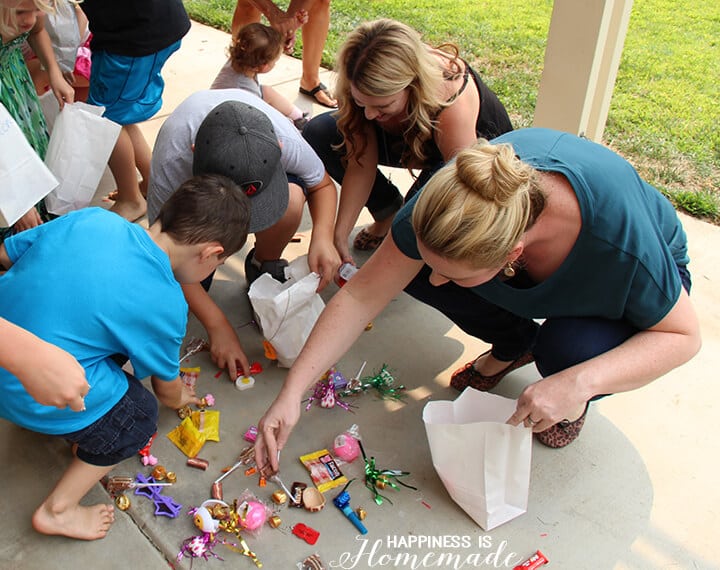 Everyone scrambled to collect all of the candy and bacon goodies. All in all, our bacon party was a huge success, and the bacon piñata was definitely the hit of the party!