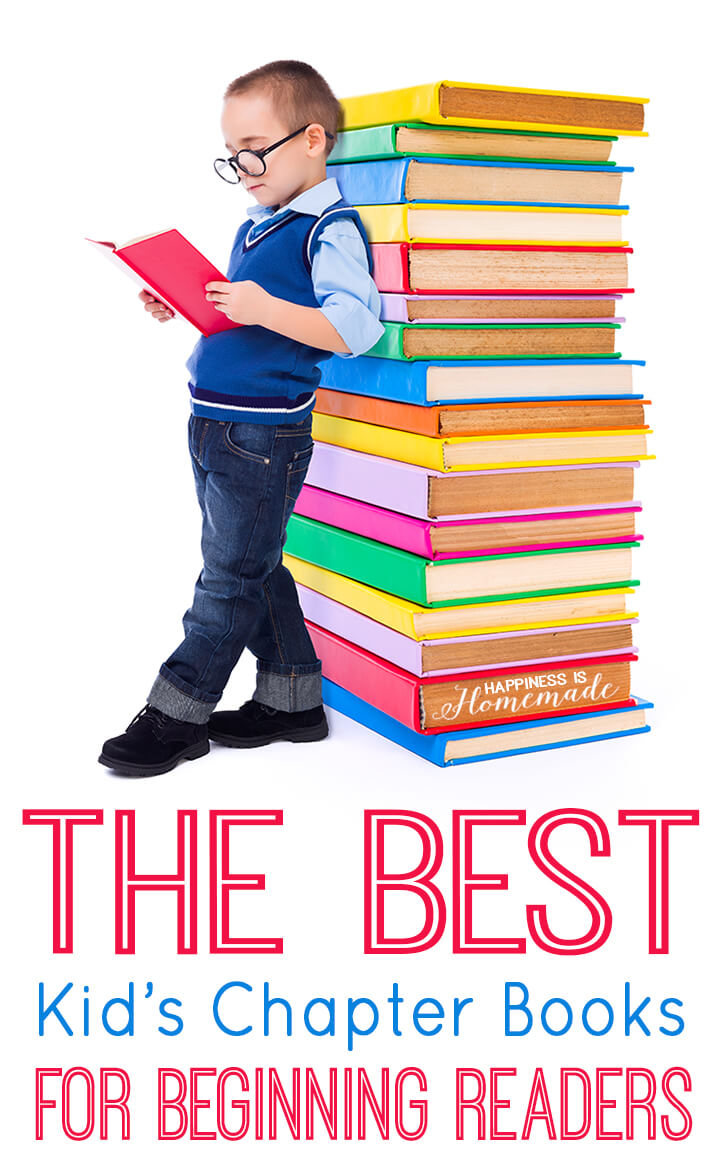 March is National Reading Month, and there’s no time like the present to get involved and help your children fall in love with reading. For some emerging readers, the thought of reading a chapter book can seem daunting and overwhelming, but it doesn’t have to be scary! I have put together a list of some of our favorite early reading chapter books, all of which have larger font sizes, lots of illustrations, and engaging action-packed storylines to keep young readers interested. We’re calling it “The Best Kid’s Chapter Books for Beginning Readers.”

Without further ado, here they are…in no particular order: 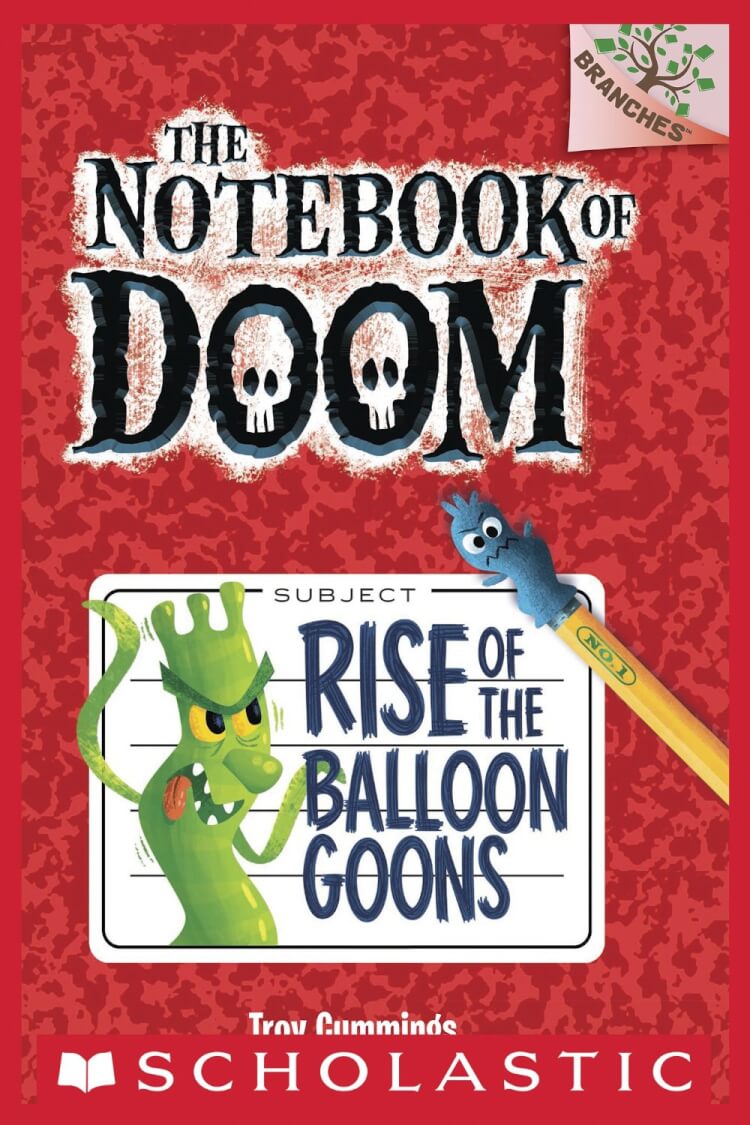 The Notebook of Doom series by Troy Cummings

Monsters + Humor + Fun = THE NOTEBOOK OF DOOM! Alexander has just moved to a new town where he is about to uncover all sorts of monsters! He finds an old notebook with the word “DOOM” inscribed on the front cover. The Notebook of Doom, which Alexander now holds, contains top secret information about monsters! In this first book, Alexander goes up against spooky balloon goons–unique and twisted arm-waving balloon guys! This book is full of humor, engaging black-and-white illlustrations, and of course . . . monsters!

This series is part of Scholastic’s early chapter book line called Branches, which is aimed at newly independent readers. With easy-to-read text, high-interest content, and illustrations on every page, these books will boost reading confidence and stamina. (Branches books are some of our most favorites!) 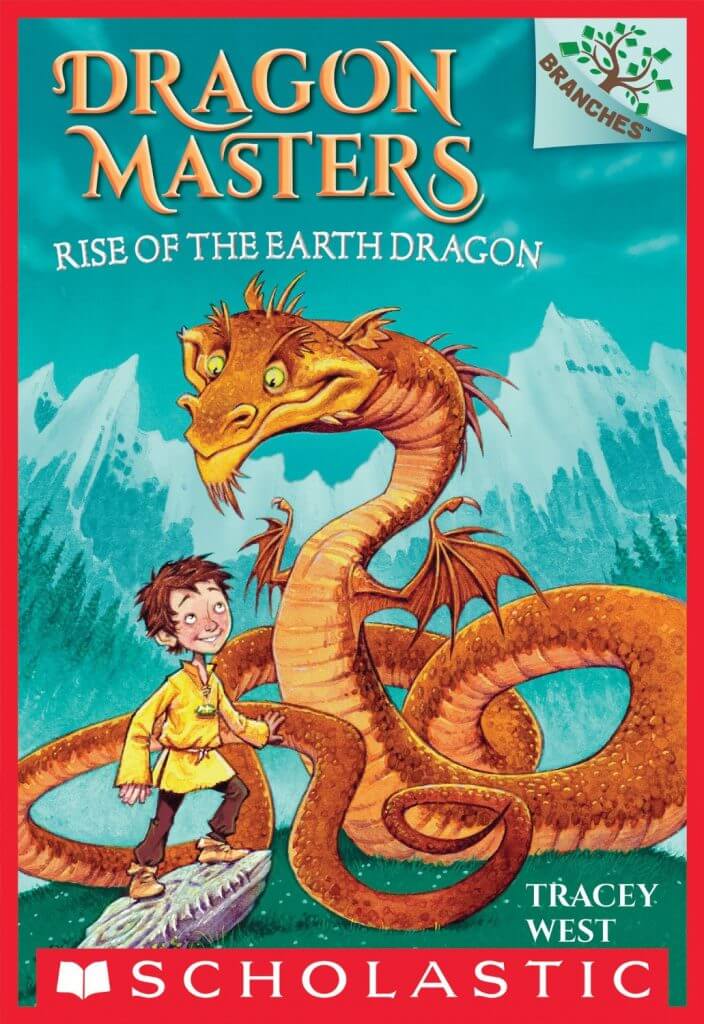 Dragon Masters: Rise of the Earth Dragon by Tracey West

DRAGON MASTERS has it all! Dragons, a Dragon Stone, a king, a wizard, and magic! In the first book in this fully-illustrated series, 8-year old Drake is snatched up by King Roland’s soldier and taken to the castle. He is to be trained as a Dragon Master. At the castle, he is joined by three other young Dragon Masters-in-training: Ana, Rori, and Bo. The Dragon Masters must learn how to connect with and train their dragons–and they must also uncover their dragons’ special powers. Does Drake have what it takes to be a Dragon Master? What is his dragon’s special power? 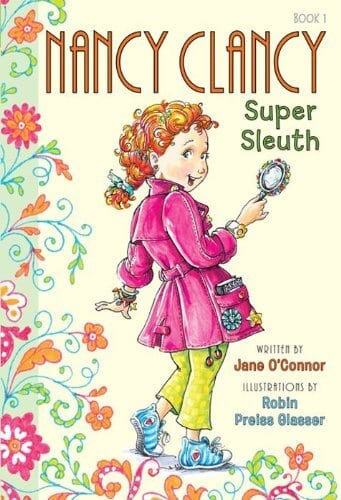 Kids who grew up with Fancy Nancy picture books can spend some quality time with their BFF, because Nancy Clancy is now starring in her own chapter books! Fancy Nancy: Nancy Clancy, Super Sleuth is the first in a series of delightful middle-grade mysteries. Sassy Fancy Nancy is now a detective. Told in the third-person narrative, when one of Nancy’s classmate’s most special possessions disappears from school, it’s up to her to save the day. With the help of her friend Bree, she follows the clues to an unexpected source. Fans of Nancy Drew’s Clue Crew will be happy to see a new Nancy join the ranks of super sleuths. 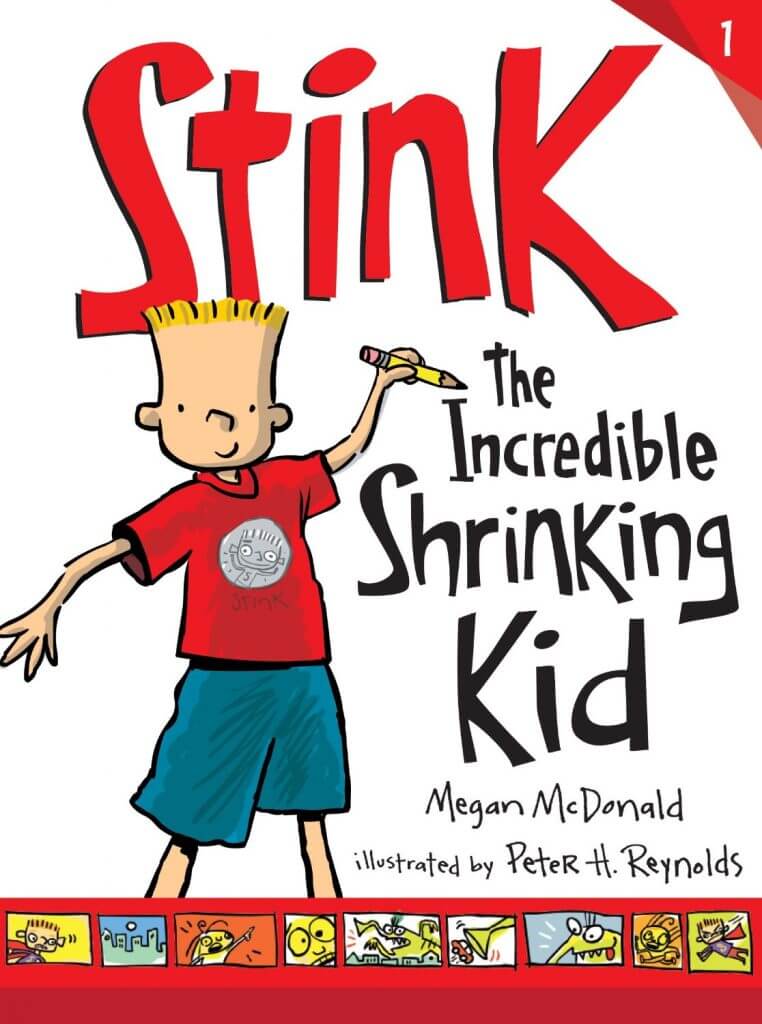 The pesky little brother in McDonald’s popular Judy Moody series gets his own book and tells his own story here. Little is the word for James (“Stink”) Moody; he’s short, the shortest kid in his second-grade class. Is he shrinking? Judy is his bossy older sister, but he learns to handle her. For Presidents’ Day, Stink’s hero is not big tall Lincoln but another James, James Madison, the shortest president ever. The narrative is fun and laced with puns–from Mt. Trashmore to “newt in shining armor,” and it’s peppered with black-and-white illustrations, including comics (“The Adventures of Stink”) reflecting Stink’s triumphant fantasies. 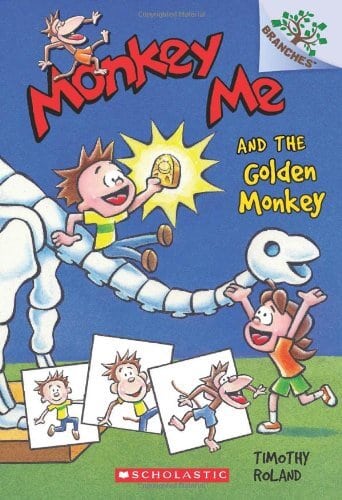 Monkey Me and the Golden Monkey by Timothy Roland

When Clyde gets excited, he brings a whole new meaning to “monkeying around!” Clyde is an energetic student who just can’t sit still. After eating a banana that has been zapped by lasers on his class field trip to the science museum Clyde starts to feel weird. Now every time he gets excited, he transforms into a monkey! Only with the help of his twin sister, Claudia, can Monkey Clyde stay out of trouble. 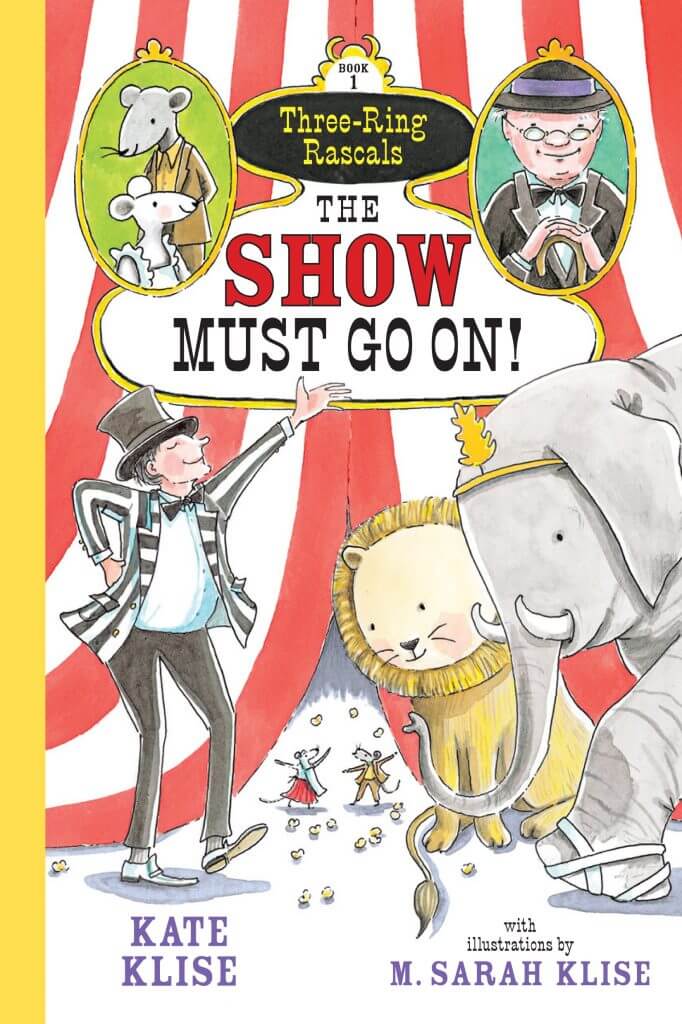 Three Ring Rascals: The Show Must Go On! by Kate Klise

When Sir Sidney, a kindly old circus owner, becomes too tired to travel with his show, he places a Help Wanted ad in the newspaper. Enter Barnabas Brambles: “I have a degree in lion taming from the University of Piccadilly Circus.” But does Leo the lion need taming? Will Elsa the elephant still get her gourmet peanuts? And what will Brambles say when he discovers Bert and Gert—two mice who travel with the circus on popcorn cleanup patrol? Brambles has big plans: More cities! More shows! No more free popcorn. Soon he’s made a big mess of Sir Sidney’s Circus, but Leo, Elsa, Bert, Gert, and the rest of the performers agree: The Show Must Go On! 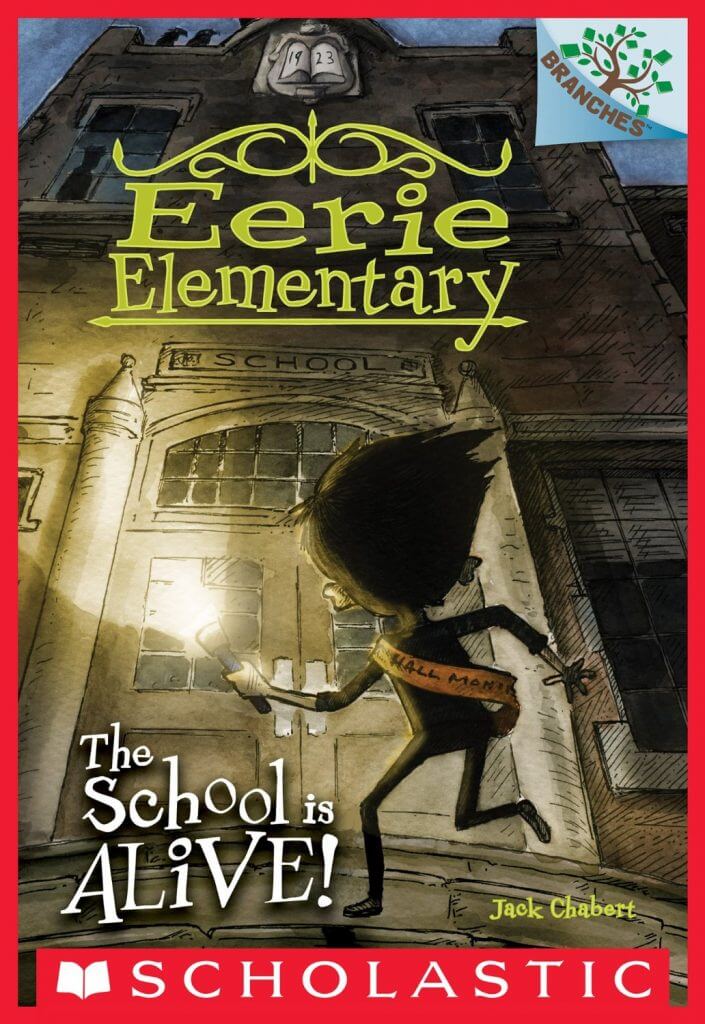 Eerie Elementary: The School is Alive! by Jack Chabert

Eerie Elementary is one scary school! In this first book in the series, Sam Graves discovers that his elementary school is ALIVE! Sam finds this out on his first day as the school hall monitor. Sam must defend himself and his fellow students against the evil school! Is Sam up to the challenge? He’ll find out soon enough: the class play is just around the corner. Sam teams up with friends Lucy and Antonio to stop this scary school before it’s too late! 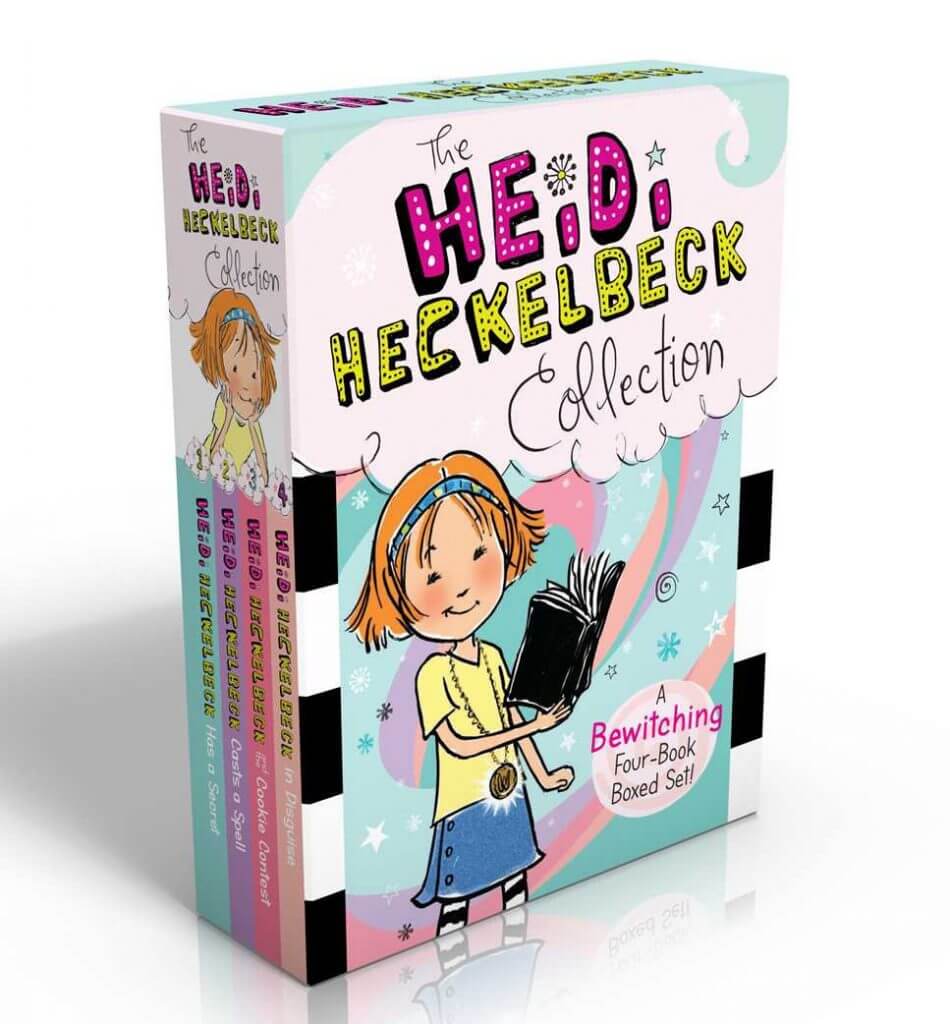 Heidi Heckelbeck seems like any other eight-year-old, but she has a secret: She’s a witch in disguise. Careful to keep her powers hidden (but excited to use them all the same), Heidi’s learning to live like any other kid—who just happens to be witch. And with easy-to-read language and illustrations on almost every page, Heidi Heckelbeck chapter books are perfect for beginning readers. 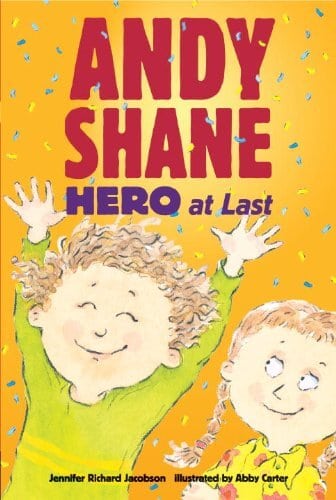 There are two things Andy Shane wants more than anything — to win the contest for best-decorated bike in the parade, and to be a hero. He has a great idea for the bike part, although high-strung Dolores is upping the ante with her paper-daisy-covered helmets for her and her cat. But the second goal has Andy stumped, until the parade is in motion and his eagle eyes catch the reason why the drum corps has suddenly thrown the marchers out of whack. Pass the baton to a lovably low-key hero as he saves the day in a new adventure for early chapter-book readers. 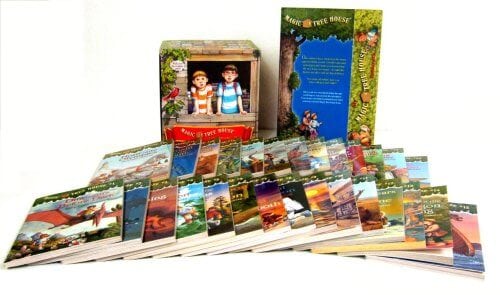 When Jack and Annie discover a mysterious tree house filled with books, they never dream that it will take them on exciting adventures around the world and throughout history! The story begins withDinosaurs Before Dark, when Jack and Annie are whisked back to the prehistoric past. Can they figure out how to get home before dark . . . or will they become a dinosaur’s dinner? With a total of fifty-one adventures currently available, kids will never get tired of traveling the world and completing missions with their new friends Jack and Annie. 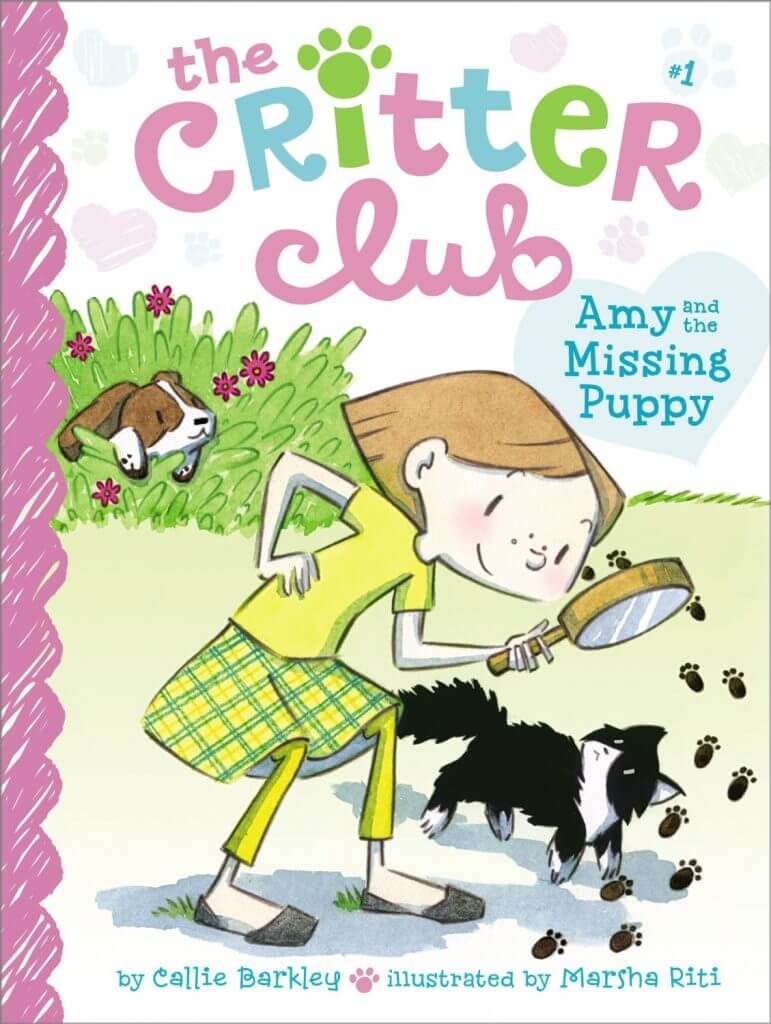 The Critter Club: Amy and the Missing Puppy by Callie Barkley

It’s Spring Break in Santa Vista, and everyone has big plans…everyone except for Amy, that is! As her best friends head out of town on exciting adventures, Amy resigns herself to helping out at her mom’s vet clinic. At least she’ll be around cute animals! But when Santa Vista’s cold and elusive millionaire, Marge Sullivan, brings her puppy Rufus for a check-up, Amy encounters an unexpected mystery. After her friends return home, the girls get to the bottom of what happened to Rufus—and discover a way to help other lost and lonely animals in their town. 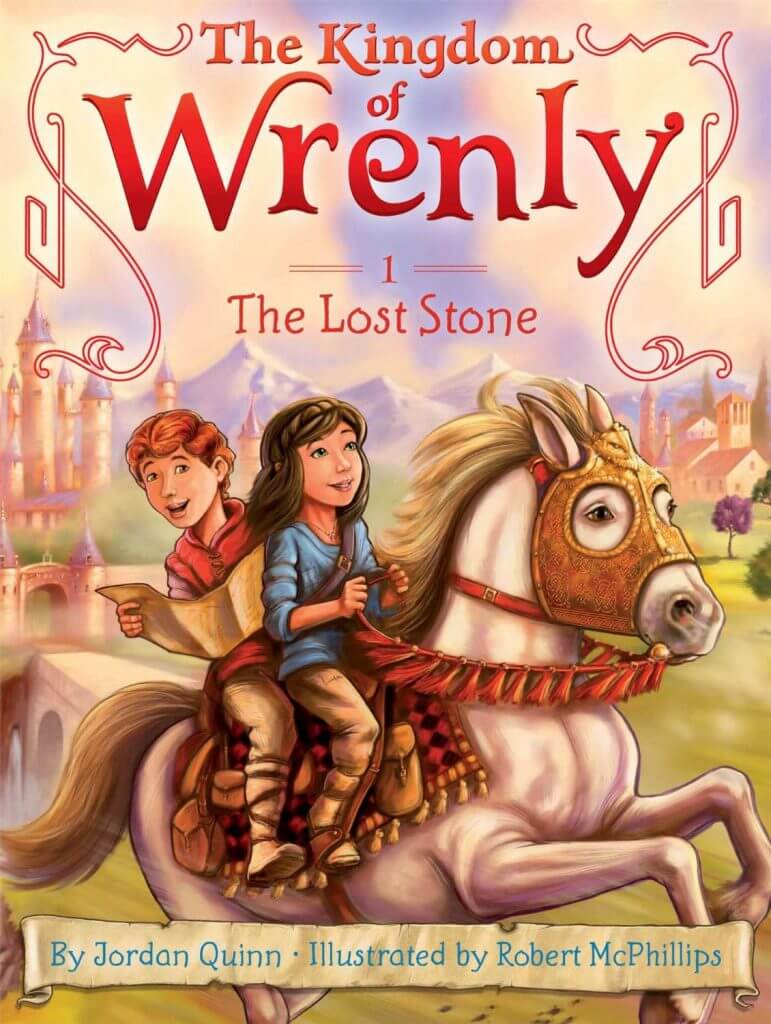 The Kingdom of Wrenly: The Lost Stone by Jordan Quinn

Meet Lucas, the eight year-old prince, and Clara, the daughter of the queen’s seamstress. Lucas is an only child who longs to make friends and go on adventures. Clara knows the kingdom well, so she and Lucas team up and explore the lands of Wrenly! On their exciting adventures, they travel to all the main attractions of Wrenly: Primlox (the island of fairies), Burth (the island of trolls), Crestwood (the island of dragons), Hobsgrove (the island of wizards), and the beautiful Mermaid’s Cove. King Caleb has promised to reward the person who finds [Queen Tasha’s] precious stone, and Lucas and Clara are determined to search the entire kingdom until they find it! 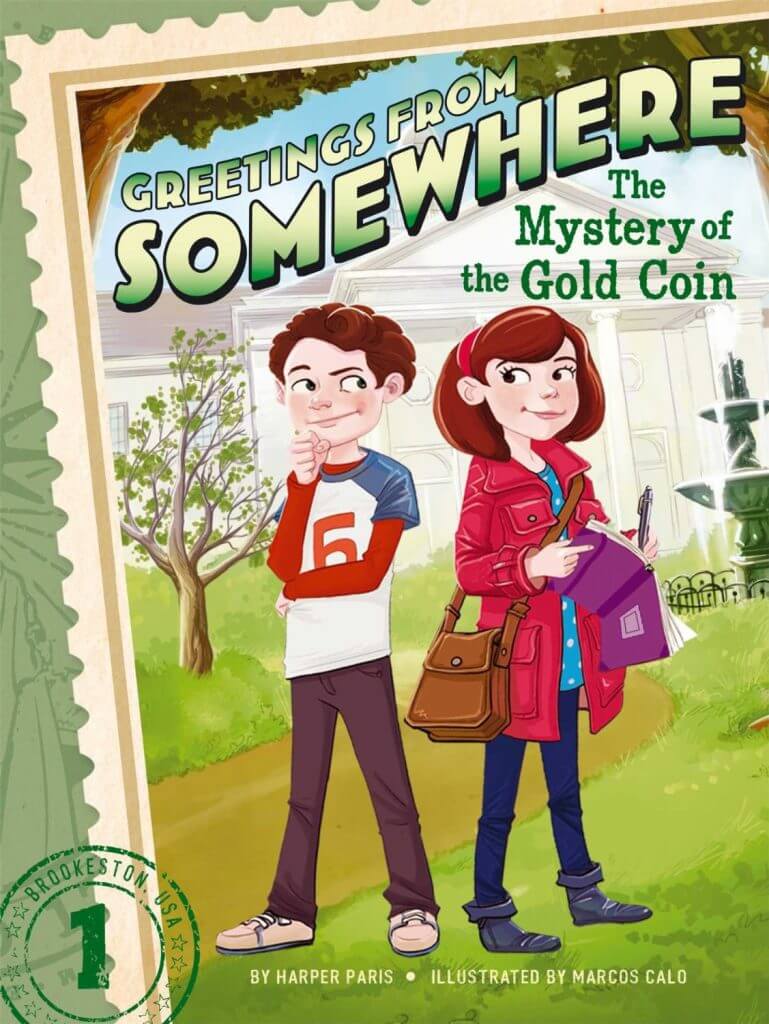 Greetings from Somewhere: The Mystery of the Gold Coin by Harper Paris

In the first book of this new chapter book series about mystery, travel, and adventure, twins Ethan and Ella must find a missing coin before they move away from their hometown! When Ethan and Ella learn that their mother has accepted the position of travel writer for The Brookeston Times, they are not happy. Move away from Brookeston? Say good-bye to all their friends? What could be worse?…The morning of their departure, Ethan realizes he’s lost the coin [from their beloved Grandpa Harry]! Together, he and Ella must retrace their steps from the day before. Will they solve the mystery of the missing coin before it’s time to head to the airport?

Here are a few of these favorite beginner chapter books on my son’s nightstand: 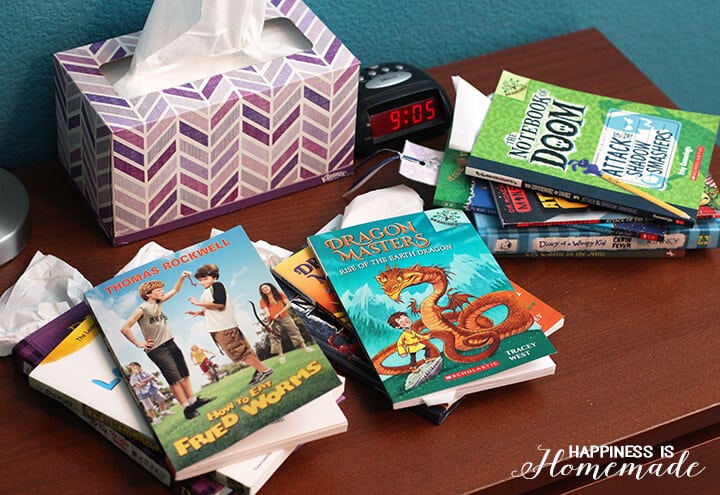 My middle son, Sutton, is a voracious reader, and he always has at least 5-10 books on his nightstand at any time. He won’t let me put any of them back on the shelf because he loves flipping back and forth and reading several books at a time. He’s also fond of using tissues to replace his missing bookmarks, so I inevitably end up with discarded tissue bookmarks all over the floor! 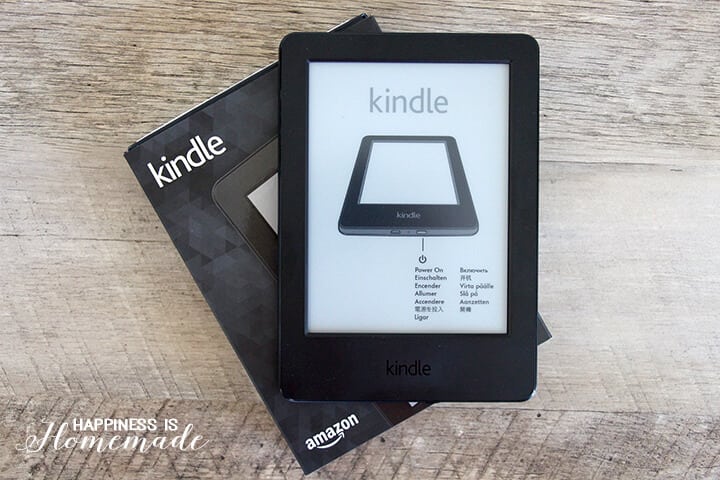 We recently gifted Sutton with a Kindle e-reader, and it has been fantastic (for him and us!). He is able to read several books at once without cluttering his nightstand, and since the Kindle e-reader has a built-in bookmark function, he’s always easily able to find his place (no more tissue mess – yay!). The Kindle has some really awesome features that are perfect for emerging readers. There’s a dictionary function that not only defines unknown words, it also imports them into the Vocabulary Builder which stores words the child has looked up and allows them to quiz themselves with flash cards. The Word Wise setting provides short and simple definitions above difficult words as they’re reading along. Kids can even earn achievement badges when they meet and exceed their reading goals! The new ultra lightweight Kindle also features a touch screen, faster processor, twice the storage, and a battery that lasts for weeks! 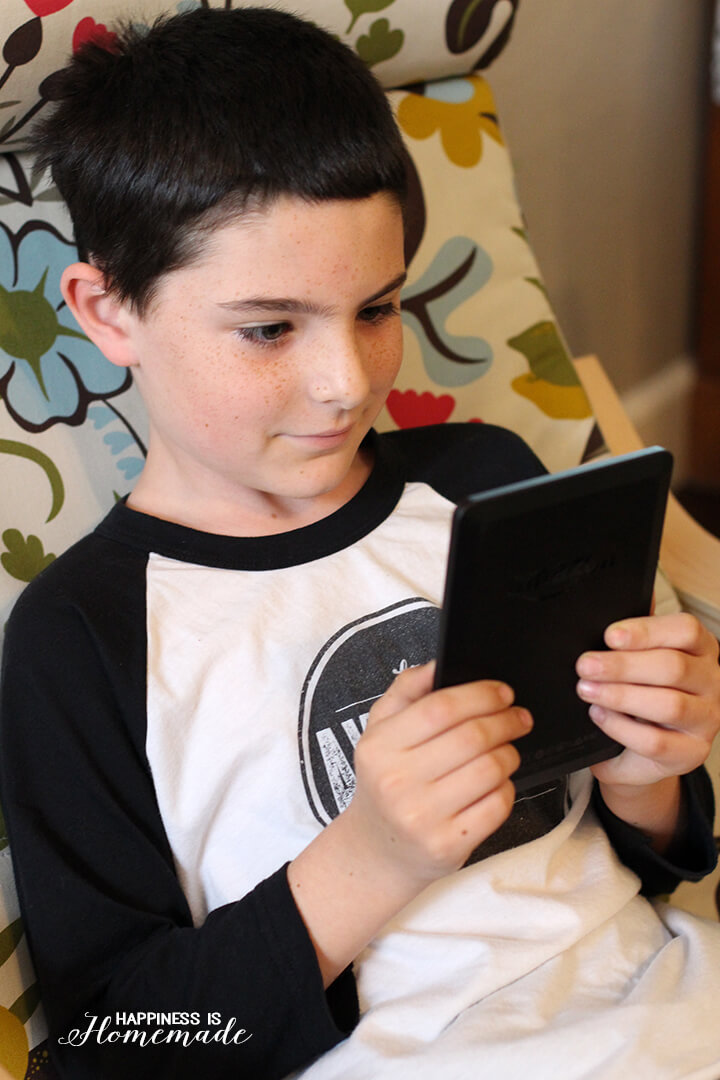 We signed Sutton up for Amazon FreeTime Unlimited (subscriptions start at $2.99/month) which gives him access to thousands of books, movies, games and educational apps for kids. Amazon FreeTime Unlimited allows kids to explore a world of age-appropriate content on their own, and parents don’t have to waste time and money guessing which books or apps their kids will enjoy. We recently discovered that the entire Harry Potter series is available on FreeTime Unlimited, and I have a good idea how we’ll be spending our summer break now! 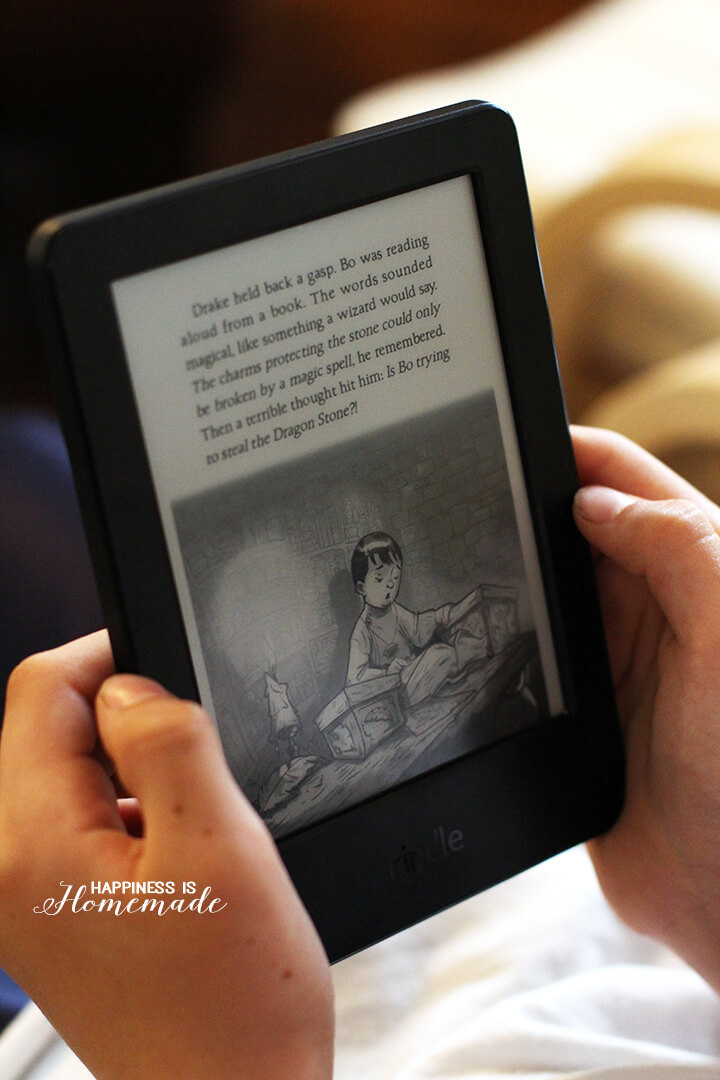 The parental controls in FreeTime Unlimited are also really great. Parents can choose what content their child is able to see, as well as set educational goals and time limits. Kids are then able to freely explore TONS of books, educational apps, movies and more, and (best of all!) there are no ads or in-app purchases. I highly recommend it!

I was selected for this opportunity as a member of Clever Girls and the content and opinions expressed here are all my own.