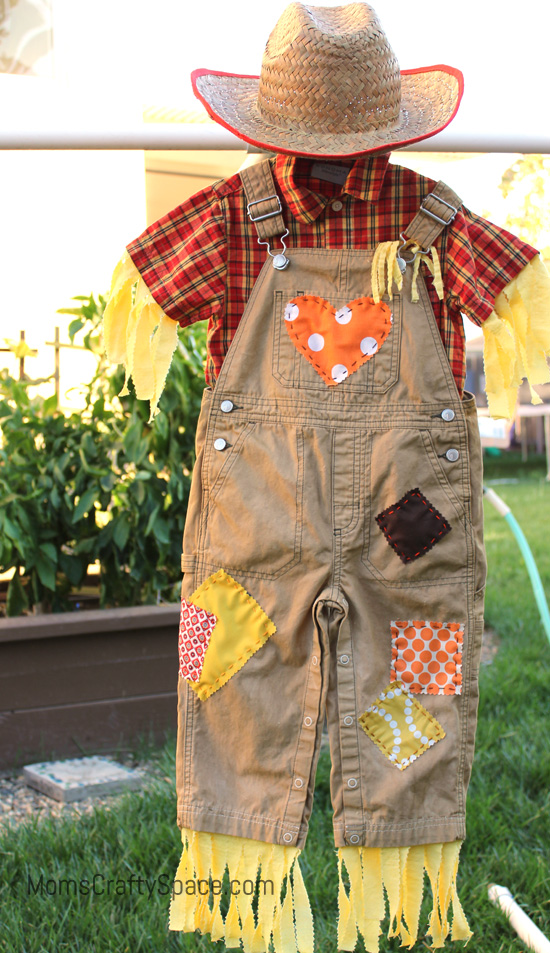 I love everything about Halloween, especially the costumes. I’ve always loved the idea of getting to play dress up and be someone completely different for a night. I also love making our own costumes, and I try to create one for at least one of my boys every year. Since the older boys have their hearts set on being Mario and Luigi this year (and Dad already bought them their costumes at Target), that left my toddler as the recipient of the Mom-made costume this year. 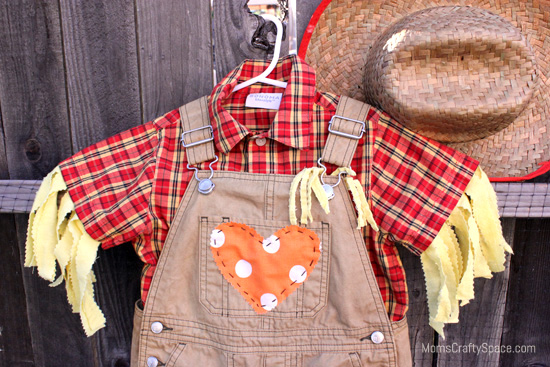 I’m also pretty cheap thrifty when it comes to costume making, and I always try to use and upcycle things that we already have around the house. I had been toying around with the idea of making a scarecrow costume, but the colors of my cast-off clothing were all wrong. When I received a package full of RIT Dye a few weeks ago, I knew that it would be perfect for making Simon’s costume. 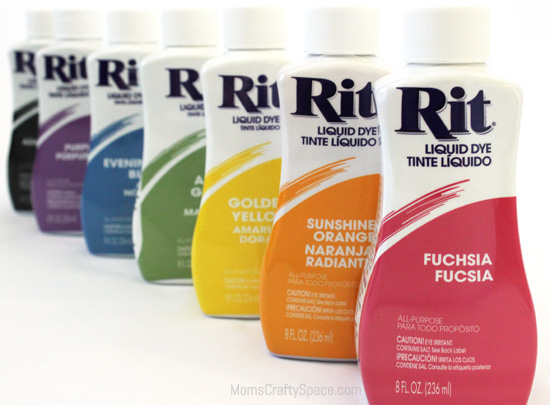 Aren’t these colors awesome? I already have so many more dye projects churning around in my brain! 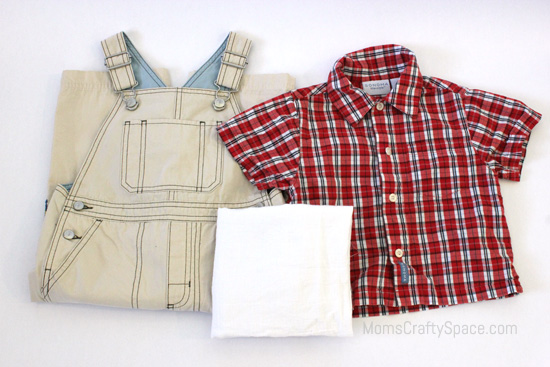 Here’s what I started with: a pair of off-white overalls, a white tea towel and a red and white plaid shirt. 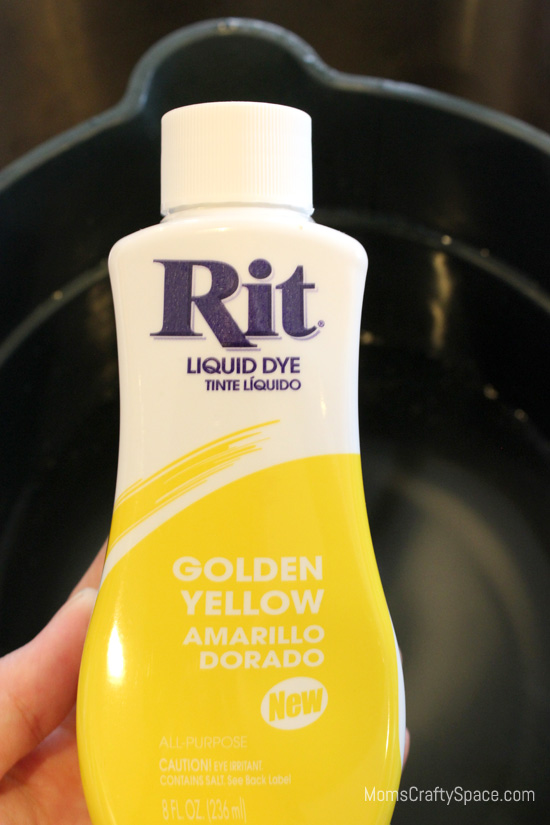 I started by dyeing the tea towel and the plaid shirt Golden Yellow. The dye process is incredibly simple – just mix up a bucket full of HOT tap water (the hot water aids in dye absorption), half a bottle of liquid dye and a cup of salt (use salt when dyeing cotton or linen; vinegar for dyeing silk, wool and nylon). The liquid dye is more concentrated than powdered dye, so you don’t need as much to get intense color. 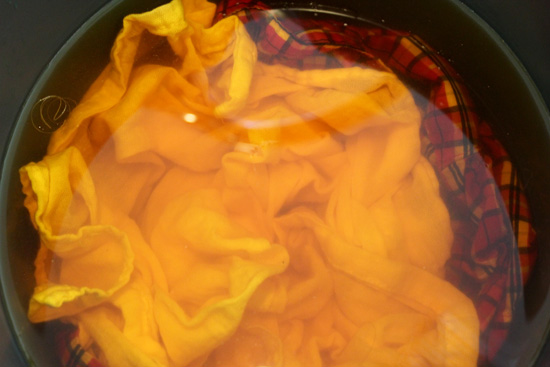 Let it sit for about 10-20 minutes (up to an hour for deeper colors). I used a wooden spoon to stir my clothing around to ensure that it would dye evenly. 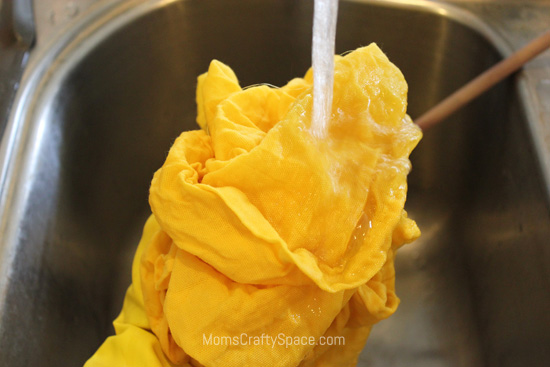 Take your fabric out and rinse it, first in warm and then in cold water until the water runs clear.
I decided that my shirt and the tea towel were a little too matchy-matchy after their Golden Yellow bath, so I added a bit of Sunshine Orange dye into the bucket and put my shirt back in for another ten minutes. Perfect! To darken up the overalls a bit, I added a tiny bit of black to the orange-yellow dye mixture to create brown (as found in the RIT Color Formula Guide). I didn’t want them to get too dark, so I only let them soak for about five minutes before rinsing them. 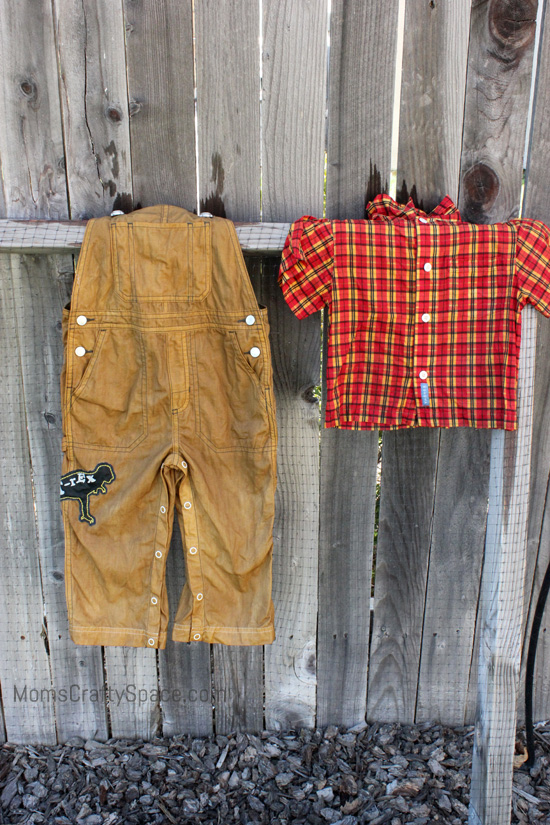 Hang your clothing out to dry. Make sure that you’re in an area where any remaining dye won’t drip off and ruin the flooring/ground. 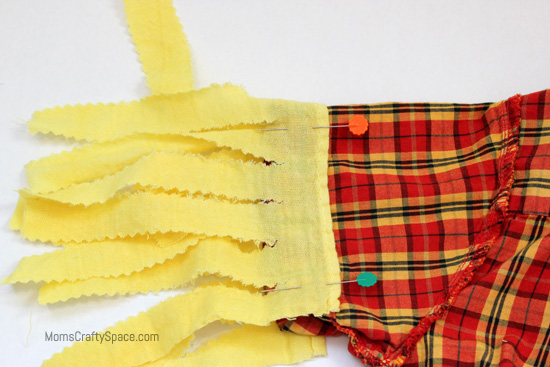 I cut the tea towel into 5″ wide strips (each strip was the length of my tea towel, approx 20″ long), and then used my pinking shears to cut 3/4″ perpendicular strips to create “hay” for my scarecrow. I left about 1″ at the edge so that I could sew it on to my costume. I flipped the sleeves inside out and attached the hay with a quick hand stitch. You could totally do this part on a sewing machine even faster, but my desk was messy enough that it would have taken me even longer to clean it off before I could pull out my machine. I sewed the strips of hay to each shirt sleeve and to the bottom of the overalls pants cuff. 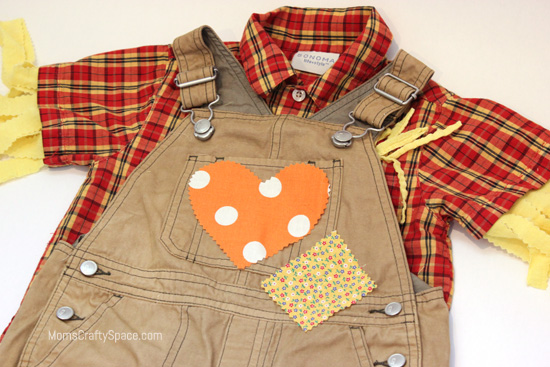 I grabbed some of my scrap fabrics in coordinating colors and cut out patches for the costume. Maybe I’m just way too obsessive compulsive, but I played around with the layout of the patches for quite awhile before I finally settled on patch locations and fabric choices. I hand stitched each patch to the overalls with contrasting embroidery thread so that it would look more whimsical and sweet. 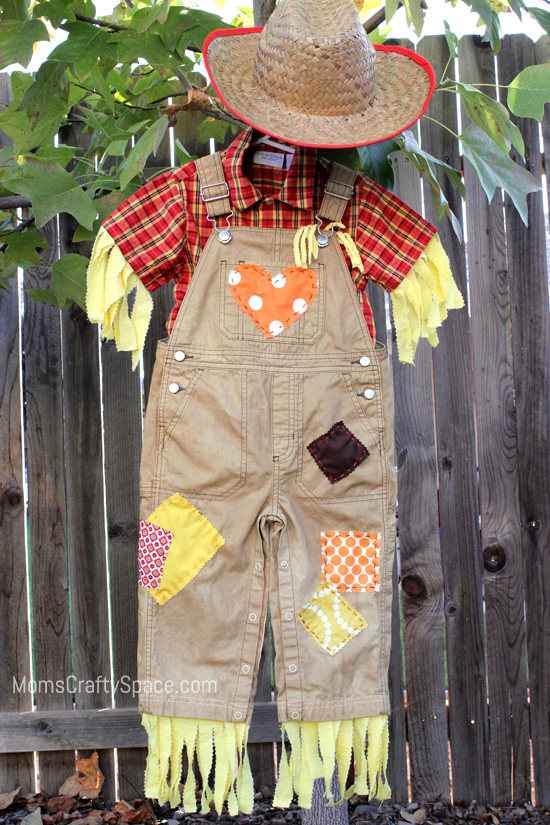 I totally {LOVE} the way it came out! These autumn colors are much better than the original clothing that I had to work with, don’t you think? 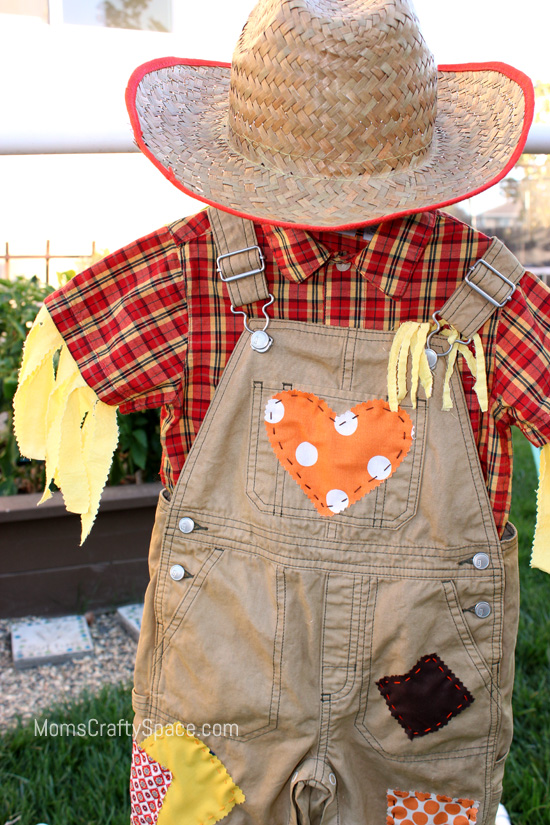 Now I just need to see if I can wrangle my two-year-old into his costume so I can get a picture of him actually wearing it to show you! I can’t wait to see him in it!
For more great Halloween projects using RIT Dye check out the links below:

I wrote this post as part of a paid campaign with RIT Dye and Blueprint Social. All opinions expressed are 100% my own.