↑
Home » Craft » Outdoors » How to Build a Green Bean Tepee 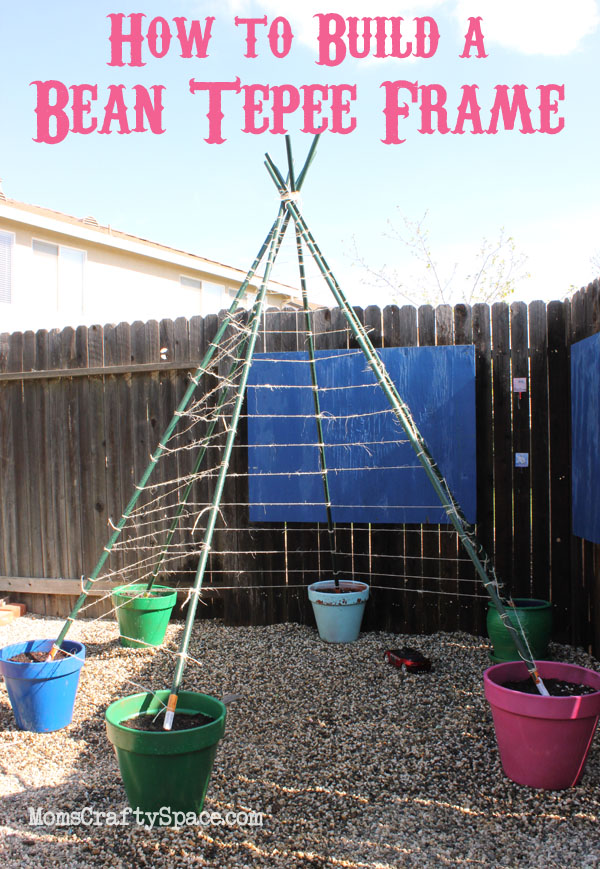 Building a green bean tepee has been on my gardening to-do list for the past few years, but for some reason or another it’s always the project that gets pushed aside for something more urgent, and I inevitably find myself too late in the season to start it. I was determined not to let that happen again this year, so today the boys and I set up the frame for our tepee.

Our bean tepee is going to reside in the corner of our yard that houses the boys’ rock pit, so instead of digging holes and planting in the poor quality soil we decided to elevate our tepee by placing the poles into large terra cotta pots. This way the boys won’t lose much space in the way of playing in the rocks, and they won’t have to be quite as careful when they’re playing with dump trucks near the delicate new seedlings. 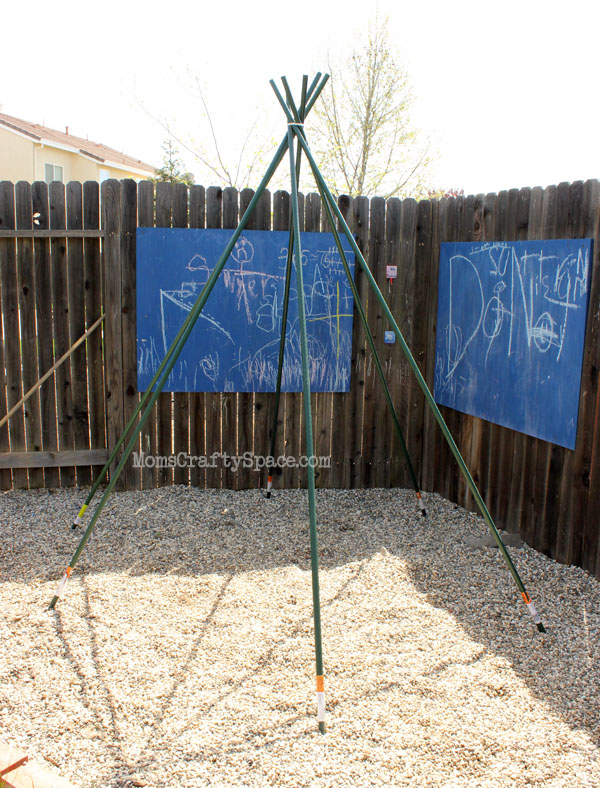 I purchased (6) eight foot plant stakes from Home Depot for the frame. I had originally intended to buy bamboo stakes, but once I saw how durable and strong these plastic covered steel stakes are I was sold. I know that these super stakes will hold up through a neighborhood’s worth of crazy boys playing in the tepee!

To bind the stakes together I laid them on the ground in a bundle and tightly lashed them all together with twine about 8″ away from one end. This will allow you to stand your tepee up and manipulate their positioning until you are ready to give them a stronger final joining later. 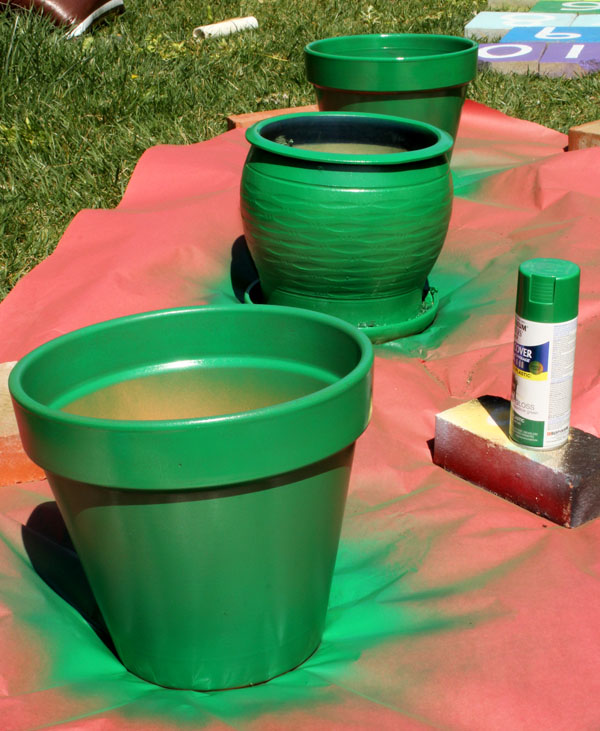 We gathered up a few 12-14 inch pots that we had around the yard, and we spray painted them green. At first the boys wanted to paint all six of the pots green so that they would eventually become camouflaged against the greenery of the tepee, but in the end they decided that they liked the colors of three of the pots that we had painted last year so we kept them as-is. 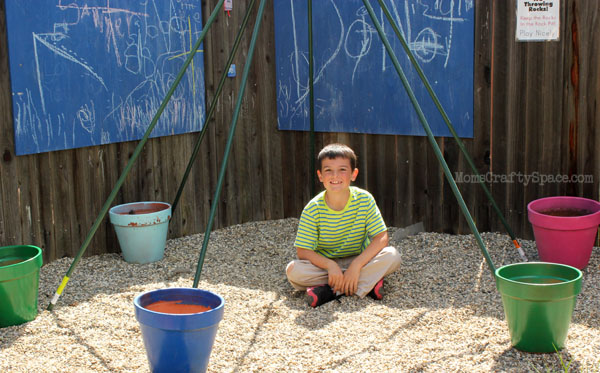 I grabbed my helpers and they laid out the position of our pots. The boys decided that it would be way cooler if the door to their tepee was on the side so that it’s hidden from the front view. 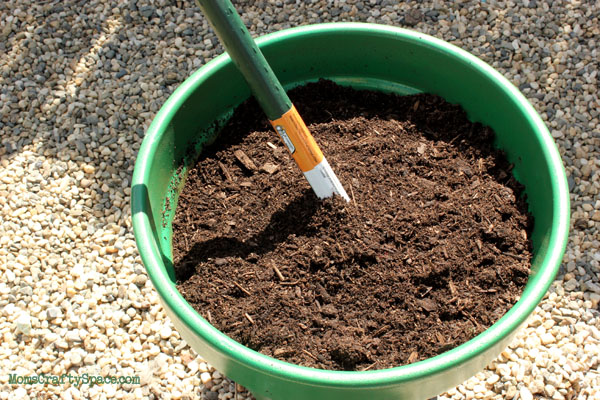 To add some stability and weight to our pots, we filled the bottom 3″ with gravel before filling up the rest with potting soil. Arrange the poles so that they’re aligned with the center of each pot and push them down towards the base of the pot. 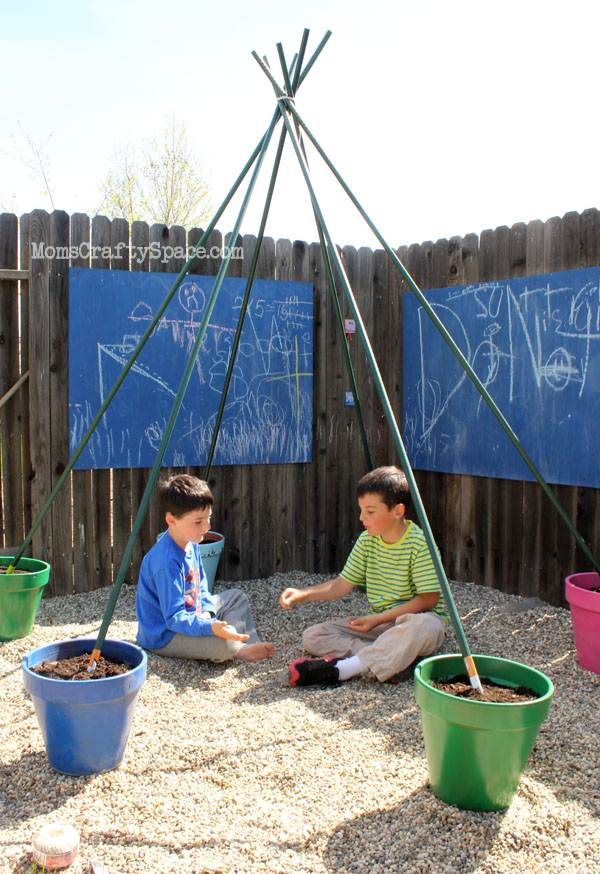 We made sure that at least two kiddos will comfortably fit inside of the tepee hideout. 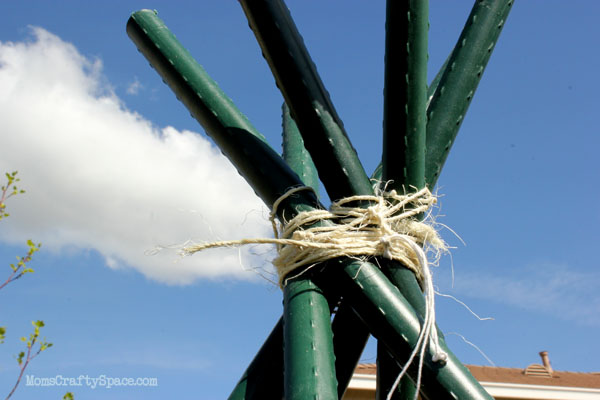 Once I was happy with the positioning, I used a heavier weight sisal twine to tie the tops together. I wrapped the entire bundle of stakes several times before weaving and wrapping around each individual post to tie them all together. 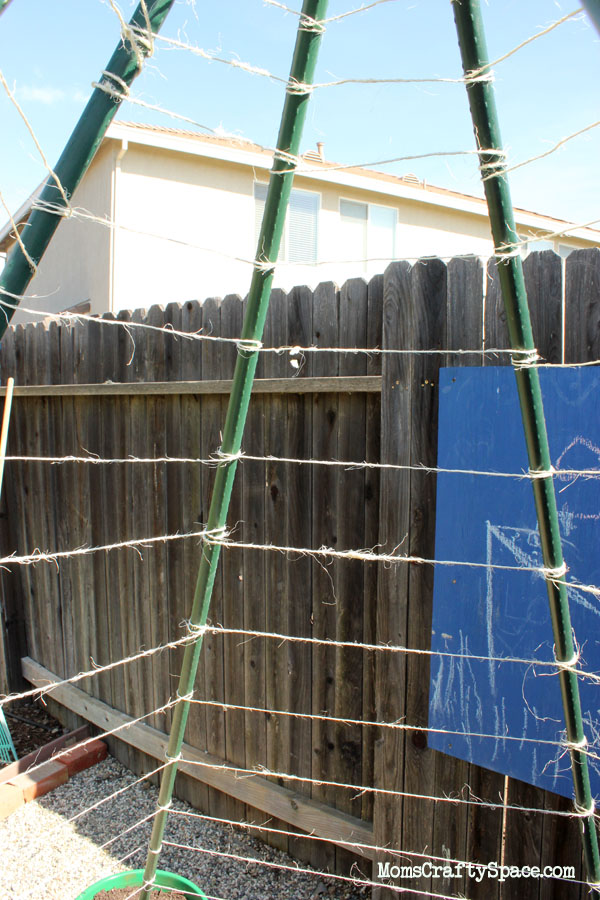 With the top secure, I started wrapping the twine down the structure to create a framework that the green beans will be able to climb on. I moved from pole to pole, wrapping twice around every pole each time. Because we wanted to leave an open door area, I worked my way from left to right and then back from right to left leaving one section un-twined. 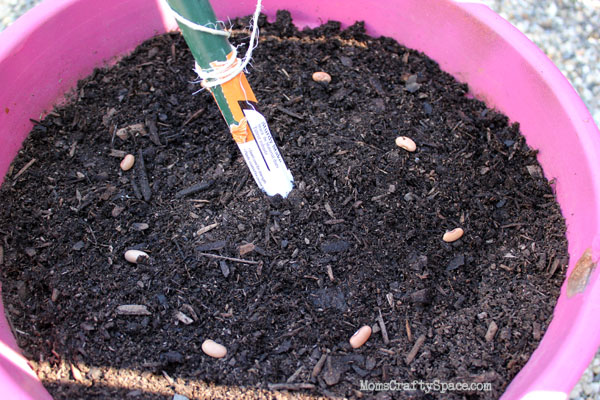 We planted two different versions of pole beans (eight seeds around the base of each pole), and added a few morning glory seeds as well since they’re my favorite climbing flower. 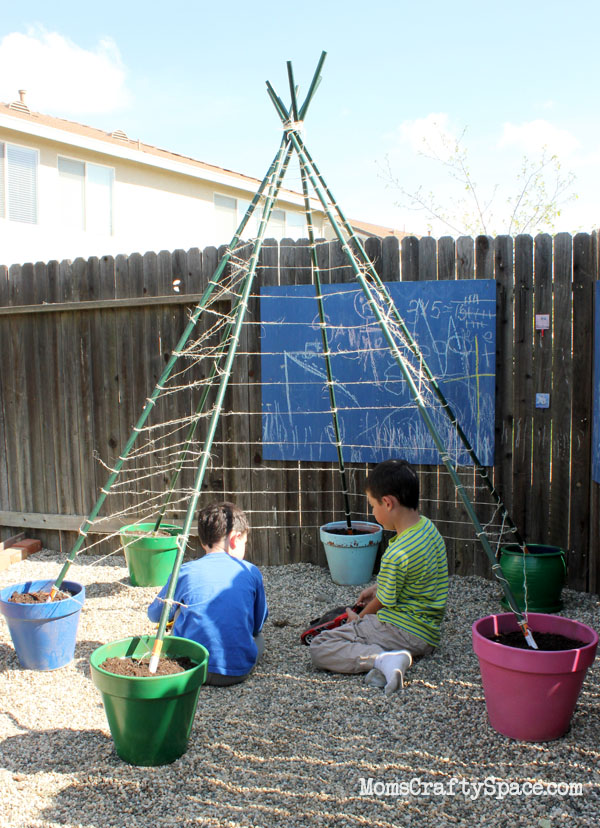 These guys can’t wait until their tepee starts to grow and fill in, but even these bare poles and twine are providing a space full of magic and imagination!