↑
Home » Craft » Home Decor » The Tale of the Green Bookcase 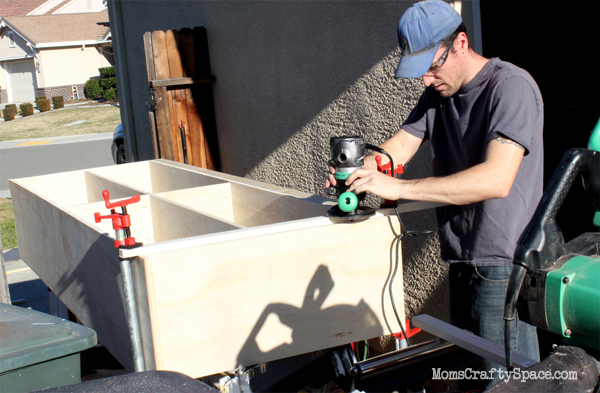 Once upon a time, there was a girl who took a vow that she would to learn how to use power tools… 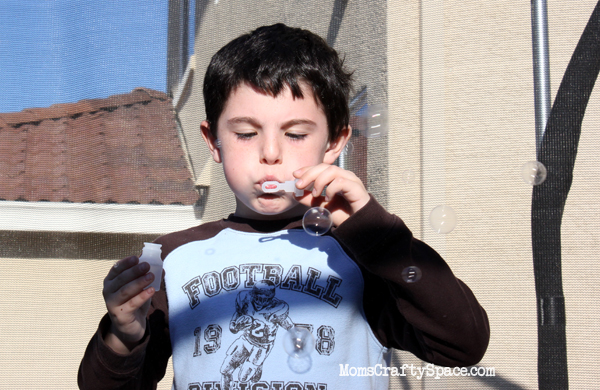 …but her son said, “Hey, Mom! Let’s go blow bubbles and jump on the trampoline with the parachute guy!” His forces of persuasion were far too strong, and so she abandoned her dreams of miter saws and nail guns in favor of giggles and bouncing (luckily for the girl she was married to a very skilled man who enjoyed building all the items on her wishlist!). 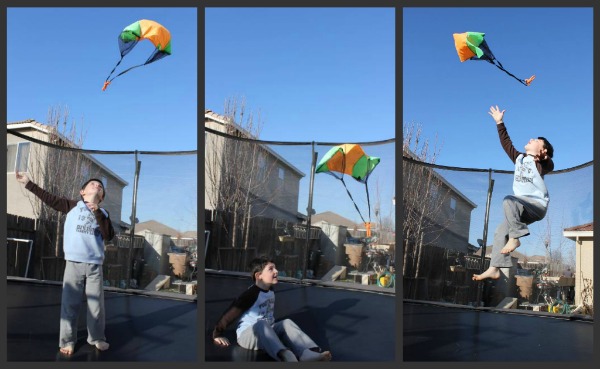 * Yep, I’m wearing sweatpants and Muk Luks. The world must have be ending if I ventured out of the house in sweats (actually, I was starting to feel like I was getting sick). I totally wear those shabby Muk Luk boots every.single.day. I got them right after Thanksgiving, but they look like I’ve had them since 1996. When winter is over that they will probably need to be surgically removed from my feet. It’s a bad addiction. Anyway, back to the story… 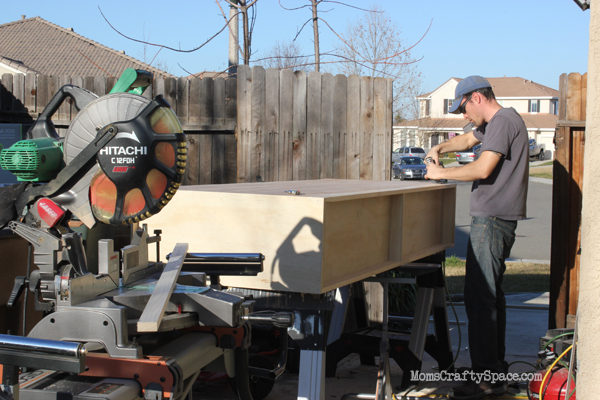 While the girl and the boy jumped and laughed, the handy hubby was hard at work building a new custom bookcase for their dining-room-turned-school-room. He was really much better and faster at it than the girl would have been anyway. 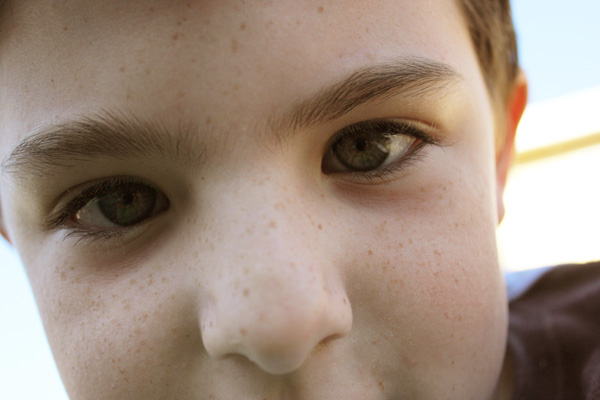 Meanwhile the girl and boy had worn themselves out with jumping, and she was now busy teaching the boy how a camera aperture and shutter speed works. It’s really quite fascinating when you’re only five-and-three-quarters-years old. 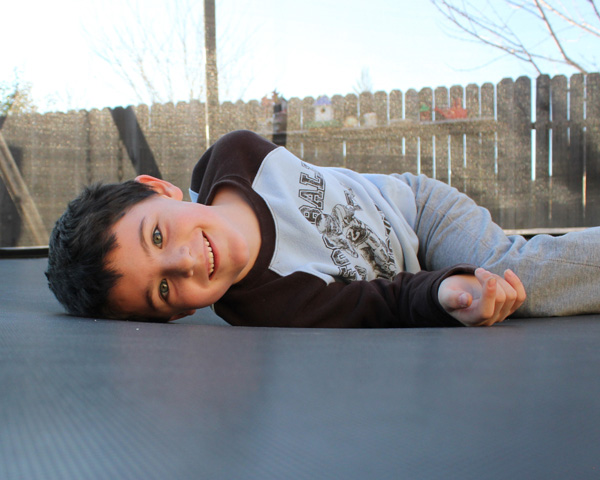 The girl wandered over to check on her handy hubby’s progress, only to discover that the project had been abandoned, and he was nowhere to be found. She finally found him curled up in a cozy recliner watching the Superbowl with a kitty and a kiddo in his lap. 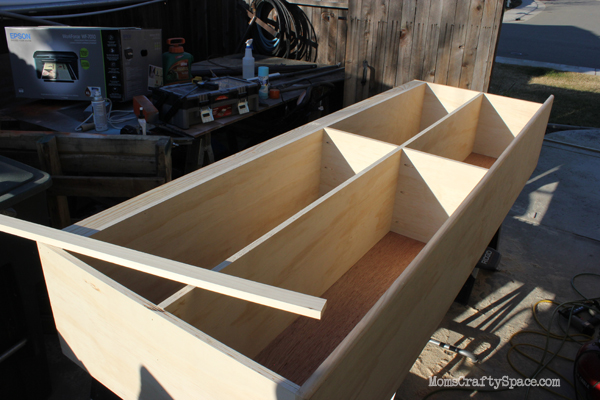 After his team lost the big game (booooo!), the man finished trimming out his bookcase and brought it indoors. It fit perfectly in its new home and was everything that the girl had been dreaming of for a very, very long time. 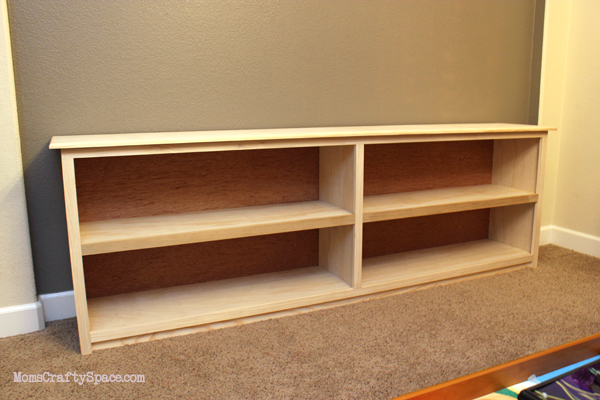 The girl really wanted to seal the wood and keep its natural finish, but it looked far too out of place among all of the other darker wood furniture in their home. The girl was disappointed and unispired because she didn’t want another piece of dark wood furniture in her house, but she also didn’t want to cover up the grain of that lovely wood with paint.

Unfortunately, she didn’t need to worry about having to make that decision any time soon. She was struck down by the horrible flu, and the lovely empty bookcase sadly sat alone and waiting to be finished for the next week. 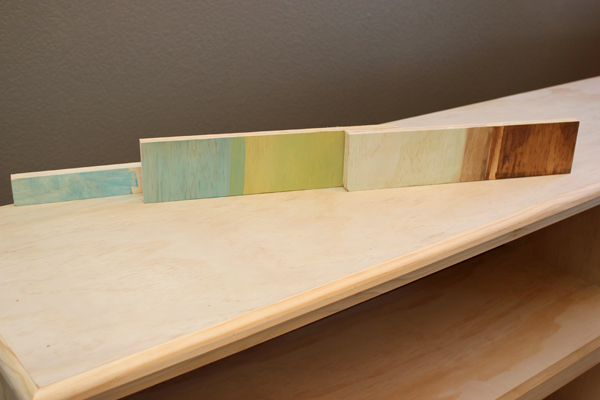 When the girl was finally able to drag herself out of bed, she went straight away to the extra wood scraps and started experimenting with different washes, stains and painted finishes. Her brain was fried from the illness, so she wasted an entire afternoon covering both sides of six pieces of wood with about twenty different color options. All that experimentation led to nothing but more indecisiveness, so she left the final decision to the guy who weilded the power tools. 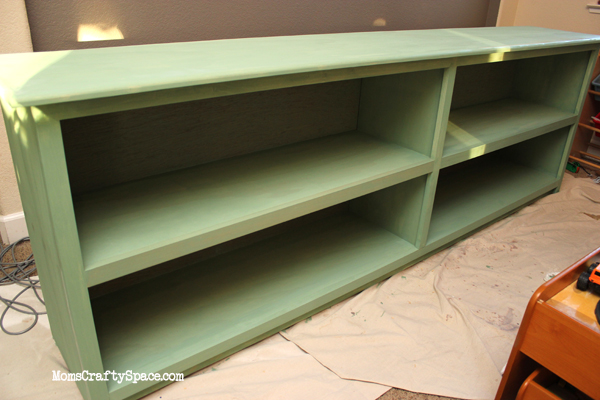 The handy hubby decided upon a jade green wash with a waxed finish. The girl wasn’t so sure about the color choice, but since she was still recovering from her sickness she trusted his judgement and painted, painted, painted and waxed until it was all finished. 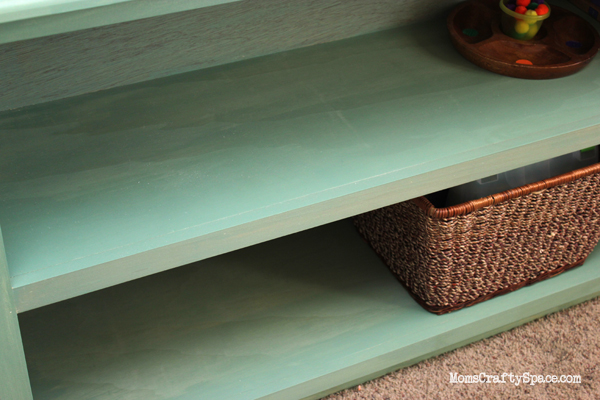 She loved that the grain of the wood was still visible beneath the thin layer of paint and wax, and she grew to love the subtle splash of color that the bookcase gave to the new school area. She couldn’t wait to finish up the rest of the room! 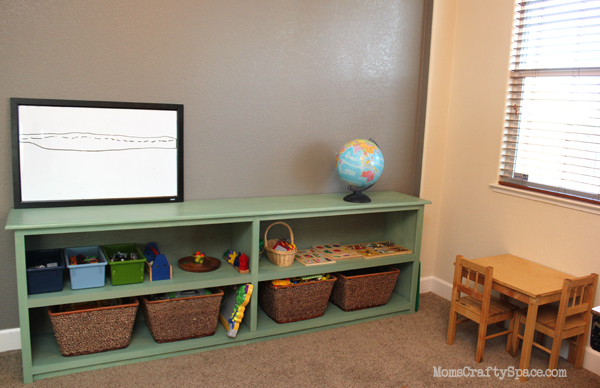 The girl made plans to finally re-finish her boys’ vintage school desks (yes, she’s been saying that for two years, but she really means it this time!), and they all lived happily ever after. 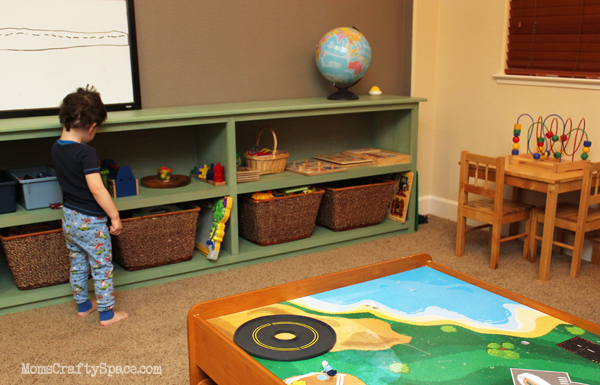